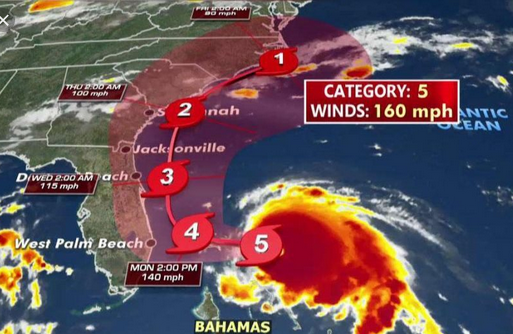 Hurricane Dorian, a powerful Category 5 storm, roared over the Bahamas on Sunday making landfall on three different islands with punishing sustained winds of 185 mph and gusts that reached speeds of 225 mph.

Dorian proved to be a historic hurricane, the strongest ever during modern record-keeping to make landfall in the Bahamas and, with sustained 185-mph winds, it’s now the second-strongest hurricane, by wind speed, ever recorded in the Atlantic basin. Dorian now stands behind only Hurricane Allen, the strongest storm ever recorded in the Atlantic basin. Allen thundered over the Gulf of Mexico in August 1980 and achieved sustained wind speeds of 190 mph before making landfall near the U.S.-Mexico border.

Hurricane Dorian made its initial landfall at Elbow Cay, Abacos, in the Bahamas. The eye of Dorian then made a second landfall on Great Abaco Island near Marsh Harbour in the Bahamas. The third landfall came later on Sunday night, the eye encroaching the eastern end of Grand Bahama Island. Maximum sustained winds were 185-mph during the first two landfalls, dropping to 180 mph for the third. Gusts of 225, as AccuWeather Extreme Meteorologist Reed Timmer pointed out, were equivalent to the winds of an EF4 tornado.

“I have seen utter devastation here in Marsh Harbour. We are surrounded by water with no way out,” ABC News correspondent Marcus Moore told the news station. “Absolution devastation, there really are no words it is pure hell here on Marsh Harbour on Avoca Island in the norhtern part of the Bahamas.”

Since 1851 the Treasure Cay area in the Abacos Bahamas has experienced three major hurricanes, all of which were Category 3 hurricanes, according to the NWS Charleston. Dorian, currently a Category 5, is the strongest by far to affect the area. Hurricane Andrew in 1992 is the only Category 5 hurricane to pass through the Bahamas. In Freeport on Grand Bahama Island, residents hunkered down in a church that was being used for a shelter. Photos and videos surfacing on social media showed powerful winds whipping palm trees, flooding and some severe damage to residences.

“This is probably the saddest and worst day for me to address the Bahamian people,” the Bahamas Prime Minister Hubert Minnis wrote in a Twitter postSunday afternoon. “We are facing a hurricane that we have never seen in the Bahamas. Please pray for us.” 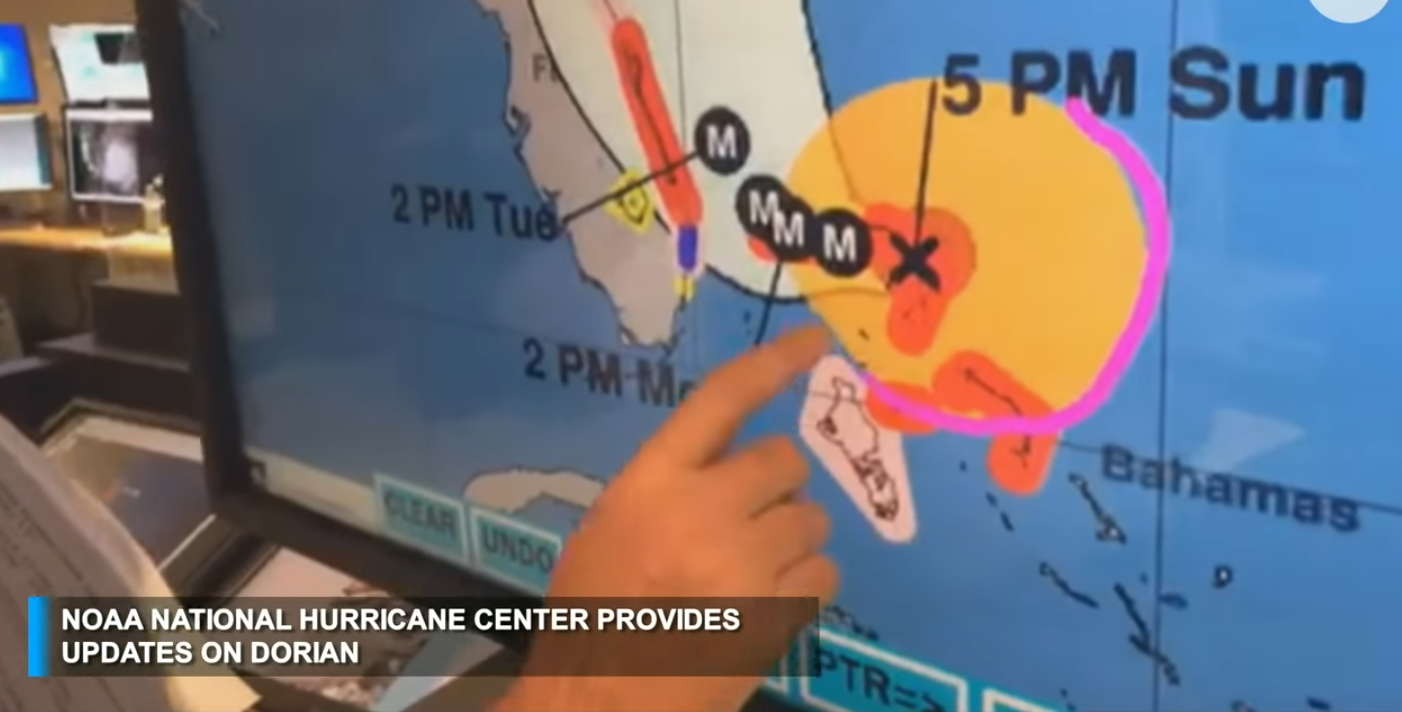 In addition to some places in the Bahamas seeing up to 24 inches of rain, severe storm surge could be devastating.

By Sunday evening, Dorian had slowed to a crawl, swirling west at 5 mph, about 135 miles east of West Palm Beach, Florida and only 55 miles east of Freeport in Grand Bahama Island. Dorian has maintained its status as a Category 5 storm with maximum sustained winds of 180 mph. As the storm slowly drew nearer to Florida’s Atlantic coast, the National Hurricane Center issued its first hurricane warnings and watches for parts of the Sunshine State.

A baby sleeps inside a church that was opened up as a shelter for residents who will wait out Hurricane Dorian in Freeport on Grand Bahama, Bahamas, Sunday, Sept. 1, 2019.

Meanwhile, the first mandatory evacuation orders were issued on Sunday for St. Johns County, St. Lucie County and Martin Countyand parts of Palm Beach County, including where President Donald Trump’s Mar-a-Lago resort is located. The Miami Herald reportedthe Palm Beach evacuations are for those in low-lying areas and that the county began opening shelters on Sunday.

Florida Gov. Ron DeSantis suspended traffic tolls after the first evacuation orders went into effect at 1 p.m. “Hurricane Dorian is one of the strongest storms that’s ever threatened Florida. If you live in a county with evacuation orders, please heed the call,” DeSantis implored Floridians in a post on Twitter.

President Trump has also been issuing warnings about the power of Dorian. “It seems to be one of the biggest hurricanes we’ve ever seen, and that’s a problem,” Trump told reporters outside the White House on Sunday, discussing the changing forecast for where Dorian might make landfall in the U.S. “It seems to be going up toward South Carolina, toward North Carolina. Georgia’s going to be hit. Alabama’s gonna get a piece of it,” Trump added. He posted a similar statement on Twitteras well.

The latest weather forecasts indicate that Alabama will not see any impacts from Dorian. The five-day forecast shows sunshine and temperatures in the 90s for Birmingham for the first week of September. But from Florida up through Georgia and the Carolinas, people were on edge. States of emergency have been in place for days.

While Dorian is a very powerful storm, AccuWeather meteorologists point out that it’s small in size, something that could be critical depending on the track it takes as it approaches the southeastern coast of the U.S. Satellite images of Dorian still portray the hurricane as a relatively small feature. Hurricane-force winds only extend outward from the hurricane by about 30 miles, while tropical-storm-force winds extend outward from the center of the hurricane by about 105 miles — a size that is roughly half of what is average for a hurricane, AccuWeather hurricane experts said.

Forecasters say Dorian could still deliver a glancing blow to the east coast of Florida, bringing hurricane conditions from Jupiter Inlet to the Volusia-Brevard County Line and tropical storm conditions up and down much of coast, even if its eye stays offshore and never makes landfall there. Beyond that, landfall is not out of the question for the Carolinas as Dorian slowly marches up the East Coast this week.

In places along the Florida coast like Melbourne Beach, residents continue to hold their breath.

“A lot of folks have boarded up. You see the shutters up, folks not ready to believe that this is going to stay off the coast,” AccuWeather National Weather Reporter Jonathan Petramala said.