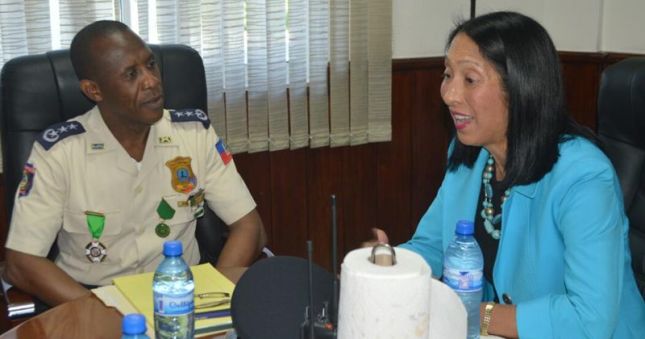 U.S. Ambassador to Haiti, Michele J. Sison, had a meeting with the new interim Director General of the National Police of Haiti, Normil Rameau, on Friday. The meeting which took place three days since his taking the oath of office appears not in the presence of either Ministers of Foreign Affairs, Justice or Defense.

If specific issues were discussed, they were not made public. The US Embassy via its Twitter account said:

“Ambassador Sison [#AmbSison] met with the DG a.i. of the PNH [@phn_officiel] Rameau Normil accompanied by a team from the embassy to discuss a number of aspects of partnership between the embassy an the PNH, comprising of collaboration in terms of training and application of law… we can’t wait to continue our coordination with the PNH to ensure the security of Haiti and the region [@StateINL].”

Even in the context of a failing state, interference by the U.S. Embassy in Haiti’s internal political affairs continue to be criticized among an overwhelming number of Haitian citizens. Many feel security officials in the country are far more willing to protect Americans at the expense of efforts to protect Haitian citizens.

As well, it is in a context where questions are being raised about the release and departure of several “mercenaries”, former U.S. military, who were arrested in February in possession of heavy firearms, munitions, tactical gear and multiple fake license plates, that Ambassador Sison’s sit down with Director Normil is taking place.