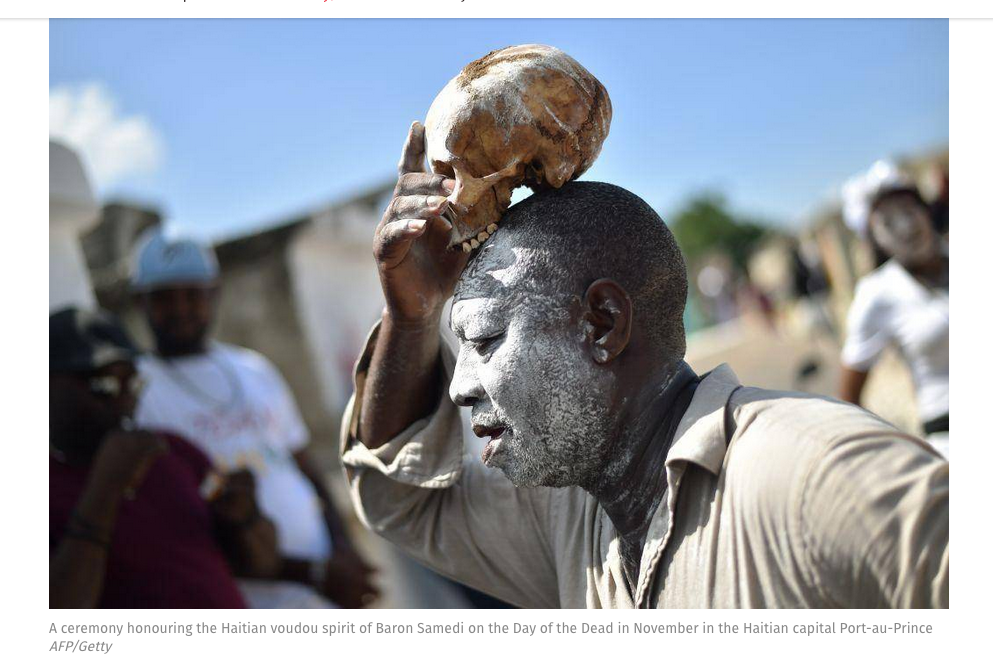 In May 2012, I had an accident at work. Not a bad accident, mind – the most mediocre one you can imagine. I reached for a cup of coffee, something in my neck slipped and nicked a nerve (at least that’s the theory), and just like that, I was plunged into the world of chronic pain. It took me four years to get out.

After going the medical route for two years, with zero progress – and having nothing to lose, because I wished I was dead – I decided to look at alternative therapies. I’d been a travel journalist before the accident, so going to places like Bali, South Africa and China to look at traditional medicine and healing felt, in a way, like I was reclaiming a part of my identity. Plus, researching chronic pain – which is essentially in your brain – and learning more about the placebo effect and mind-body connection, I wondered what other cultures had to offer. Herbert Benson, the Harvard professor who’s big on the mind-body connection, has written that traditional healers in Zimbabwe have a better grasp of patient psychology than Western doctors. That was the starting point for my book, Heal Me.

I went to Haiti in 2015. I’d read enough about vodou – not racist, Westernised “voodoo” but the real thing – to think it could help me. I wanted to meet houngans (male priests) and mambos (female priests) who, I thought, might psych me out of my pain.

I wasn’t expecting what I found – a beautiful country, magazine-worthy beaches, people who welcomed me, keen to share their culture. After four days of what felt more like a holiday than a research trip, I checked in at the Oloffson hotel in Port-au-Prince – famous for its ‘gingerbread house’ architecture, its starring role in Graham Greene’s The Comedians, and its houngan owner. Could the loa (spirits) like Baron Samedi (a loa of the dead) and Erzulie Freda (a capricious female loa who demands presents from her followers) help me?

Here’s what happened, in an extract from the book.

Heal Me, published by W&N, is out now 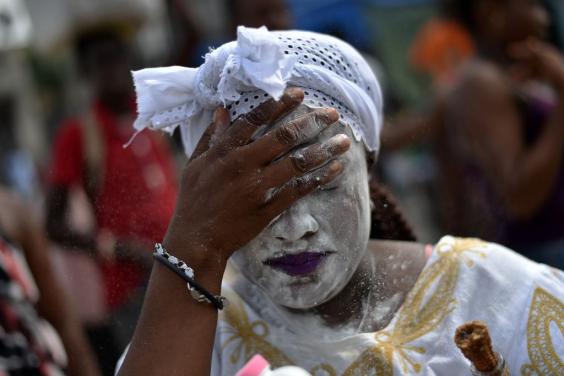 “The owner is a houngan,” I said to Serge as we pulled up at the Oloffson to be confronted by a lifesize Baron Samedi (in the stairwell leading to the gingerbread house.

“I know,” said Serge. “I know him slightly.” Serge agreed to introduce me, but he was nowhere to be found.

Richard Morse was his name. He was half Haitian, half American, and having stalked him online, I’d decided he would fascinate me. He’d grown up in New England but moved to Port-au-Prince in 1987 to run his mother’s family’s hotel. He was a houngan, according to the Economist, and had a vodou rock band, RAM, that played every Thursday night. Of course, the Thursday I was in town, it was cancelled.

I was at the check-in desk, asking (as the doom-laden TripAdvisor reviews had exhorted) whether I might be able to see a couple of rooms, when an American voice behind me said, “Put her in the Graham Greene.” I turned round to find him studying me with an ironic smirk. At six foot, I was used to bending down to talk to people, but with Richard Morse, I came up to the bottom of his ponytail.

“You’re a writer, right? Gotta put you in the Graham Greene,” he said. I had tweeted him, asking for an interview (I hadn’t mentioned what about, lest, like everyone else, he stopped replying to me). He was in America till Saturday, he’d said, and I’d written back, great, I’ll come Saturday. And he had not replied.

“Is it really where he stayed?” I asked with the ingratiating smile I usually reserved for doctors.

“I dunno,” said Richard Morse. “Probably not.” He swallowed a laugh. “You wanted to talk to me, right?”

“I’ll be around,” he said, and loped off. An unimpressed-looking woman showed me to my room – in an annexe which, by the looks of it, might not have been updated since Greene’s stay – and brought a pitcher of water. In the time it took to climb the stairs, the mosquitos drained approximately one third of my blood. I showered in case they were attracted to ingrained sweat, and put on the sundress that the aid worker on the plane had prophesied would get me killed. I took out my diary to circle my next antimalarial dose. Then I smothered myself in citronella and walked over to the main building.

There was reggae playing in the bar, where two busts of Jean-Jacques Dessalines monitored a taciturn barman. I walked through onto the patio and ordered a G&T, as I imagined the war correspondents did when they stayed here – for those reporting on elections, coups or everyday violence, the Oloffson was the only place to be. Suddenly, Richard Morse was sitting opposite me.

I made small talk about the hotel – how wonderful! How historic! What a place to be sitting, here where Jackie O, Mick Jagger and Gielgud had all sat! – and he looked disgusted. Richard Morse clearly didn’t do small talk. I took a swig of my G&T.

“Who told you that?” he asked.

He shook his head: “I thought you wanted to talk politics.” Richard Morse’s outspoken Twitter feed – anti-government, anti-American government – made him the first port of call for lazy journalists. 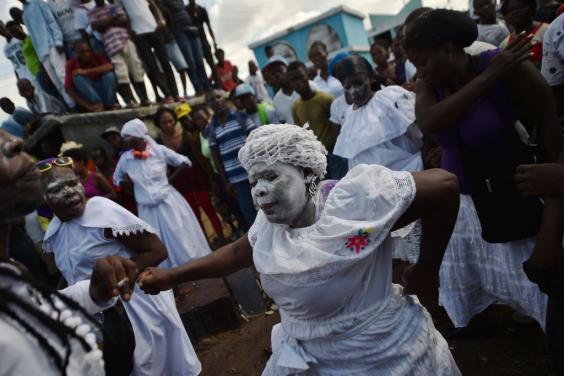 A devotee of Baron Samedi (AFP/Getty)

He’d been brought up atheist – “as a white man”, as he put it – in America. His father had been an atheist, his mother a mambo. Richard had gone to Haiti for the first time at 16, and fallen for it. And the feeling had been mutual: on a subsequent visit, he’d heard the loa knocking on the window, calling him all night. He’d gone on to study anthropology at Princeton, but when his father died, he’d returned to Haiti and become a houngan.

Talking about his training was the first time Richard Morse really smiled. “It was unbelievable,” he said, with the bliss of a man who’d seen God. “It made me realise that it’s all connected, yeah? Vodou, Protestants, Catholics, the Pope … Princeton, Haiti … it’s all connected.” I remembered Jero Pura telling me to pray to my own god. What if it was all connected? What if vodou wouldn’t just shock my pain away, but might actually heal me?

He didn’t do it as a vocation, he was at pains to point out. He only did it to “take care of stuff”.

I swallowed. It was becoming clear that I was the Oloffson’s only guest tonight, but I couldn’t leave Haiti without some kind of closure. I reminded myself that the scene from Live and Let Die which had played in two decades of nightmares – Roger Moore and Jane Seymour in the graveyard, Baron Samedi erupting from the earth and laughing them to hell – was a film, voodoo not vodou, and that the nocebo effect might reset my brain.

“What kind of stuff?” I asked.

“I mean, someone might come along,” said Richard Morse, and he paused. “And I might think, you know, maybe I can do something for that person. I don’t – I mean, you know – I don’t have a sign outside saying ‘I do readings’, or whatever.”

“And if someone comes along,” I said, casually, “and you think you can do something for them, do you tell them?”

“I’ve helped a few people,” he said, cryptically. And then he told me.

He’d helped one woman’s cancer, though he didn’t want to take official credit for that. Been called to another who’d just come back from the dead to “get her going”. Healed the paralysed arm of a woman selling art by the roadside at Saut-d’Eau, just like that. My ears pricked up.

“Could she immediately lift it?”

He paused. “It’s a miracle,” he said, jazz hands in his voice. Then he said, more quietly: “Frightening.” He had stopped after that, because he didn’t want to feel obliged to go around healing people.

The nape of my neck was prickling, and for once it wasn’t a mosquito bite.

We circled each other in small talk, and then I tried again. Do you think you could heal anyone, I asked. He said he didn’t know. I said: you should try. Once in a while, he said, I come across someone and – he paused, stared into the distance – give it a shot. Ask God to help this person.

I told him about the coffee, and the diagnosis, and the COPE course, and the drugs, and Kevin and Bali and everyone who’d tried to be my Jesus but hadn’t been. I said: maybe you’re it. 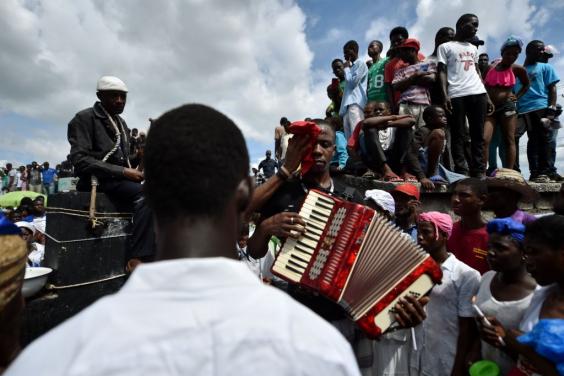 A vodou ceremony in Cite Soleil, near Port-au-Prince (AFP/Getty)

“So this is what you’re doing,” he sighed. “Looking for someone to fix you.”

“I just want someone to make me not in pain,” I said. And then, in a small voice, I added: “And maybe you’re that person.”

So would you help me, I asked.

Would I try, he said.

Would you try, I said.

Would you like that, he said, a hint of anger in his voice.

We both studied our drinks. I’m still in love with you, girl, Alton Ellis sang from the bar.

Richard Morse dragged the air into his nostrils. Once. Twice. I kept my eyes on my drink.