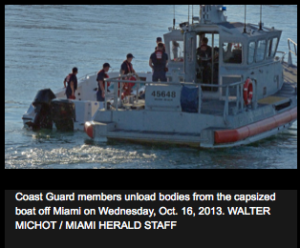 Allegedly drunk and high, Davis was driving a 25-foot motorboat from Bimini when the boat carrying 13 migrants capsized southeast of the entrance to the PortMiami in October.

Four Haitian women became trapped and drowned. Davis and crewman George Lewis, 38, jumped off the boat before it capsized.

Another passenger, Sean Gaynor, 37, of Jamaica plead guilty to illegally re-entering the U.S.

U.S. federal authorities released four of the Haitian survivors – Pierre Louisias, Widly Cajuste, Fallonne Alouidor and a 15-year-old – from immigration custody. The status of a fifth survivor, Vincent Anderson, is not known.

Lewis and three other individuals plead guilty to illegal reentry into the U.S as aggravated felons, according to the U.S. Department of Justice. Each face up to 20 years in prison.Many of the boat passengers did not know how to swim and did not have life jackets.

The dead women were later identified as Kerline Mercy, 25, Lodilia Escarment, 36, and Carmen Valeris and Woodline Alexis, both in their 30s.

Passengers originally had boarded another boat in the coastal city of Port-de-Paix in northwest Haiti. They were then taken to the Bahamas where they boarded the boat to Miami, which had stalled multiple times before capsizing.

Coast Guard found the survivors after one had dialed 911 on a cell phone.