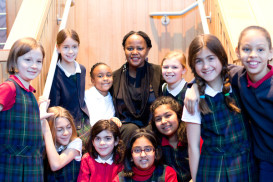 Danticat is a storyteller who navigates the terrain of lives lived in both Haiti and America. Her award-wining memoir, Brother, I’m Dying, is a narrative whose threads are effortlessly woven between these two lands. Her fiction draws on this same tension in suchworks as Breath, Eyes, Memory and The Dew Breaker, which was awarded the Story Prize in 2005.

Danticat’s day began with lower school students where she explained the process of writing her first children’s book, Eight Days. The girls asked Danticat questions ranging from did she had always known that she wanted to be a writer (yes!) to what was her favorite book at their age (Madeline, because, as Danticat explained, she grew up in a house without her parents that was full of children, just like Bemelmans’ heroine had).

Danticat’s next stop was tea with a group of students who will be studying Haitian legends and folktales in French this spring, along with other students hoping to travel to Haiti with the Princeton-based service group, Konetke.

Lunch was spent with Stuart’s “Senior Scholars,” a select group who have taught the works and biography of Edwidge Danticat to students in preschool through grade eight. Danticat delighted them with stories of her life, her writing and and even how to cook plaintains.  The seniors talked about teaching Haitian culture, food, literature and Danticat’s stories.

The day concluded with a reading for middle and upper school students. Danticat read selections from Behind the Mountains and Anacaona: Golden Flower; she also answered questions about her memoir, Brother, I’m Dying, which all upper school students had read. When the reading concluded, more than 100 girls lined up to have a book signed by Danticat, before she flew home to Miami.

Danticat won a MacArthur Foundation “genius grant” in 2009, and most recently the Langston Hughes medal and the OCM Bocas Prize for Caribbean Literature for Create Dangerously: The Immigrant Artist at Work.  In that book, which examines what it means to be an immigrant writer from a nation in conflict, Danticat writes, “Create dangerously, for people who read dangerously. This is what I’ve always thought it meant to be a writer. Writing, knowing in part that no matter how trivial your words may seem, someday, somewhere, someone may risk his or her life to read them.”