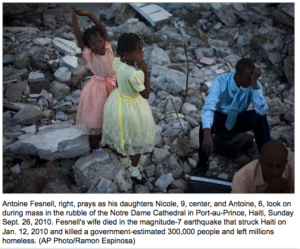 By JONATHAN M. KATZ and MARTHA MENDOZA (AP) – 5 hours ago

PORT-AU-PRINCE, Haiti — Nearly nine months after the earthquake, more than a million Haitians still live on the streets between piles of rubble. One reason: Not a cent of the $1.15 billion the U.S. promised for rebuilding has arrived.

The money was pledged by Secretary of State Hillary Clinton in March for use this year in rebuilding. The U.S. has already spent more than $1.1 billion on post-quake relief, but without long-term funds, the reconstruction of the wrecked capital cannot begin.

With just a week to go before fiscal 2010 ends, the money is still tied up in Washington. At fault: bureaucracy, disorganization and a lack of urgency, The Associated Press learned in interviews with officials in the State Department, the Senate Foreign Relations Committee, the White House and the U.N. Office of the Special Envoy. One senator has held up a key authorization bill because of a $5 million provision he says will be wasteful.

Meanwhile, deaths in Port-au-Prince are mounting, as quake survivors scramble to live without shelter or food.

“There are truly lives at stake, and the idea that folks are spending more time finger-pointing than getting this solved is almost unbelievable,” said John Simon, a former U.S. ambassador to the African Union who is now with the Center for Global Development, a Washington think tank.

Nor is Haiti getting much from other donors. Some 50 other nations and organizations pledged a total of $8.75 billion for reconstruction, but just $686 million of that has reached Haiti so far — less than 15 percent of the total promised for 2010-11.

The lack of funds has all but halted reconstruction work by CHF International, the primary U.S.-funded group assigned to remove rubble and build temporary shelters. Just 2 percent of rubble has been cleared and 13,000 temporary shelters have been built — less than 10 percent of the number planned.

The Maryland-based agency is asking the U.S. government for $16.5 million to remove more than 21 million cubic feet of additional rubble and build 4,000 more temporary houses out of wood and metal.

Last week the inaction bore tragic results. On Friday an isolated storm destroyed an estimated 8,000 tarps, tents and shacks in the capital and killed at least six people, including two children. And the threat of violence looms as landowners threaten entire camps with forced eviction.

In Washington there is confusion about the money. At a July hearing, Ravij Shah, director of the U.S. Agency for International Development, thanked members of Congress for approving the funds, saying, “The resources are flowing and are being spent in country.”

It wasn’t true then, and still hasn’t happened.

When the earthquake hit, U.S. agencies sent troops, rescuers, aid workers and supplies to the devastated capital, Port-au-Prince. On March 24, President Barack Obama asked Congress for $2.8 billion in emergency aid to Haiti — about half to pay back money already spent by USAID, the Defense Department and others. An additional $212 million was to write off debt.

The heart of the request was $1.15 billion in new reconstruction funds.

A week later, Clinton touted that figure in front of representatives of 50 nations at the U.N. secretariat, the president of Haiti at her side.

“If the effort to rebuild is slow or insufficient, if it is marked by conflict, lack of coordination or lack of transparency, then the challenges that have plagued Haiti for years could erupt with regional and global consequences,” Clinton said.

That was nearly six months ago. It took until May for the Senate to pass a supplemental request for the Haiti funds and until July for the House to do the same. The votes made $917 million available but did not dictate how or when to spend it. Without that final step, the money remains in the U.S. Treasury.

Then came summer recess, emergencies in Pakistan and elsewhere, and the distractions of election politics.

Now the authorization bill that would direct how the aid is delivered remains sidelined by a senator who anonymously pulled it for further study. Through calls to dozens of senators’ offices, the AP learned it was Sen. Tom Coburn, a Republican from Oklahoma.

“He is holding the bill because it includes an unnecessary senior Haiti coordinator when we already have one” in U.S. Ambassador Kenneth Merten, Coburn spokeswoman Becky Bernhardt said.

The bill proposes a new coordinator in Washington who would not oversee U.S. aid but would work with the USAID administrator in Washington to develop a rebuilding strategy. The position would cost $1 million a year for five years, including salaries and expenses for a staff of up to seven people.

With the bill on hold, the State Department is trying to move the money along by avoiding Congress as much as possible. It sent lawmakers a “spending plan” on Sept. 20 and gave legislators 15 days to review it. If they fail to act on the plan, the money could be released as soon as specific projects get the OK.

“We need to make sure that the needs of the Haitian people are not sacrificed to procedural and bureaucratic impediments,” Senate Foreign Relations Committee chairman John Kerry told the AP by e-mail. “As we approach nine months since the earthquake, further delays on any side are unacceptable.”

Asked when the money will actually come, State Department spokesman Charles Luoma-Overstreet said the department expects to start spending in the coming weeks and months. He added that $275 million in “bridge” funds were released in March and have gone toward agriculture, work, health and shelter programs — not long-term reconstruction.

Haitian advocates say that is not enough.

Jean-Claude Bajeux of the Ecumenical Center for Human Rights in Port-au-Prince said this phase was supposed to be about building semi-permanent houses.

Of course there is no guarantee that the money would lead to the successful rebuilding of Haiti. Many past U.S. aid efforts have fallen short.

“I don’t think (the money) will make any difference,” said Haitian human rights advocate Pierre Esperance. “Haitian people are not really involved in this process.”

But officials agree the funds could pay for new approaches to make Haiti more sustainable, and rebuilding projects could improve millions of lives.

The AP found that $874 million of the funds pledged by other countries at the donors conference was money already promised to Haiti for work or aid before the quake. An additional $1.13 million wasn’t ever going to be sent; it was debt relief. And $184 million was in loans to Haiti’s government, not aid.

The Office of the Special Envoy has been tracking the money delivered so far but does not know who got it. The envoy himself, former President Bill Clinton, told the AP in July and again in August that he was putting pressure on donors to meet their pledges.

On the streets of Haiti, many simply feel abandoned. Mishna Gregoire, 22, said she was happy when she heard about the donors conference. But six months later she is still in a tarp city with 5,000 other people, on a foul-smelling plaza in the Port-au-Prince suburb of Petionville.

“I thought it was something serious they were really going to do,” Gregoire said, standing amid tarps torn apart by the sudden storm. “But nothing has been done. And I don’t think anything will be done.”

Katz reported from Port-au-Prince and Mendoza from Santa Cruz, Calif.

(This version CORRECTS spelling of activist’s last name to Bajeux instead of Bajeuax.)

What more can one say without becoming obscene?