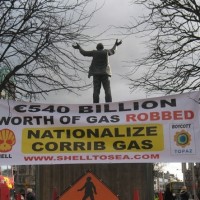 As Ireland’s government steers the country into an economic black hole there are many of us left scratching our heads as to why they are not using the massive wealth of this nation to fund the recovery and our future, and to tell the bankers where to go with their imaginary gambling debts.

As I’ve watched this country self-destruct over the last two years since the derivatives bubble was burst, I ask myself why is it happening? Why in a country rich with investment, talent, and resources and with a reasonably healthy economy with good exports, is the whole thing spiraling into a never ending cycle of un-payable debt? Believe me it is un-payable, just like all the third world debt issued by the IMF and World Bank before this.

We all know by now that the bankrupt international banks, who issue credit out of thin air, crippled the industries that support our jobs and thus our economy and sent the whole world crashing into what many believe from understanding history, is a deliberate recession from which, as history shows, the main banks will once again come out the other side more wealthy and larger than before. One need only look at the 1907 and 1929 crashes to see this consolidation process in action in the years that followed.

None of us Joe Public were in particularly problematic debt. Just the normal loans for a home and a car, nothing special. Nothing we couldn’t manage on our salaries. Yet still here we are now indebted, by the actions of a government with no mandate, to the tune of around €18,000 for every man, woman and child in the country. The interest alone will cost around €3,000 per year in extra taxes for every working person in the country before any of the principle loan is paid off.

So how are we expected to pay back this loan for a debt that we never incurred in the first place? A debt that only exists in the ups and downs of market values and shares in a fictional world of computerised credit, and not a single solid asset in sight. Yes, you guessed it. We are to pay the fictional debt with our real assets. Those being our labour, our children’s labour and our grandchildren’s labour, as well as the selling off of our public services to private corporations owned by the banks to be run for profit by them. These will include our roads for tolling, our health services, our utilities like the ESB and Bord Gais, and our water suppliers, even our ports and airports.

It doesn’t stop there though because as well as these institutions and all their associated assets, which will undoubtedly be asset stripped, the bankers are looking to take our €20+ billion of national pension fund which has been accumulated to pay the pensions of the people of Ireland in just such a difficult period. Finally, and the nub of this article, the international bankers will be given by our government the country’s tangible wealth in the form of land, minerals, our forestry, and most importantly our fuel resources in gas and oil.

Unbeknown to most people in Ireland, this country is one of the wealthiest countries in the world for natural mineral wealth. An inspection of the applications for mining licenses will reveal among other precious minerals like zinc and lead, a wealth of silver and gold buried under the ground. In fact the volumes of minerals found in Ireland per square mile make it the richest country in the world for mineral deposits. This is very valuable and why this has not been exploited is unexplained. Yet there is another kind of gold that Ireland possesses in spades that is being exploited now. The black gold !

Off the west coast of Ireland there is an enormous volume of oil and gas. The government (Dept. of Communications, Energy Natural Resources) themselves valued west coast deposits in 2008 at €540 billion although the price of oil and gas then was a fraction of what it is now. This is a resource that could give everyone in Ireland free energy in the same way that Norway funnel their oil wealth to their people, and still make huge profits selling energy to the UK and Europe.

The Corrib oil field currently being exploited by Shell, that we hear about for all the wrong reasons, is the only oil and gas field the public are aware of, but there are huge basins of oil and gas known to exist off Limerick and Kerry. One in particular called Dunquin gas field which is a proven field and is described by the operator (Exxon/Mobil) as “one of the biggest fields in the world” containing an estimated 25 trillion cubic feet of gas and over 4 billion barrels of oil. This alone could keep Ireland running for over 60 years.

The reserves off the west and north west coasts in total have been estimated at around 130 billion barrels of oil and 50 trillion cubic feet of gas. A virtual underwater Saudi Arabia. Yet it doesn’t end there. The Lough Allen Basin is a huge inland gas field in the northwest which has been known for some 40 years now and contains 9.4 trillion cubic feet of gas. Enough to power Ireland for the next 25 years but it has has yet to be tapped. There are known fields off the south coast that have yet to be announced.

Furthermore, new oil and gas basins have been announced this year off the coast of Dublin by Tony O’Reilly’s company Providence Resources and it’s UK partners. O’Reilly is also partnering Exxon in Dunquin. The east coast fields have been estimated in the hundreds of billions in value to Ireland and yet along with the riches of the west and south, the inland gas and the wealth of minerals that we are literally tripping over here, we are still bankrupt ! Does this make any sense to you?

Unfortunately over the last 35 years successive governments have eliminated all of Ireland’s rights to capitalise on it’s own resources. They have legislated away their percentage share of the gas and oil down from 50% to 0%. Yes zero. So the oil and gas is wholly owned by the oil companies royalty free. Successive ministers like Ray Burke and Bertie Ahern have been instrumental in this process which even saw the reduction in tax on oil profits to only 25% where other countries charge almost 70%. This also is only payable after all exploration and development costs are deducted as well as future decommissioning costs which effectively negates the corporation tax too.

Ireland should be the richest country in Europe with the majority of Europe’s oil and gas and fishing waters, as well as the richest mineral deposits. Yet our government has given the fisheries away to the EU, many of the mining operations are owned by foreign companies and now all the energy reserves have been given away to large multinational companies who are under no obligation to even sell the gas or oil to Ireland and we will be forced to buy our own gas and oil back at market prices from the oil giants.

This situation cannot possibly be accidental. The legislating away of our resources was a deliberate act and in this writers opinion it would seem to be a criminal act of some description. This kind of intergenerational legislative deceit could only be done with cooperation and foreknowledge and looks on the surface to be the biggest fraud ever perpetrated in the history of the state.

It even far exceeds the apparent fraud of the bank bailout wherein we the people are paying off UK and German banks, who held high risk bonds in bad banks, by using loans from the very same UK and German banks to pay their bonds, and we are charged interest for the privilege of bailing out their gambling debts to boot. Does this seem right to anyone except our politicians? Nobody of sound mind could fail to see the deliberate fraud of this and the role being played by our government in assisting this.

When the government accept this IMF bailout they will be relinquishing control of the nation and handing over the financial management of the country to the IMF, which in effect is only a front for the UK and German banks that funded the bailout. It is therefore they who will decide that Irelands assets are sold off and to who. Watch this space and we will find with very little investigation that subsidiary companies of the banks may well benefit greatly from this fire sale.

Already Bertie Ahern in his cushy new job as head of the International Forestry Fund, a corporation set up by a Swiss financial services provider Helvetia Wealth AG, is bidding to buy and privatise Coalite, which controls all Irelands forestry. This would mean 7% of Ireland’s land mass would be in the hands of one of these international banks. It was a recommendation of the An Bord Snip Nua report in 2009 and the appointment of Ahern in 2010 tells me that this was probably already a done deal before the bailout ever reared it’s head.

The level of collusion to pull off this takeover of assets has to go to the highest levels of government in order to orchestrate this over such a long period of time, because not only was the oil and gas legislation nullified but so was the banking control legislation in the same period.

Indeed if we look to those people who have been in positions of power and also regularly attended secret meetings like the annual Bilderberg meeting or the Tri-lateral Commission meeting along with all of these bankers, oil companies, other multinationals and politicians in Europe and worldwide, then we may be seeing the root of the conflict of interests of our own politicians and should ask who are they really working for?

If these meetings aren’t shady enough it is made more suspicious by the fact that the Tri-lateral Commission meeting this year was held over three days in Dublin this Spring, without ever getting a mention on the national news despite 300 of the world’s richest and most powerful people being in Dublin and being dined by the President.

If we want to know why we are being asset stripped, then this is a good place to start to find your culprits, and perhaps these are he questions that people should be asking the election canvassers this week instead of who is going to fill the potholes?