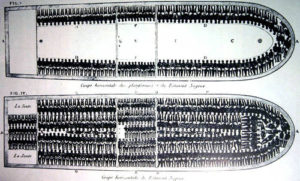 As we mourn the deaths of nearly 200 people in yesterday’s garment factory collapse outside of Dhaka, Bangladesh, we publish this article about the very issue of garment labor exploitation on the other side of the world. Economist Paul Collier’s 2009 report “Haiti: From Natural Catastrophe to Economic Security” recommends for Haiti the same model that in Bangladesh has resulted in a race towards lower pay, disastrous working conditions, and the deaths of more than 800 garment workers since 2006. This article is the begining of a four-part series to explore the implications of sweatshop labor as a model for development for Haiti.

“Haiti offers a marvelous opportunity for American investment. The run-of-the-mill Haitian is handy, easily directed, and gives a hard day’s labor for 20 cents, while in Panama the same day’s work costs $3,” wrote Financial America in 1926.[i] That may be the most honest portrayal of the offshore industry in Haiti to date. Today, the US, the UN, multilateral lending institutions, corporate investors, and others are more creative in their characterizations. They spin Haiti’s high-profit labor as being in the interest of the laborer, and as a major vehicle for what they call “development.”

A 2011 study done by the Solidarity Center of the AFL-CIO put the living wage (what would be required for workers to cover basic expenses) at US$29 a day, at least, in Port-au-Prince, while a 2008 Worker’s Rights Consortium report placed it at US$12.50 a day in the border town of Ouanaminthe, home to a large free-trade zone. Even a study commissioned by a World Bank-sponsored pro-garment assembly group, Nathan Associates Inc., acknowledged that for factory workers, “the costs of transportation to and from work and food purchased away from home eat up a substantial share of that minimum wage.” For the typical worker, who is a single mother with three to four children, this leaves less than nothing with which to keep her family healthy, fed, housed, and schooled.[ii]

“They’re always struggling to see how they’re going to make ends meet. When they get paid each payday, they already owe all of it. Their problems weigh them down so heavy they don’t know what to do,” said Ghislene Deloné. Now a health care assistant in a clinic frequented by many factory workers, Ghislene sewed in a plant herself for 11 years until, she said, she just gave out. Like many other workers we have met, she did not want her real name used or her photo published for fear of retribution from management.

In dozens of interviews we have conducted over 25 years, workers have consistently stated the same outcome of trying to support an entire family on this wage: they grow poorer over the course of their employment. For the opportunity to keep stitching at the plant, survival can involve desperation credit from the neighborhood loan shark at interest rates as high as 25% per month.

Why would anyone take such a job? People in urgent need of cash rarely have the luxury of performing cost-benefit analyses. In interviews, women said they worked in factories simply because they needed jobs. In a country with about 40% unemployment, any amount of money on payday might stave off starvation, even though the worker loses over the long term.

In 2009, thousands of workers joined students and others in the streets to demand an increase in the minimum wage from 70 gourdes (US$1.67) a day. During the “200 gourdes movement,” protests paralyzed Port-au-Prince’s industrial sector for more than a week. According to one organizer, Nixon Boumba of the Democratic Popular Movement, factory bosses cracked down, forbidding phone usage and changing workers’ shifts to keep them away from fellow organizers and demonstrations. Those they couldn’t stop, they laid off. Police lent management a hand, arresting dozens of protestors, including a dean at the State University.

Parliament responded to the popular pressure and passed an across-the-board wage raise for workers in all sectors, to 200 gourdes (US$4.76) per day. However, when Haitian factory owners complained to then-president, René Préval, he vetoed the law. According to US Embassy cables later released by WikiLeaks, Washington became actively involved in keeping wages low at export assembly factories. USAID funded studies to show that the demanded increase in minimum wage would “make the sector economically unviable and consequently force factories to shut down.” Subcontractors for Fruit of the Loom, Hanes, and Levi’s held numerous meetings with Préval and members of Parliament, using the USAID studies to argue for a lower wage. Parliament gave in and worked out a compromise with Préval, creating a special wage category for export assembly workers which would increase periodically, beginning at 125 gourdes ($3.13 in the exchange rate of the time) a day.

Subsequent wage jumps that the law demanded never transpired. Last October, the wage finally increased to 300 gourdes across all sectors except for factories, where it went up to 200 gourdes. Although factory workers are meant to have the opportunity to receive 300 gourdes, to earn that extra money they must meet production quotas (number of bra cups or pajama legs produced) that are set so high that they sometimes have to put in extra hours—what should be paid as overtime—and forgo their forty-five minutes of daily break to try to meet them. Minimum wage laws are so habitually violated that even with extra hours, a worker is likely to end her or his week below 300 gourdes.

Women in the assembly plants report that they are often coerced into sleeping with supervisors, once or many times, in order to get or keep their jobs. Health and safety protections in the workplace rarely exist, and those that do are habitually violated, with repetitive motion injuries and failing eyesight only two of the more common occupational hazards. Workers have no job security and paltry opportunities for pay raises or professional advancement.

Though the right to association is protected in the constitution, company management habitually prohibits attempts to organize. Continuing a long tradition, in recent months union members have been fired or harassed in at least three factories, according to the Haitian labor rights organization Workers’ Struggle. In one example in February of this year, according to Workers’ Struggle, a union organizer in Gildan Activewear T-shirt factory was beaten “in the name of the factory’s management” after organizing a protest to draw attention to minimum wage violations. He was subsequently fired.

The April 2013 report of Better Work Haiti, a joint program of the International Labor Organization (ILO) and the International Finance Cooperation (IFC) which monitors and enforces factories’ compliance with national and international standards, found that all 24 of the factories it monitors are “non-compliant” in various sectors. All violate occupational safety and health standards. All violate minimum wage laws, and 11 violate overtime standards. None provide adequate health and first aid services, and 22 violate worker protection standards.

In telling how they survive on factory jobs, workers use a standard refrain: sou fòs kouray, on the strength of my courage.

Whether in a whispered conversation under a pseudonym or through unabashed declarations by organizations like Workers’ Struggle and Workers’ Antenna, laborers and their advocates all state basically the same conditions needed for fair employment. They include:
* a living wage;
* overtime and severance pay;
* the right to organize;
* protection from sexual aggression by supervisors;
* physically safe working conditions;
* coverage of medical costs in the event of work-related injury or illness;
* at least one break a day, plus the time necessary to eat lunch and go to the bathroom;
* provision of drinking water and decent bathrooms; and
* protection from arbitrary or retaliatory firing.

Factory worker Esther Pierre says, “We have basic needs to meet, so we can’t sit at home doing nothing. As far as I’m concerned, though, this minimum wage hike could be a fantasy – my wages haven’t gone up. Everyone wants good work and good working conditions, but most of all, we need to receive liveable salaries so that our lives can improve.”

[i] Paul Farmer, Aids and Accusation: Haiti and the Geography of Blame (Berkeley and Los Angeles: University of California Press, 1992).

[ii] Women make up 64 percent of the garment industry. UNIFEM says that nearly 45 percent of Haitian households are headed by women, while the UN Shelter Cluster uses an estimate of 60 percent. World Bank figures put the average number of children at 3.42.

Beverly Bell has worked for more than three decades as an advocate, organizer, and writer in collaboration with social movements in Latin America, the Caribbean, Africa, and the U.S. She currently serves as associate fellow at the Institute for Policy Studies and coordinator of Other Worlds, where this article first appeared. She is author of ‘Walking on Fire: Haitian Women Stories of Survival and Resistance’ and of the forthcoming Fault Lines: Views across Haiti’s Divide.

Alexis Erkert is the coordinator for Other Worlds program ‘Another Haiti is Possible.’ She resides in Haiti and has worked in advocacy and with Haitian social movements since 2008.