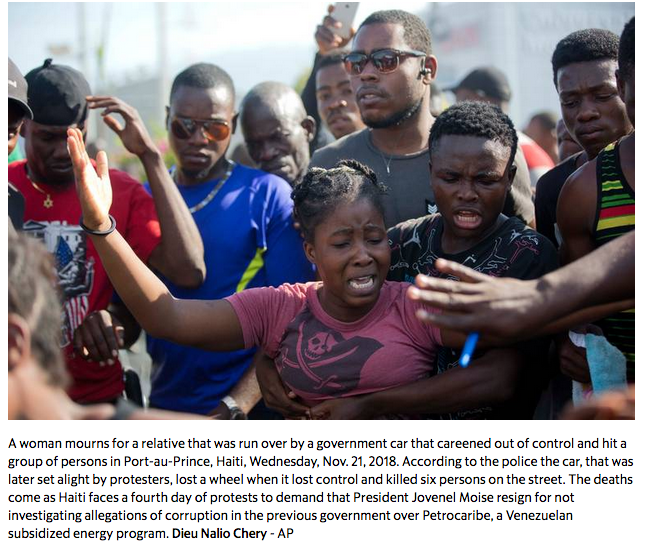 A Haitian government car went out of control into a group of people on Wednesday, killing at least six and further inflaming unrest in a capital wracked by violent protests.

Police spokesman Michel-Ange Louis-Jeune told The Associated Press that one of the car’s wheels had come off. Protesters later set fire to the car, which remained on the scene in the capital of Port-au-Prince.

Louis-Jeune said he didn’t know how many people died, but an AP journalist on the scene counted the bodies of four men and two women on the ground.

The deaths came as Haiti faced a fourth day of protests to demand that President Jovenel Moise resign for not investigating allegations of corruption in the previous government over Petrocaribe, a Venezuelan subsidized energy program.

Moise said in a brief televised address on Wednesday night that people have the right to protest but that he is not stepping down.

“The Haitian people have elected me as president in free and fair elections,” he said, adding that his opponents need to wait for the next election if they want to seize power.

Moise did not address the allegations of corruption but said he was keeping all victims in his thoughts, especially the police officers who were killed. He also made an appeal for dialogue and said the government will take all necessary measures to ensure people’s safety and restore peace to Haiti.

At least 10 people have died in the protests, not including those hit by the car. The two most recent deaths were reported Wednesday. Police spokesman Frantz Lerebours told the AP that authorities discovered the body of a young man while clearing street barricades in the southern department of Nippes. In addition, a police officer was fatally shot in the southern coastal town of Grand Goave, the second one killed in recent days.

Schools and government offices remained closed Wednesday, as did many banks and grocery stores. However, hundreds of people stood outside one bank that opened in the neighborhood of Petionville, and public buses were running again.

Government trucks also cleared many streets blocked by barricades of tires, although some remained burning in parts of the capital.

The Government has lost control of the PNH – police force as it’s chief, Michel-Angee Gedeon refuses to obey the President or carry out his sworn duties.

He should be fired.

Gedeon is an Aristide/Lavalas fanatic who meets with Aristide on a regular basis.

Lavalas is in open warfare with the Democratically elected government of Jovenel Moise.

And, this terrible accident was made much worse by the oil poured on this piece of road by Senator Beauplan’s terrorists. What would have been a reasonably controlled situation, was turned into a major disaster. 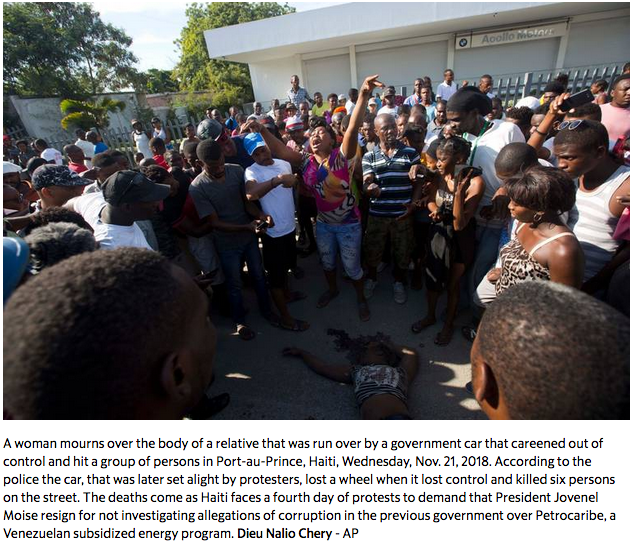