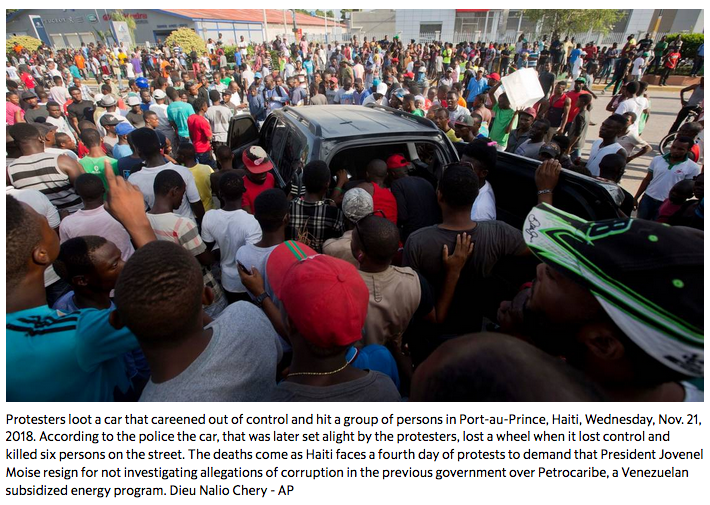 Haiti President Jovenel Moïse, who had remained silent as calls for his resignation paralyzed the country with violence and protests in recent days, finally addressed the nation Wednesday, reminding Haitians that he is the elected president and anyone wanting the job will have to wait.

“During my five-year presidency, no one, and I mean no one under any pretext can threaten the country’s interest. It puts the nation in danger,” Moïse said in a pre-recorded address with his prime minister and ministers of justice and interior standing to his right and the country’s police chief on his left. “Democracy demands sacrifice. Democracy demands that the rules of the game be respected just as the constitution requires.”

Moïse’s speech came at the end of a day in which opponents continued to reject any suggestion of sharing power with his 21-month-old administration. Some were also roiled by reports that Moïse was prepared to cede many of his responsibilities to recently appointed Prime Minister Jean Henry Céant in an effort to calm tensions, but then was convinced by advisers to abort the idea. 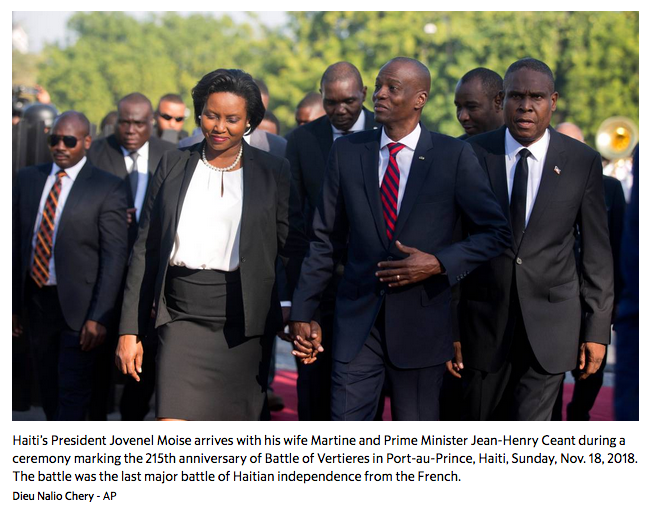 Earlier in the day, police and government workers removed fiery barricades blocking some streets. But tensions once more became inflamed after a government vehicle traveling on the airport road killed six people after it lost control and slammed into a group of people. Angered, some people on the scene responded by setting the vehicle ablaze.

Despite timid efforts by the country to resume normal activities since protests began on Sunday, Wednesday marked the fourth day in which most businesses and schools were closed.

Following Sunday’s protests, opposition groups called for a general countrywide strike to demand Moïse’s resignation and an investigation into alleged corruption in the Venezuelan subsidized energy program known as PetroCaribe. Two Senate Commission reports have accused more than a dozen former government officials and heads of private firms of embezzling $2 billion in Venezuelan oil loans — money that could have helped the country rebuild after its devastating earthquake in 2010. A company owned by Moïse is also cited.

Moïse did not mention the PetroCaribe allegations in his speech of five minutes and 50 seconds. He instead tried to project the image of a commander-in-chief in charge, while lecturing opponents about the merits of democracy and need for dialogue. His message, however did not sway those calling for his departure from office on the grounds that he has failed to improve conditions in Haiti and refuses to address the corruption allegations. They announced plans for another protest on Friday.

“We are not interested in negotiating,” said Andre Michel, an attorney and one of the president’s most vocal opponents. “Today, the only option that exists for democracy is to continue to pursue mobilization for Jovenel Moïse to resign so that we can hold a national conference, and all sectors can sit and construct another state, another country in the interests of all Haitians.”

“A president has to show that he had heard the people,” Michel added. “The president has not heard the message of the population, which is one, to resign and the other, to begin the process of the Petrocaribe investigation.”

Jerry Tardieu, a member of the Lower Chamber of Deputies, said he too was not impressed with the president’s speech, given the rising political and social tensions in Haiti.

“Once again the president has missed a unique opportunity to deliver a speech that would ease the fears and anguish of the Haitian people and lay a clear plan to end the current crisis” said Tardieu, who is asking for the president to step down for the good of the country.

Reminiscent of Moïse’s recent speeches, Wednesday’s address carried a combative rather than conciliatory tone. As president, Moïse did not offer any concrete plans for addressing the sense of deepening despair engulfing the country as the domestic currency continues to depreciate while the budget deficit grows, or allegations that he is undermining his own police force and its ability to provide security.

Faced with accusations that the Haiti National Police had created a new specialized unit carrying M60 machine guns, Police Chief Michel-Ange Gédéon took to the radio on Tuesday to say no such unit had been created and he was as surprised as anyone to see police officers assigned to the presidential palace parading around during  Sunday’s protests in new uniforms and souped-up camouflage vehicles with one-way bullet-proof windows. and heavy weaponry.

Calling once more for dialogue, Moïse put the burden of resolving the current crisis on the shoulders of Céant, the prime minister, and his cabinet.

“The government has to take every effort to create the conditions for peace to be established in the four corners of the country,” Moïse said. “The government should take all responsibility to continue with the social appeasement projects in disadvantaged neighborhoods to improve people’s conditions.” 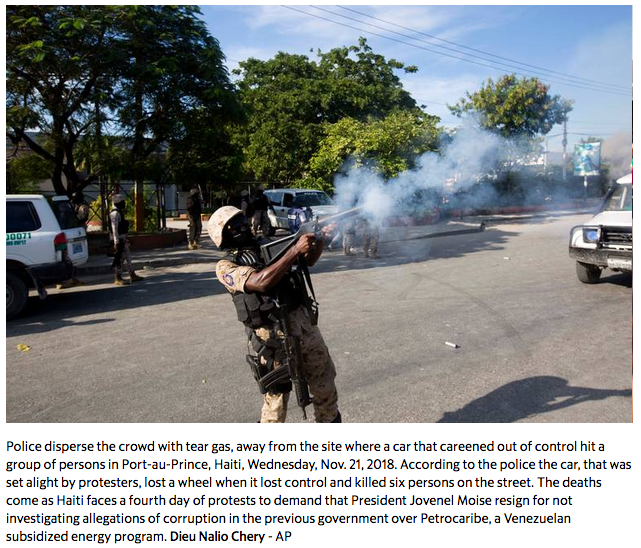