A new CDC report begins to quantify the devastating effects the virus has on children. 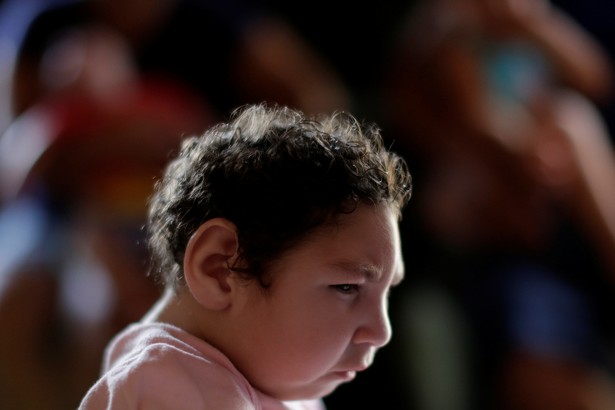 Heloisa, who has a twin sister named Heloa, both 10 months old and both born with microcephaly, is pictured at her house in Areia, Paraiba state, Brazil on February 8, 2017. Ueslei Marcelino / Reuters

Microcephaly is typically a very rare condition, causing about seven babies per 10,000 births to be born with undersized heads. This can lead to vision and hearing problems, seizures, and other developmental issues. But microcephaly was thrust into the spotlight by the Zika epidemic, as one of the birth defects that can happen if a pregnant woman is infected with the mosquito-borne virus. Zika increases the chances that a fetus will develop microcephaly and/or other birth defects, particularly if the mother is infected during the first trimester.

New numbers from the Centers for Disease Control and Prevention help quantify that risk: Researchers found that the rate of birth defects in children born to Zika-infected mothers is 20 times higher than normal. The birth defects they looked at included microcephaly as well as eye abnormalities, neural tube defects, and other unspecified central nervous system dysfunctions.

The CDC first looked at the prevalence of these birth defects in populations unaffected by Zika—in Massachusetts and North Carolina in 2013, and in three counties in Atlanta, Georgia, in 2013 and 2014. These regions were chosen because they were running good population-based birth-defect surveillance programs. The prevalence of any of the birth defects in question was 2.86 per 1,000 live births. (Microcephaly specifically was 1.5 per 1,000 live births.)

They then compared these numbers to data from the U.S. Zika Pregnancy Registry from January to September 2016. (It’s important to note that that registry does not include Puerto Rico, where the epidemic has hit incredibly hard. Puerto Rico has its own Zika pregnancy surveillance system.) During that time period, there were 442 babies born to mothers who’d been infected with Zika. Twenty-six of those children had birth defects, making the prevalence 58.8 per 1,000 births.

One of the things that’s been hardest to determine about Zika (and one of the things people most want to know) is, if a pregnant woman gets infected, what are the chances her baby will develop a birth defect? A previous study based on data from Brazil put the chances at between 1 and a 13 percent, for microcephaly specifically. That’s a wide range, and the U.S. data falls within it—4 percent of infants born to Zika-affected mothers had microcephaly. When you include all the birth defects, that number rises to 6 percent.

But there have been more Zika babies born since September, and the number of affected children in the United States continues to rise. As of February 21, there have been 1,143 babies born to mothers who were infected with Zika, and 47 of them (4 percent) have had birth defects. There were also five pregnancies where the fetus had birth defects, but the pregnancy was lost. A study published in JAMA Pediatrics in October 2016 estimated that 10,000 pregnant women could be infected with Zika in Puerto Rico, leading to up to 270 babies born with microcephaly from 2016 to 2017.

This is far from the final count. Zika hasn’t gone away, and what’s more, children can develop microcephaly as they age, even if they didn’t show signs of it at birth. But what’s clear is that the generation being born right now in the U.S. will have incredibly, abnormally high rates of microcephaly. Like the fabled butterfly effect, the effects of a simple mosquito bite will reverberate throughout these children’s lives.