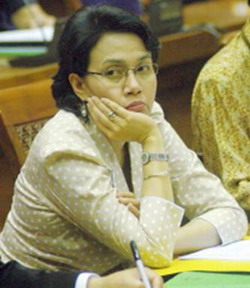 The FINANCIAL — The new World Bank Group Managing Director Sri Mulyani Indrawati and Vice President for Latin America and the Caribbean Pamela Cox will visit Haiti next week to review progress made in the country after the earthquake, and meet with Prime Minister Jean-Max Bellerive and other high-level officials.

“This will be Ms. Indrawati’s first visit to Haiti where she will bring her expertise in post-disaster reconstruction, after playing a key role in rebuilding Aceh (Indonesia) in the aftermath of the December 2004 tsunami. Before joining the Bank on July 1st, Ms. Indrawati was Indonesia’s Minister of Finance since 2005. She also held the position of State Minister and Chair of the Indonesian National Development Planning Agency,” World Bank said.
“The World Bank Group is committed to Haiti and its people,” said Indrawati. “We are working with the Government of Haiti and the international community to speed up reconstruction efforts and ensure that projects have tangible results that truly benefit the poor.”

To help Haiti recover from the January 12 earthquake, the World Bank Group has pledged US$479 million through June 2011. Of this amount, more than half has already been made available:

US$91 million in new resources from the International Development Agency (IDA) and trust funds have been approved to support reconstruction and development projects;

US$68 million from IDA have been spent in support of social and emergency reconstruction needs since January 2010;

US$39 million, Haiti’s full debt to the World Bank , have been cancelled; and

US$49 million have been made available by the Bank Group’s private sector arm, the International Finance Corporation (IFC), to support Haiti’s private sector, which has also disbursed US$7.6 million since the earthquake.

All World Bank funding has been in grant form since mid-2005.

“The Bank’s initial response following the earthquake focused on improving the lives of those affected while contributing to build the foundations for long-term recovery,” said Pamela Cox. “The US$240 million made available to Haiti to date have helped assess the impact of the tragedy, prepare and implement emergency infrastructure, education and community based projects to assist the people of Haiti and provide emergency funding to the private sector.”

Some of the results achieved with World Bank Group support include:

Offices were acquired and equipped for the Ministry of Economy and Finance and Tax Office (over 500 staff), enabling the Ministry to function and revenues to be collected.

More than 200,000 buildings have been assessed for structural damage.

Around 90,000 cubic meters of trash and debris were removed from key drainage canals in Port-au-Prince, reducing flood risk for temporary camps in the capital.

A transfer of US$3 million to the World Food Program has helped provide supplementary food to 200,000 children aged 6-23 months, while US$1 million to the Pan-American Health Organization has supported basic health care services to pregnant and lactating women and children from 0-24 months.

Six water supply systems were completed, benefiting 37,000 people in rural communities in the South, which are struggling to absorb the exodus from the capital.

IFC completed the structuring of the international bidding process for TELECO, which is bringing the country’s largest foreign direct investment since the earthquake—a US$100 million investment by Vietnam’s biggest mobile telephone operator, Viettel, to expand telecommunications services in Haiti.

At the request of the Government of Haiti, the World Bank established the Haiti Reconstruction Fund (HRF) in March 2010, in partnership with the Inter-American Development Bank and the United Nations.

Donors pledged about US$500 million to the HRF in March. To date, five donors have confirmed their pledges for a total of US$97.5 million, of which US$67 million have been received.

The HRF is one of several sources of post-earthquake reconstruction financing. The bulk of the resources pledged to Haiti at the March 31 donor conference (US$5.5 billion) will likely flow through bilateral donors and NGOs, and not through the HRF.

The first Government request for HRF financing was made on June 17th and, that same day, the HRF’s Steering Committee allocated US$30 million for the provision of critical services to the Haitian people, to be channeled through the World Bank .

The Government, through the Interim Haiti Reconstruction Commission, sets the HRF’s priorities and approves all requests for HRF financing, while the Haitian Minister of Finance Ronald Baudin chairs the HRF’s Steering Committee.