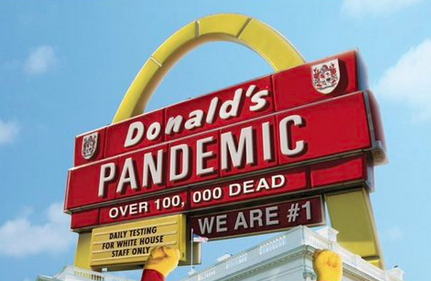 In the hours before President Trump’s rally in Tulsa, his campaign directed the removal of thousands of “Do Not Sit Here, Please!” stickers from seats in the arena that were intended to establish social distance between rallygoers, according to video and photos obtained by The Washington Post and a person familiar with the event.

The removal contradicted instructions from the management of the BOK Center, the 19,000-seat arena in downtown Tulsa where Trump held his rally on June 20. At the time, coronavirus cases were rising sharply in Tulsa County, and Trump faced intense criticism for convening a large crowd for an indoor political rally, his first such event since the start of the pandemic.

As part of its safety plan, arena management had purchased 12,000 do-not-sit stickers for Trump’s rally, intended to keep people apart by leaving open seats between attendees. On the day of the rally, event staff had already affixed them on nearly every other seat in the arena when Trump’s campaign told event management to stop and then began removing the stickers, hours before the president’s arrival, according to a person familiar with the event who spoke on the condition of anonymity to discuss internal matters.

In a video clip obtained by The Washington Post, two men — one in a suit and one wearing a badge and a face mask — can be seen pulling stickers off seats in a section of the arena. It is unclear who those two men are. When Trump took the stage on Saturday evening, the crowd was clustered together and attendees were not leaving empty seats between themselves.

The actions by Trump’s campaign were first reported Friday by Billboard Magazine.

As rally preparations were underway, Trump’s campaign staff intervened with the venue manager, ASM Global, and told them to stop labeling seats in this way, Doug Thornton, executive vice president of ASM Global, told the magazine.

“They also told us that they didn’t want any signs posted saying we should social distance in the venue,” Thornton said. “The campaign went through and removed the stickers.”

Trump campaign spokesman Tim Murtaugh did not directly respond to questions about the sticker removal.

“The rally was in full compliance with local requirements. In addition, every rally attendee received a temperature check prior to admission, was given a face mask, and provided ample access to hand sanitizer,” Murtaugh said in an emailed statement.

In a separate statement, the campaign said: “There were signs posted and we are not aware of any campaign staff asking that they be removed.”

Trump held his Tulsa rally despite opposition by Oklahoma health authorities and residents who feared that convening a large crowd indoors could accelerate the spread of the coronavirus. The number of coronavirus cases in Tulsa County was spiking in the days leading up to the rally and has continued to increase since.

The director of the Tulsa Health Department, Bruce Dart, had recommended that the event be postponed until it was safer. A number of city residents and business owners brought a lawsuit against the venue manager, ASM Global, seeking to require all attendees wear masks and adhere to social distancing guidelines from health authorities.

On June 13, a week before the rally, Oklahoma Gov. Kevin Stitt (R) wrote to the venue management saying he understood that Trump’s campaign “has presented plans to ASM Global in order to accommodate capacity crowds during a political rally.”

Stitt noted that Oklahoma was in “Phase 3” of its reopening plan and Trump’s rally “proceeding as planned is consistent with the guidance” of that plan. Stitt’s letter added that “we have also encouraged event licensees to refer to the general CDC guidelines for more information about COVID-19.”

Two days before the rally, the managers of the BOK Center had asked the Trump campaign to provide a detailed written plan outlining the “health and safety” measures it intended to use to prevent the spread of coronavirus.

Before the rally, Murtaugh said in an emailed statement: “We take safety seriously, which is why we’re doing temperature checks for everyone attending, and providing masks and hand sanitizer. This will be a Trump rally, which means a big, boisterous, excited crowd. We don’t recall the media shaming demonstrators about social distancing — in fact the media were cheering them on.”

As the crowd entered the day of the rally, the Trump campaign handed out masks and small bottles of “Make America Great Again 2020” branded hand sanitizer.

The BOK Center also put down floor decals in front of concession areas and put up plexiglass to protect vendors.

At 1:47 p.m. that day, Fox 23 News posted on its Facebook page a photo from inside the BOK Center showing two members of the event staff putting stickers on seats. “Stickers are going on every other seat in the BOK Center saying ‘Do Not Sit Here’ to try to spread the crowd out for President Trump’s rally tonight,” the post read.

After the majority of the stickers were in place, a member of Trump’s campaign radioed staff in the event war room where arena management was monitoring preparations and told them to stop, according to the person familiar with the event. Event staffers were told to continue applying the stickers. Later, the campaign began pulling them off, the person said.

In video footage of Trump’s rally, there appeared to be no effort to keep an empty seat between attendees.

Attendance turned out to be less than Trump expected — he had said some 1 million people wanted tickets — and the arena was not full, particularly in the upper level.

Trump had wanted every seat packed, and he told advisers coming in on Air Force One and at the arena he was displeased that the crowd was not larger, said two Trump advisers, who like others spoke on the condition of anonymity to relay private conversations.

“He was quite angry,” said one person who interacted with him.

Trump had told North Carolina Gov. Roy Cooper (D) during a May 29 phone call that he would not hold a socially distanced convention in Charlotte because he had never had an empty seat since he came down the escalator at the start of his presidential campaign in 2015.

Neither Trump nor the White House asked that the stickers be removed, said a senior White House official. While campaign staff and some attendees wore masks during the rally, many rallygoers did not.

At least six members of the Trump campaign advance staff have tested positive for the coronavirus, including two Secret Service employees. Dozens of Secret Service officers and agents who attended the Tulsa rally were ordered to self-quarantine.

Since the rally, coronavirus cases in Tulsa County hit a new high of 259 new confirmed cases on June 23.