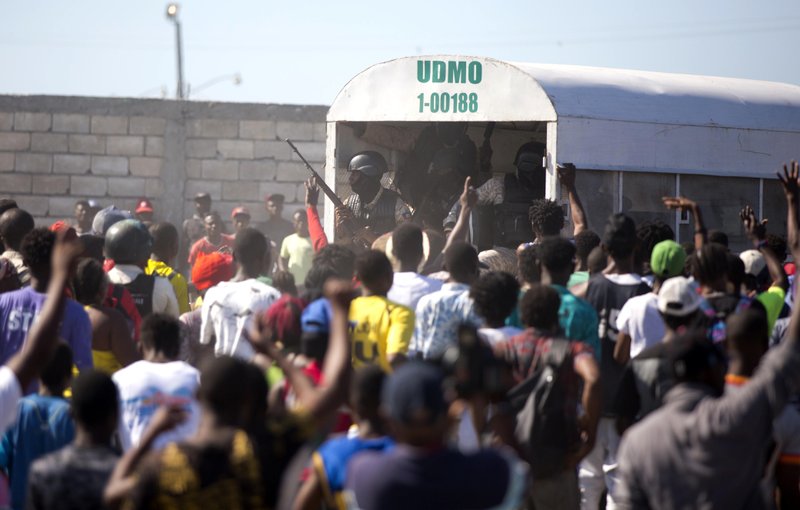 1 of 18
In this Dec. 10, 2018 photo, police guard an alleged gang member to keep the crowd from attacking him outside a police station in the La Saline slum of Port-au-Prince, Haiti. Residents believe the arrested man is one of the perpetrators of a Nov. 13 massacre that killed at least 20 people in La Saline slum. (AP Photo/Dieu Nalio Chery)

PORT-AU-PRINCE, Haiti (AP) — When a police truck carrying men in uniform pulled into an impoverished neighborhood in the Haitian capital, residents thought it was an official operation.

Maybe police were finally trying to head off a war between the gangs that run protection rackets in the market next to the sprawling collection of cinderblock shacks and low-rise public housing.

Then the men opened fire. Joined by local gang members clad in black, they went house to house with long guns and machetes, pulling unarmed people into the narrow alleys and killing them with single shots or machete blows, witnesses told The Associated Press.

“When I saw them I thought they were providing security but then I realized they were shooting at the population,” said 55-year-old resident Marie-Lourdes Corestan. “They were shooting, and I was running to save my life.” 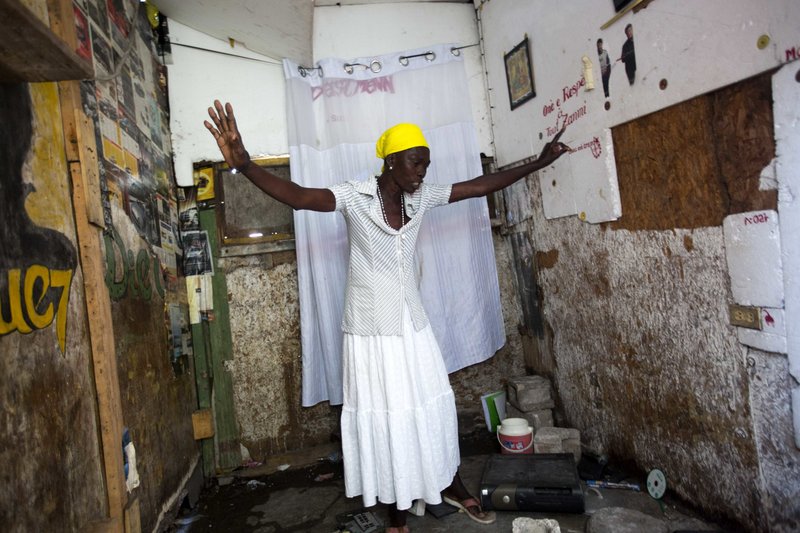 Marie-Lourdes Corestan asks herself out loud how will she survive without her son, in his room at their home. (AP Photo/Dieu Nalio Chery)

Witnesses, a human-rights group and a Catholic charity that collected bodies after the Nov. 13 massacre told The Associated Press that at least 21 men were slain over a 24-hour period in the La Saline neighborhood.

Some residents and local rights groups say the killers were gang members working with corrupt police to seize territory in the La Saline gang war. But others accuse Haitian government officials of orchestrating the massacre to head off anti-corruption protests that often start in the neighborhood, an opposition stronghold.

What’s certain is that the killings reveal a startling erosion of security in Haiti since U.N. peacekeepers ended their 13-year mandate in October 2017 because conditions on the island had supposedly improved.

Port-au-Prince residents interviewed by the AP said the number of neighborhoods in the capital considered “no-go” zones controlled by armed gangs has grown to at least half a dozen since the departure of the heavily armed U.N. Stabilization Mission in Haiti.

“These lawless zones are multiplying,” said Marie-Yolene Gilles, head of a local rights group, Fondasyon Je Klere, which put the death toll as high as 25.

“The authorities have said nothing,” Gilles said. “They haven’t even condemned this massacre.” 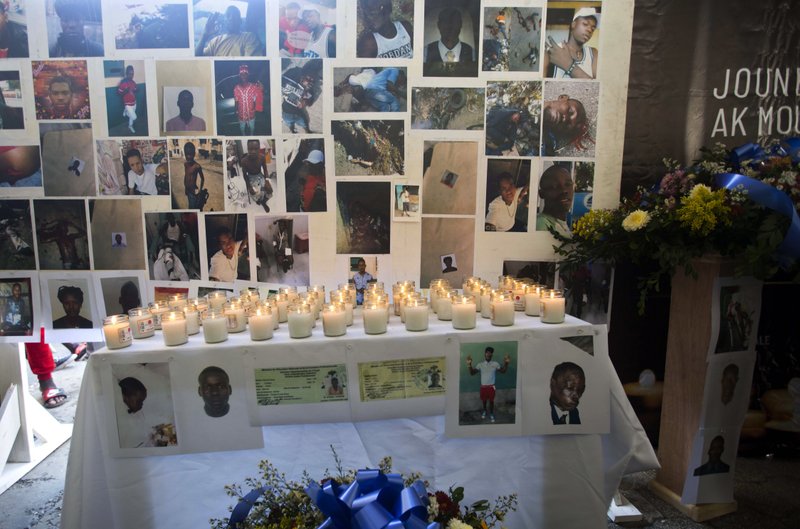 The U.N. force was sent to Haiti in 2004 after the overthrow of President Bertrand Aristide. It was replaced in 2017 by a smaller U.N. mission that has continued a police training program that has helped boost the number of Haitian officers from less than 4,000 during Aristide’s time to more than 15,000 today.

The police, however, are widely seen as corrupt, inefficient and ill-equipped to take on heavily armed gangs that often serve as enforcers of Haiti’s fragmented political forces.

U.N. officials said they expect to complete an investigation into the killings within weeks.

“There were worrying episodes of violence in some of the most notorious neighborhoods of Port-au-Prince, areas where state authority is limited,” Helen Meagher La Lime, head of the U.N. Mission for Justice Support in Haiti, which replaced the U.N. peacekeeping force, told the U.N. Security Council last month. “Investigations by both the authorities and human-rights organizations are ongoing, and our human-rights service is also working to determine what happened.” 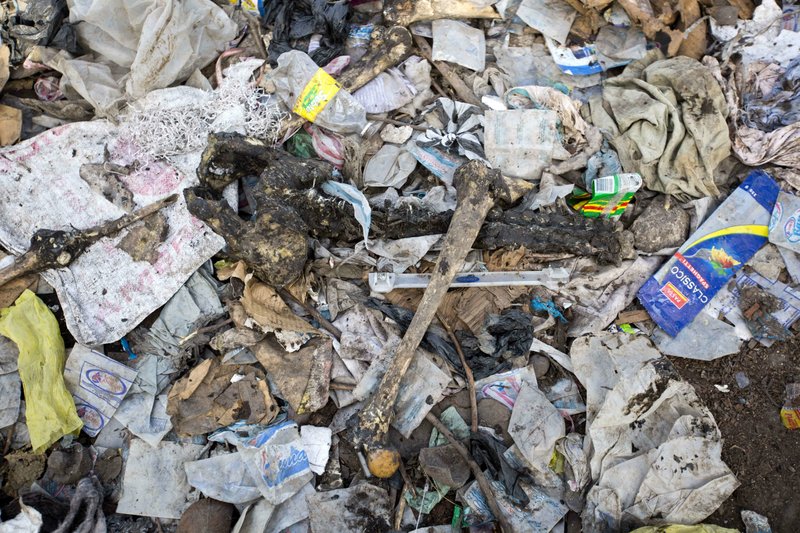 Human bones lay amid garbage at a pig farm where witnesses said the bodies were thrown to feed the animals. (AP Photo/Dieu Nalio Chery)

Thousands of people live in La Saline, many working in the neighboring market that sprawls for more than a mile and where vendors sell everything from produce trucked in from the countryside to used clothing imported from South Florida.

Residents live in cinderblock homes with sheet metal roofs, many barely big enough to hold a single mattress. They cook over open fires in alleyways so narrow that two people can’t pass without touching shoulders.

Gangs of armed young men control the neighborhood, often pulling out pistols to resolve local squabbles. The gangs’ main income comes from protection payments from market vendors and importers anxious to keep the road to a nearby port open, making control of La Saline a valuable franchise.

Armed gangs have bought or stolen untold amounts of Haitian police gear in recent years, so the degree of official involvement in the La Saline massacre remains unclear. 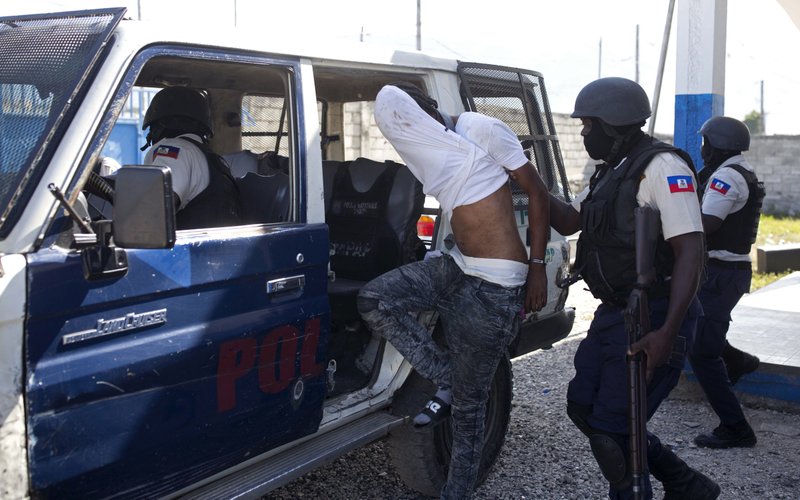 Police arrest an alleged gang member whom residents of La Saline slum identify as one of the perpetrators of the massacre. (AP Photo/Dieu Nalio Chery)

National Police chief Michel-Ange Gedeon said an investigation into the killings points to a gang fight, and he had suspended two officers accused by local civil rights groups of involvement in the massacre.

“If there are police involved with gangs, we are going to fire them,” he said. “If they are involved in human-rights violations we will turn them over to justice.”

One of the officers, Gregory Antoine, was gunned down last week in a crime blamed on rival gangsters, family members told a local radio station.

The office of President Jovenel Moise did not respond to AP requests for comment.

Joel Noel, a 28-year-old who describes himself as a community leader, said the armed men arrived in a truck marked with the insignia of a special tactical police unit trained by the U.N. and begun under former President Michel Martelly, a Moise ally.

Corestan said some wore ski masks and carried machetes when they descended on the neighborhood at 3 p.m.

She said she ran for her life when the attack began, leaving behind her 24-year-old son Edaud-Pierre, an aspiring DJ, who was unarmed and practicing mixing songs. She said neighbors told her the armed men killed him in cold blood.

There are two police stations in La Saline and the surrounding area, but witnesses said neither sent officers to intervene.

Gedeon, the police chief, said officers arrived after nightfall and surrounded the area but were unable to move in because it was dark. Police have since made one arrest in the case, he said.

Morelle Lendor, a 33-year-old street vendor, said she was hiding in her shack with a man she knew only as Wuanito when two men knocked on the door.

She recognized them as gang members from an adjoining neighborhood, wearing unmarked black uniforms, black caps and carrying long guns.

She said they grabbed Wuanito, who was unarmed, and killed him with a single shot. Three weeks later, the bloodstain remained on the wall of her shack. 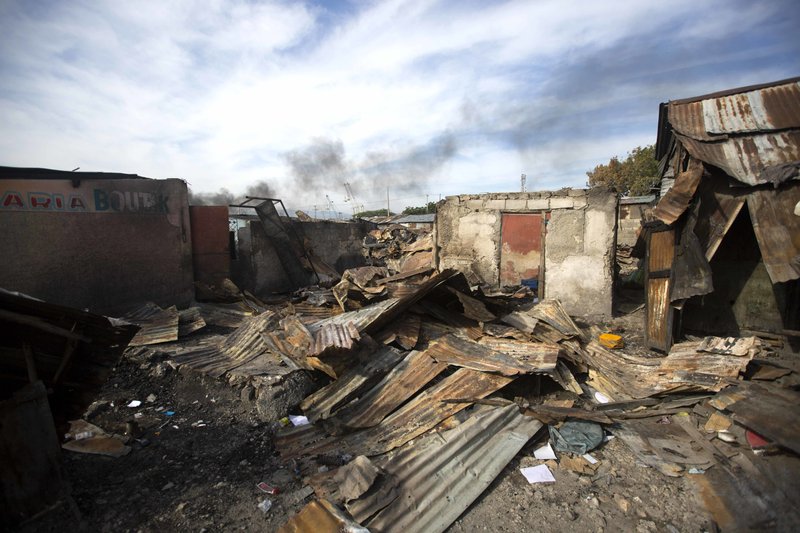 Homes that were burned to the ground during a massacre lay in ruins. (AP Photo/Dieu Nalio Chery)

“The majority of people who died were innocent people,” said Raphael Louigene, a social worker at Fondation St. Luc, a Catholic charity that works in the slums of Port-au-Prince.

He said that he and two clergy members collected 21 sets of male remains from the streets of La Saline in the days after the massacre, when neither police nor judiciary officials would enter the neighborhood. He said the victims had been shot or hacked with machetes and only eight full bodies were recovered because most had been burned or fed to pigs.

Residents said at least one woman may also have been among the victims. Belande Louis, 33, said her 28-year-old sister Sandra disappeared on Nov. 13 and neighbors said she was killed by men with machetes.

Louigene said the massacre appeared to result from a fight over the right to extort marketplace merchants after one gang pushed out another.

“The group that was kicked out came back seeking revenge,” Louigene said. “The police don’t have the means to confront the gang guys.”

For some in La Saline, the explanation is more sinister. 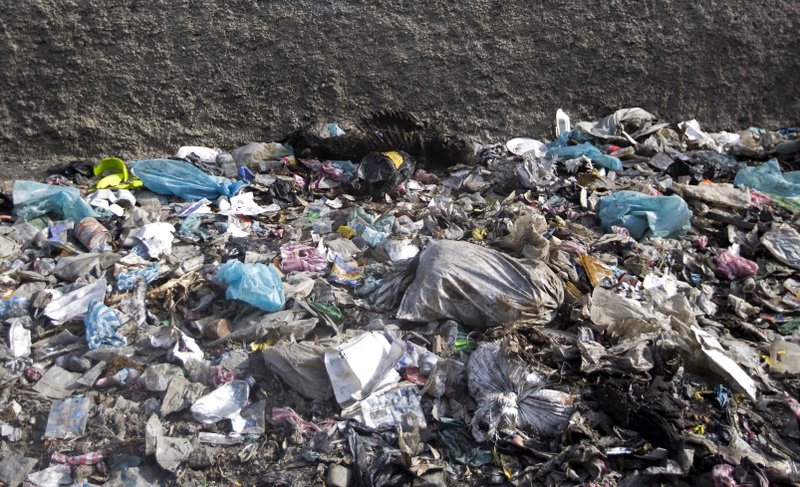 A burned body lies amid garbage at a pig farm where witnesses said some victims’ of a massacre were thrown and eaten by swine. (AP Photo/Dieu Nalio Chery)

President Moise faces widespread discontent over his failure to pursue allegations that his ally, former president Martelly, embezzled more than $2 billion in proceeds from a Venezuelan program providing the Haitian government with heavily discounted oil that it resold at a hefty profit.

La Saline is a longtime rallying point for anti-government protests and the massacre occurred four days before long-planned nationwide protests over the corruption allegations.

Some residents and local rights groups accused Haitian government officials of orchestrating the attack by a rival gang to intimidate La Saline residents and prevent protests.

“This is a political fight, said Noel, the local leader. “After they had control of the area, they went into people’s homes and took them out and executed them.” 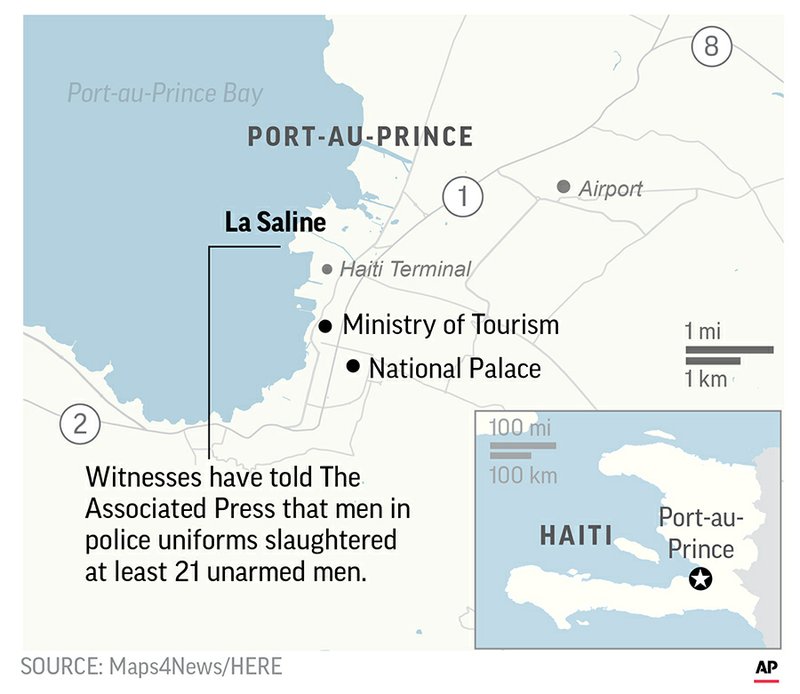