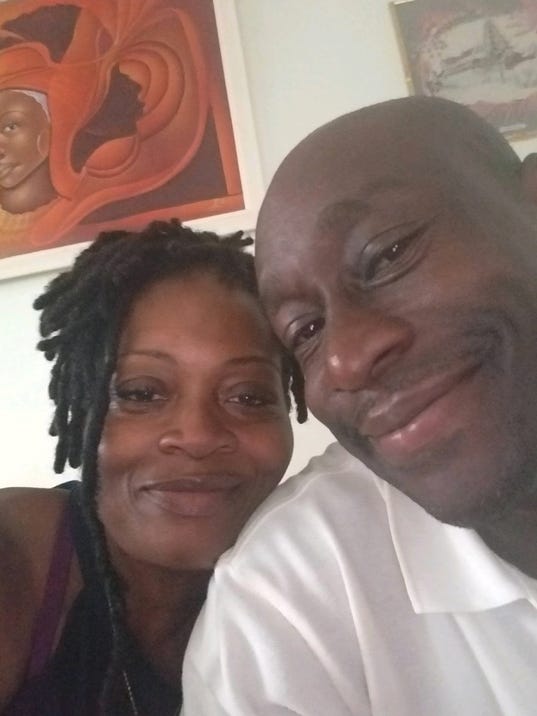 He is not okay, says his wife Lashanda.

In September, Castel was deported to Haiti, a country he had not seen since he was 8 years old. When he landed in Port Au Prince, he knew no one there and did not speak the language.

“It’s the worst type of punishment for anyone,” Lashanda Castel said.

Castel was eligible for deportation because of a 1999 criminal conviction. Until August, he had been among more than 900,000 immigrants living under final orders of deportation that had not been enforced. In the past, people with long histories of obeying the law and living quiet lives were not priorities for expulsion. Shortly after his inauguration, President Trump promised a return to the “rule of law” and ordered U.S. Immigration and Customs Enforcement to stop exempting classes or categories of removable aliens from potential enforcement.

On August 10, Castel was taken into custody and told he would be deported. Protests, rallies, letter writing campaigns and pardon requests organized by his supporters in Rochester did not change his fate. He now lives in a one-bedroom apartment in Port Au Prince. “I am trying to adjust,” he said by phone.

On Wednesday, Gov. Andrew Cuomo announced pardons for 18 New Yorkers who faced deportation or other immigration related penalties due to criminal convictions. “While the federal government continues to target immigrants and threatens to tear families apart with deportation, these actions take a critical step toward a more just, more fair and more compassionate New York,” Cuomo said in a statement.

Castel’s supporters were disappointed that his name was not included on the list, but remain hopeful that Cuomo might eventually grant him a pardon that could allow him to return to his family in Rochester. Colin Brennan, the governor’s deputy communications director for public safety, said Castel’s case remains under review. “Clemency is an ongoing process and each case has its own set of complexities that must be examined,” he said.

Cuomo’s effort to protect immigrants from deportation was praised by Alina Das, the Co-Director of the Immigrant Rights Clinic at New York University School of Law. “All New Yorkers deserve an opportunity for redemption and second chances. By granting these pardons, Governor Cuomo offers hope to immigrant New Yorkers who would otherwise face a devastating double punishment of deportation after already paying their debt to society.”

Castel spent six years in jail after pleading guilty to a felony in 1999, after a dispute with his friend Reginald McQueen turned violent. Castel said that McQueen started chasing him with a knife and he shot him in self-defense.

His public defender advised him to plead guilty to assault to avoid risking the lengthy prison sentence that could result from being found guilty at trial. At the time Castel was a permanent resident with a green card. He said he did not realize that his lack of citizenship would make him eligible for deportation.

When he was released from jail, the U.S. Department of Homeland Security picked him up and held him in a detention center for 18 months as he appealed his deportation order. Castel lost his final appeal in 2011 but U.S. Immigration and Customs Enforcement did not deport him. He was given permission to work legally and required to check in with ICE periodically. Castel built a career selling cars at Vision Hyundai, got married, stayed out of legal trouble and never missed a check-in appointment, including the one in Batavia on Aug. 10 when he learned he was to be deported.

After he was taken into custody, Castel applied for a pardon from Governor Cuomo. The application included a statement from Reginald McQueen, the man he shot. “An unfortunate incident occurred that caused me harm and got Reggie arrested. However, it was the result of a personal problem between us and we have become friends again,” McQueen wrote, adding that he did not want to see Castel deported. ”I am satisfied that he has paid his debt to society and to me and I don’t think he should be punished any more for what he did. I have my health back and my life back and I would like Reggie to have his life back, too.”

For now, Castel’s life is in Haiti. His wife has traveled there twice to take him insulin needed to treat his severe diabetes. She was there for Thanksgiving but said the family endured a very sad Christmas apart. She is planning another trip in mid-January.

Castel has tried to find work, but the language barrier makes that difficult. Poverty strangles much of Haiti, where people survive on an average of $2.25 a day. Friends have hosted fundraisers to help the family and there is an ongoing youcaring.com fundraiser page.

The worst thing, they say, is the isolation. Castel and his wife have a blended family of seven children and being separated from them has been very hard for him. “Not having human touch for a baby means that baby won’t thrive or grow,” said Lashanda Castel. “It’s the same for a man, living with a family for most of his life, now being totally alone.”

When Castel rented his apartment, he had to choose between a six-month lease and a year-long one. The monthly cost under the year-long term would have been cheaper but he chose to rent for six months, still holding on to hope that his life in Haiti will be temporary.

Erica Bryant is a columnist. Contact her at ebryant@gannett.com