This TIME article is the sort of garbage that prevents anyone from gaining a balanced perspective of what is and what isn’t, in Haiti.  It simply regurgitates past sensationalism and lies that do not have any real basis in fact. Unfortunately, the world is full of people who do not even know where Haiti is, on a map, and tend to respect publications like TIME, expecting something true and balanced.

One quote from a monograph on the Caribbean Basin Initiative, written for the University of Miami, by Ambassador Ernest Preeg, our representative in Haiti during the mid-eighties:

QUOTE: “It can honestly be said that the Jean Claude Duvalier Presidency is the longest period of violence free stability in the nation’s history…”

Preeg then went on to say that the educational system was decreasing illiteracy, the child mortality rate was going down, investment was expanding, as was tourism and  Haiti benefited from the CBI, more than other nations, in the area, because of the infrastructure put in place by Jean Claude Duvalier.

These are a few of the facts that are available to anyone willing to look.

The following article is another hatchet job written for some obscure agenda….this agenda having nothing to do with the well-being of Haiti’s 9,000,000 or the nation itself.

The reader should also note that TIME has written many articles on Mirlande Manigat that suggest she has substantial support, among the Haitian people, when she probably rates a 5%. Don’t believe the bought and paid for polls that put her at 31%!!!

A new election will show what her true situation is. 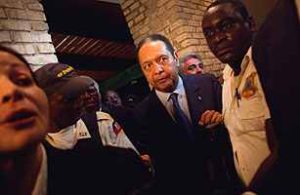 In the past 12 months, Haiti — already the western hemisphere’s economic basket case — has suffered an epic earthquake that according to latest estimates killed more than 250,000 people and leveled the country’s infrastructure, a cholera epidemic that has claimed thousands more lives and a powder-keg political crisis tied to the fraud-tainted Nov. 28 presidential election.

All the country needed now was the return of a brutal exiled dictator.

This being Haiti, whose chronic tragedy is so often served with a helping of banana-republic bizarreness, that’s what it got Sunday afternoon when Jean-Claude “Baby Doc” Duvalier landed in Port-au-Prince for the first time since being thrown out of the country and packed off to France almost 25 years ago. “I came to help my country,” the 59-year-old former despot declared as some 2,000 of his supporters met him at the airport. But it’s hard to imagine how Duvalier’s reappearance, which Haitian officials insist took them by surprise, could do anything more than throw Haiti into even deeper turmoil as it tries to rebuild after last year’s disaster.

And what’s perhaps even harder to imagine is how the government of French President Nicolas Sarkozy could have allowed Duvalier, who arrived from Paris, to board an Air France flight bound for Haiti under the current circumstances. “For the French to have even permitted [Duvalier] to leave their territory amidst an electoral and cholera crisis here shows they have not much interest in the welfare of the Haitian people,” says a high-ranking Haitian government official.

French officials, who technically had no power to stop Duvalier, weren’t responding to that question on Sunday night. But Port-au-Prince media were rife with conflicting conspiracy theories — all of them focused on last week’s election report by the Organization of American States (OAS). It concluded that Jude Célestin, the candidate of Haitian President René Préval’s party, actually finished third, not second, in the first-round balloting on Nov. 28, and that Célestin should therefore not be eligible for a runoff vote — which, ironically, was originally supposed to have been held Sunday but has been postponed.

The less-than-credible Nov. 28 results, which many if not most Haitians believe the government fixed to eke out a runoff spot for Célestin, were met by violent street protests last month. Even before last week’s OAS report, the aloof and unpopular Préval was under ample international pressure, including from the U.S., to recognize the official third-place finisher, Michel Martelly, as the actual runner-up. (He would then face first-place candidate Mirlande Manigat in the runoff.) Last week, France’s ambassador to Haiti, Didier Le Bret, was frequently on Haitian radio calling on Préval to respect the OAS recommendation. Préval in turn angrily charged France and the international community with imperialist-style strong-arming.

The question now is, Who if anyone in this standoff benefits from the sudden presence of Duvalier? Some Haitian pundits on Sunday said it might be meant to compel Préval to acquiesce to international demands to sacrifice Célestin. But it’s hard to believe, even under Sarkozy, that France and the international community would stoop so low diplomatically as to encourage Duvalier to return to Haiti for that purpose. Others suggested that Duvalier’s return instead gives Préval leverage by showing the international powers how much more turbulent things can get if they keep messing with the Haitian President. But again, could even Préval be cynical enough to open the door to one of the 20th century’s most notorious dictators for that kind of political gain? Either way, sources close to Duvalier told reporters Sunday that he’d entered Haiti on a diplomatic passport — but if so, it was unclear which country had issued it to him.

What’s worse, this drama could actually send many Haitians, albeit with blinders on, to the side of Duvalier, whose stunning return might make him seem a figure of stability and order amid their country’s nightmarish uncertainties. Baby Doc had already announced his desire to return to Haiti in 2004, after the ouster of populist President Jean-Bertrand Aristide (whose supporters may now clamor more loudly for his own return from exile in South Africa). Duvalier even said he wanted to run for President himself in the 2006 elections. But Haitian officials made it clear that if Duvalier did return, he’d face trial on charges of corruption and brutality during his 15-year dictatorship, which had succeeded the even harsher regime of his father, François “Papa Doc” Duvalier, who died in 1971.

Both Papa Doc and Baby Doc ruled through terror, relying on bloodthirsty enforcers like the Tonton Macoutes, and each stole the western hemisphere’s poorest nation blind. After Baby Doc and his infamously venal wife, Michèle Bennett, were whisked out of Haiti in February of 1986 on a U.S. Air Force plane amid a seething uprising by Haitians, they settled in the south of France and lived in one of the world’s most luxurious exiles. (They divorced in 1993; Duvalier arrived in Port-au-Prince on Sunday with his new wife, Véronique Roy, the granddaughter of a former Haitian President.)

Baby Doc apologized for his government’s “errors” in 2004. But despite the welcome he received at the Port-au-Prince airport, Haitian police officials said they were “waiting for instructions from prosecutors” as to whether they should arrest him. After stepping off his Air France flight on Sunday, Duvalier declared, “I am here to see how the situation is.” Please. He already knew how bad the situation was. And just as he and his monstrous father did when they ruled Haiti, he’s there to make it worse.

— With reporting by Jessica Desvarieux / Port-au-Prince

4 thoughts on “Who Let ‘Baby Doc’ Duvalier Back into Haiti?-Preceeded By COMMENTARY By Haitian-Truth”