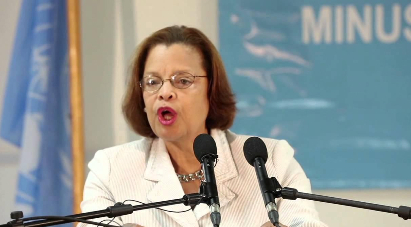 Special Representative of the Secretary General, and Head of the Mission Sandra Honore has added insult to injury by making statements to the effect that the criminally flawed election, we have just experienced, was 99.9% acceptable.

Just about anything that could go wrong, went wrong, at least once…. Sometimes dozens of times.

INTERNATIONAL COMMUNITY DOES NOT WANT HAITIANS TO VOTE!!! WILL DICTATE FRAUDULENT RESULT – AGAIN: HERE IS THE PLAN
http://www.haitian-truth.org/international-community-does-not-want-haitians-to-vote-will-dictate-fraudulent-result-%E2%80%93-again-here-is-the-plan/
Sandra Honore is a disgusting, patently dishonest piece of garbage.

Who does she represent?

We hoped she might act as a counterbalance to Martelly’s criminal efforts to fix the August 9 election through his puppet  CEP chief Opont, set upon creating a Narco State by electing a wide selection of drug-dealers, kidnappers, a few murderers, and some money launderers..

Like America’s Ambassador Pamela White, she is just another member of the Martelly team.

At least Pamela White is time-expired!

Time for Haiti to reconsider MINUSTAH’s value to Haiti.

Cheated again,  Haitians are still waiting for the free-and-fair elections originally promised in 1986.

3 thoughts on “WHAT CHANCE DO THE POOR PEOPLE OF HAITI HAVE WHEN MINUSTAH CHIEF SANDRA HONORE SAYS ELECTIONS 99.9% GOOD!!! WE PREDICTED SOMETHING LIKE THIS BUT NOT 99.9% FOR THE CRIMINAL DISASTER WE EXPERIENCED AUGUST 9.”