It was going to be a disappointing ride; two and a half hours on a bus traveling between Klagenfurt, Austria to the Alpine ski community of Kals. The bus would take me through spectacular scenery but I would not be able to appreciate it either way because both drives would be made in the dark. Such is what happens when late evening and early morning flights are booked. 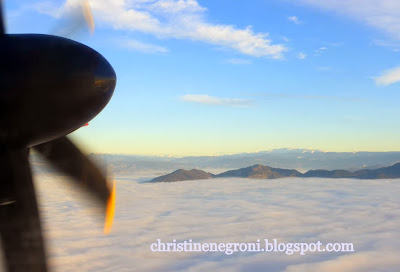 As the airport bus dropped us at the boarding stairs for Austrian Flight 934, the tarmac was wet from the mist and fog that had settled over tiny Klagenfurt Airport. Prospects for a view from the air seemed dismal too.
The Austrian Dash 8 took off into a thick grey soup. As the plane punched through the cloud layer, a brilliant sun filled the sky pouring through the windows and bathing the cabin in yellow light. To my delight, the ceiling below did not obscure the view entirely. Instead, the ocean of foamy clouds lapped midway up the mountains and the taller peaks pierced through as if reaching toward these blue skies we now shared.

I turned to airport writer Harriet Baskas and Austrian Airlines executive Peter Thier who were traveling with me, to make sure that they could also see Austrian-style timber houses perched randomly on the mountain. The people who live in these homes could look down on the clouds like a guests on cruise ship can look out on the ocean. The smiles on Harriet and Peter’s faces told me they were also enjoying this fantastic sight.
I’ve written plenty about the distractions available to air travelers; movies and television shows, wifi access, meals, snacks, sleeper seats even onboard shopping. But travelers can be entertained so much that we miss the best show of all; the one going on outside the airplane window.
Earlier in the month, I was in Haiti for the opening of JetBlue’s new route between New York and Port au Prince. While there I visited Cap Haitien, a quick 25 minute flight on Haiti’s Sunrise Airways. I flew from the international airport at Port au Prince on a British Aerospace Jetstream 32. From my seat behind the cockpit, I could watch the pilots run through their checklists. I could have pushed the throttles had the pilots needed an extra hand.
I’d been advised to sit on the left side of the plane to view the fabulous Citadel, a 19th Century fortress built by the slaves after they liberated themselves from the French colonists and declared independence in 1804. This was history I learned about while visiting the Musée du Panthéon National Haïtien the day before. The fort was insurance that if the French tried to reclaim this little slice of heaven in the Caribbean, they’d have a fight on their hands.

Luckily the fort was never needed. Now it is testimony to what the Haitians accomplished working together.
Haiti struggles each day with an international reputation as a helpless and hapless country. It suffers from the interference of an international, multi-billion dollar humanitarian assistance industry that perpetuates the idea that the people who live here are incapable of solving their own problems. (For more on this read Jonathan Katz excellent book, The Big Truck That Went By) 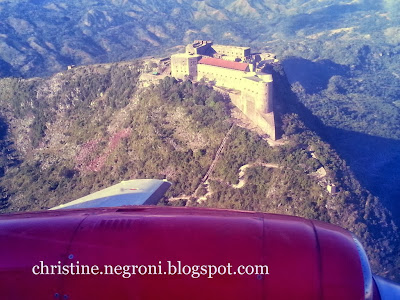 This is a monumental contrast to what history tells us about the strength and determination of the people who build this brick and limestone fortress, ringed by cannons and perched high in the sky. The power in the hands of Haiti’s founding fathers can be seen from the window of an airplane.
What does it take to summon the restorative spirit of two centuries ago so that people can make a better tomorrow for themselves? It’s a big question and I don’t pretend to have the answer, but aviation gives us an opportunity to get a mind-altering perspective.
Whether it is as the reminder of a proud past or glimpse of the villages of Austrian farmers and their self-reliant lives lived partially above the clouds, God blesses me with these snippets of the world from a heavenly perspective.

As my Austrian flight descended back into the mist, a pilot’s halo appeared around the shadow cast by our plane onto in the clouds; a circle of color telling me to open my eyes. Whether sad or the serene the majesty of our complex world is right there waiting to be appreciated.