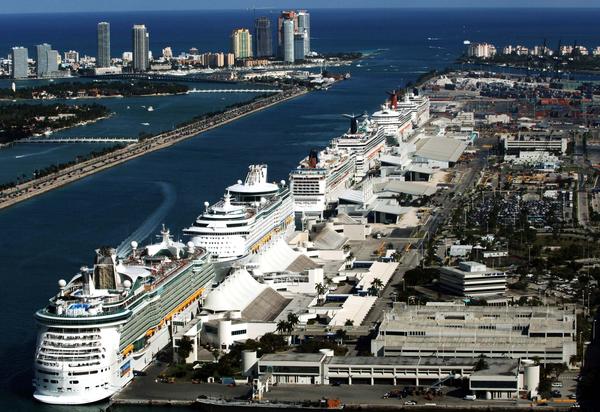 Dozens of cruise ships set sail each week in winter from Miami Beach, Fla., and many of them make stops at multiple ports in the Caribbean, where the U.S. Centers for Disease Control and Prevention warns that a mosquito-borne virus has been found for the first time in the Western Hemisphere. (Richard Sheinwald / Bloomberg News)

A mosquito-borne virus usually restricted to Africa and Asia has been detected for the first time in the Western Hemisphere, with 10 confirmed cases on the French side of the Caribbean island of St. Martin, U.S. authorities have warned.

With the winter travel season in full swing through the holidays, the U.S. Centers for Disease Control and Prevention issued a travel advisory for those headed to the tourist playgrounds.

The chikungunya virus in spread by the bite of infected mosquitoes and can cause “debilitating illness, most often characterized by fever, headache, fatigue, nausea, vomiting, muscle pain, rash and joint pain,” the CDC said on its website. Chikungunya means “that which bends up” in the Kimakonde language of Mozambique, the health agency said.

Recent outbreaks of the virus, which the CDC said is rarely fatal, have been recorded in Europe but not previously in the Americas.

“Microbes know no boundaries, and the appearance of the chikungunya virus in the Western Hemisphere represents another threat to health security,” CDC Director Tom Frieden said in a statement.

The CDC noted that the virus has the potential to spread elsewhere in the Caribbean, where cruise ships often stop at multiple ports in a single week and tourists mingle with locals at cafes and markets. Most large cruise ships dock on the Dutch side of St. Martin, but the French area’s marinas and beaches are popular with charter boats, sailing vessels and day-trippers who visit the French-side capital, Marigot, while their cruise ships are at Philipsburg.

The agency recommended that travelers to the region use insect repellant and long-sleeved shirts and pants and to use air conditioning where available and netting where not.

The island divided between French-speaking St. Martin — popular with French Canadians escaping the northern winter — and Dutch-administered St. Maarten was already fighting an outbreak of dengue fever, spread by the same Aedes aegypti mosquito that carries the chikungunya virus.