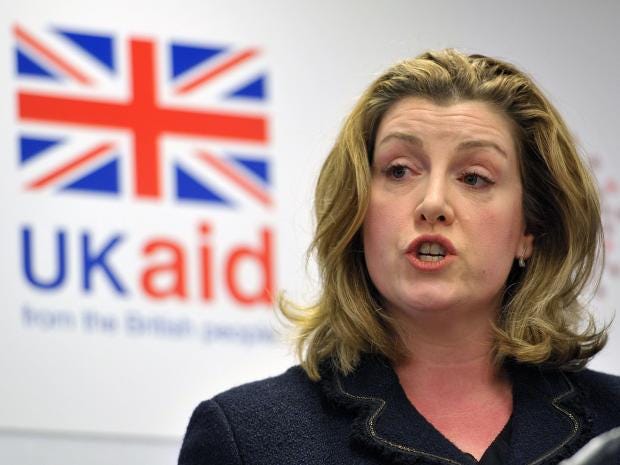 Specifically, it must increase its funding to Oxfam and other charities, which are rightly under scrutiny for employees’ bad behaviour and their own efforts to cover them up.

The Government should do so in part to trumpet its belief that organisations whose net contributions to humanity are overwhelmingly positive can never be judged by the misdeeds of a few.

The current International Development Secretary, Penny Mordaunt, threatens to withdraw Oxfam funding. Her predecessor, Priti Patel, shrilly demands it. Others will seek to adapt the scandal for makeshift use as a missile to obliterate foreign aid.

If Ukip survives the latest of its own local difficulties, which seems unlikelier than ever with Henry Bolton clinging dementedly to what passes for his leadership, it will no doubt reiterate its call for the foreign aid budget to be reduced by 80 per cent, if not scrapped entirely. More plausible voices will do the same.

The glee with which the brutalist right wing greets stories of this kind is barely less depressing than the stories themselves. In The Sunday Times, Rod Liddle concludes a column with the stark clarion call: “Never give these people any of your money.”

You can almost feel the warmth radiating from the middle-class, middle-aged snug bars of the Home Counties, where the thought of a rich country sending 0.7 per cent of its GDP to needy foreigners curdles the tonic in the G&Ts. What a relief to find their intuitive distrust of altruism confirmed.

They always knew these charities, like foreign aid itself, were gigantic rackets propagated by morally superior liberal prigs and operated by crooks. Now they’ve been proved right.

Such characters lead deliberately sheltered lives, so we probably ought not be too hard on them for being shocked – shocked! – by the exposes about Oxfam, Save the Children and the rest.

Yet beyond those all-white enclaves of the 1950s where they shiver in fear of being “swamped” by the dark skinned, it must be common knowledge that every organisation has its wrong ’uns, and that the nobility of an entity’s aims is no magical prophylactic against its infiltration by nasty individuals.

What goes for religious bodies, and care homes for the very young and old, goes for large international charities. Wherever human beings are vulnerable, through age or poverty or illness or natural disaster, predators will move in. Dreadful things will be done to the weak, and those overseeing the organisations will do what they can to hide them from view.

These are timeless facts of life, and they are as timelessly appalling as they are inevitable. It is more than a reflex to feel and express disgust whenever they come to the attention. It is a moral imperative.

So when Mordaunt describes the behaviour of Oxfam staff as “horrific”, and allegations of continuing abuse elsewhere in the aid sector as “despicable”, who could disagree?

But when she then speaks of defunding charities, you have to wonder about the sense and humanity of that when the people who would suffer worst from that are those they are in the business of helping.

Large charities are notoriously as riven by internal power struggles, egomania and misappropriation of funds as most large organisations. As with any bureaucracy, money goes missing between being received and being spent on the given cause.

But charities are also magnificent manifestations of the best of us. For all their failings, they exist to decrease the sum of human misery, and by and large they achieve that ambition.

Like the Catholic Church, they must always be held to the standards they espouse. But no one sane would argue that the excellent work the Catholic Church does in areas of extreme deprivation is any the less valuable, or should be curtailed, because of the wrongdoing of priests and subsequent attempts by the Vatican to cover them up.

A British government that sells arms to the Saudis in the knowledge that they will be used to kill, maim and displace civilians in Yemen isn’t necessarily easy to admire on the foreign policy front. One of the very few things we can take pride in is the Government’s resistance, until now, to strident demands to slash the amount of money it sends to help people abroad.

The foreign aid budget may be conceived in part as a cheap way of buying soft power, and a chunk of it fails to reach its intended destination.

But in an age when the Government blithely turns away Syrian child refugees purely to assuage the reactionary right, it shines as more than a rejection of the isolationism into which Brexit ultras would have us withdraw.

The budget is a rare and precious, practical demonstration of the values everyone affects to revere, but to which no more than lip service is too often paid.

It would be a tragedy and a source of national shame if the Government let this scandal be fashioned into the battering ram that finally broke its resistance to cutting that budget.

It should increase it by whatever is required to ensure that Oxfam and others have the funds for adequate background checks and effective policing of staff. What it cannot do, however intense the pressure from the reactionary right wing, is throw out the malnourished baby with the scummy bathwater of a few rancid individuals.