By Avi Selk and Eli Rosenberg 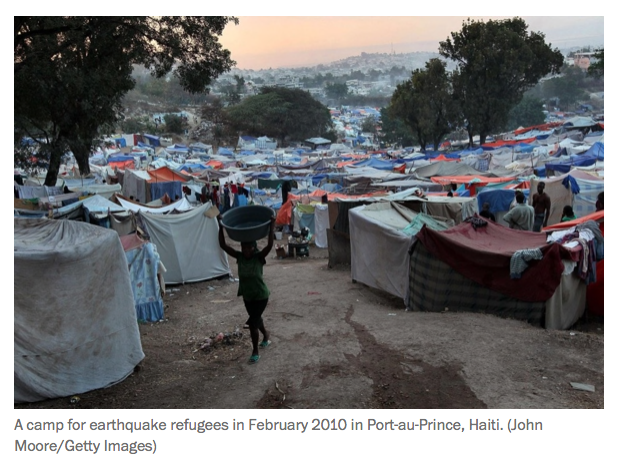 A top executive at the international charity Oxfam resigned Monday as the British government considered defunding the humanitarian group after accusations that its workers prostituted survivors of some of the worst disasters this century.

“I am ashamed that this happened on my watch and I take full responsibility,” Oxfam’s deputy chief executive, Penny Lawrence, wrote in a statement announcing her resignation. She referenced newspaper reports last week alleging that a regional Oxfam director and aid workers exploited locals for sex after two disasters — Haiti’s 2010 earthquake and a Darfuri refugee crisis in Chad several years earlier.

The resignation and Oxfam’s repeated apologies have not stemmed the crisis. Haiti’s ambassador to Britain told the Guardian newspaper that the victims “may have been underage kids,” and Oxfam’s top leaders have been accused of trying to cover up the allegations for years.

A spokesman for Prime Minister Theresa May told the Reuters news agency that Oxfam needs to do more to prevent such “horrific behavior” from repeating. Ultimately, Britain’s international development secretary told BBC News, Oxfam could end up losing its government funding — worth $44 million in the past fiscal year, which is about 8 percent of its overall income.

“If the moral leadership at the top of the organization isn’t there, then we can’t have [Oxfam] as a partner,” the secretary, Penny Mordaunt, told the BBC ahead of a meeting with charity leaders on Monday.

One of the U.K’s best-known charities, Oxfam was founded in 1942 and now runs aid programs around the world, according to Reuters.

A Times of London report published Thursday sparked the crisis. It revealed an internal investigation into Roland van Hauwermeiren, who was Oxfam’s country director in Haiti after a massive quake in 2010 killed hundreds of thousands of people and left the country in ruins.

The Times alleged that Oxfam, which had a $100 million fund to help quake survivors, subsequently tried to hide the scandal by limiting its investigation into van Hauwermeiren. He was ultimately allowed to resignin 2011 rather than being fired. Six other workers also left.

“We are ashamed of what happened,” Oxfam’s chair wrote in a statement Sunday, after the report’s publication. “We apologize unreservedly.”

The Times report led to the disclosure of additional allegations. The Guardian reported that van Hauwermeiren had also been accused of hiring sex workers in Chad in 2006 — the year that hundreds of thousands of refugees from a genocidal war in Sudan created a public health crisis in Chad.

Oxfam knew of the allegations long before it put van Hauwermeiren in charge of relief efforts in Haiti, the Times wrote.

The executive director of Oxfam International said she was “heartbroken” by an unfolding sexual misconduct scandal linked to aid workers in Haiti. (Reuters)

“It is now clear that these allegations — involving the use of prostitutes and which related to behavior of both the Country Director and members of his team in Chad — were raised before he moved to Haiti,” Lawrence, who was Oxfam’s program director at the time, wrote in her resignation statement.

“I am desperately sorry for the harm and distress that this has caused to Oxfam’s supporters, the wider development sector and most of all the vulnerable people who trusted us.”

In an earlier statement, Oxfam said it had informed its trustees, the British government and other major donors such as the European Union, the World Health Organization and other U.N. agencies of the investigation and the outcome. It said it created a whistleblower hotline and a separate team to prevent misconduct in the future.

But it’s unclear whether the crisis will end with a deputy chief’s resignation.

Meanwhile, the Guardian reported, Haiti has demanded that the organization identify all the aid workers alleged to have exploited its citizens to face prosecution “in the international system.”

Regardless of the victims’ ages, prostitution is illegal in Haiti.