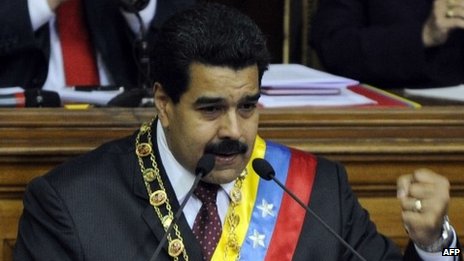 Venezuelan President Nicolas Maduro has announced a shake-up of the team running the country’s economy during his annual state of the union address.

Mr Merentes will take over the post of head of the central bank.

Speaking at the National Assembly in Caracas, Mr Maduro vowed to introducer tougher penalties against “sabotage and speculation”.

His state of the union address – the first since he was elected president in April – was broadcast on live television and radio.

“How can you describe someone who hides [from the shelves] formula milk for babies? We cannot create a new euphemism for that. That person must be described as a criminal,” said President Maduro.

He was referring to Venezuelan shortages in 2013 of several goods including milk, sugar and toilet paper.

The opposition blames the government’s anti-business policies and mismanagement of the economy for the crisis. 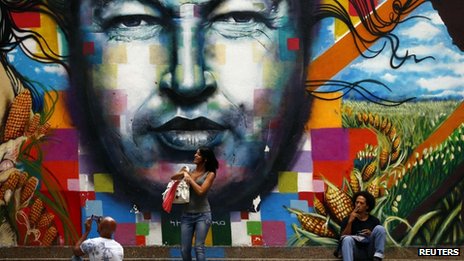 But Mr Maduro says his government is under attack from powerful right-wing sectors in the country.

“While the government makes a big effort to guarantee the quality of some services and the availability of products, the mafias speculate with other products and even medicines,” said Mr Maduro.

Although Venezuela has the world’s largest oil reserves, its people are suffering from the highest inflation in Latin America, sluggish growth and shortages.

In November, Mr Maduro was granted special powers to govern by decree for a year to deal with the economic crisis.

His plan to boost economic growth had been “very successful,” he told legislators.

He promised to give continuity to the social policies and radical economic changes that the left-wing leader introduced between 1999 and 2013.

Mr Chavez handed over power to Mr Maduro before undergoing a final cancer operation a year ago and nominated the former union leader as his preferred successor.

After his death in March 2013, Mr Maduro called a presidential election. He defeated the centre-right candidate, Henrique Capriles, by a tiny margin.

Mr Capriles accused the government of electoral fraud, but failed to have the poll annulled.