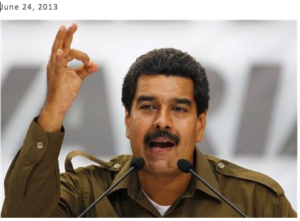 Tuesday will see Venezuelan President Nicolas Maduro  fly into Haiti for meetings with the Martelly government.

This Historic meeting is another important step in maintaining their ongoing relationship. Haiti has played an important role in Venzuelan history since the eighteen hundreds and now receives open-handed support from its friends via Petro Caraibe funding for our economy.