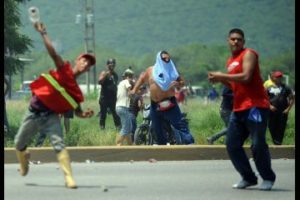 Rival supporters in the Venezuelan presidential election clashed today ahead of campaign rally by opposition candidate Henrique Capriles, who is fighting an uphill battle to unseat President Hugo Chavez in the October 7 poll.

The Associated Press reported that the two sides hurled rocks and other objects at each other in the coastal town of Puerto Cabello, traditionally pro-Chavez, injuring at least 14 people.

Chavez supporters also blocked a main road near the airport and set on fire a truck used by the Capriles’ campaign, the dispatch said.

“These acts are not spontaneous, there is someone responsible,” the state governor told a rally.

There have been sporadic bursts of violence in the run up to the October 7 poll.

Most voter surveys have shown Chavez, who is recovering from cancer, enjoys a healthy lead over his younger rival and most analysts expect him to win another six-year term, despite his failure to deliver on promises of social and economic reforms.