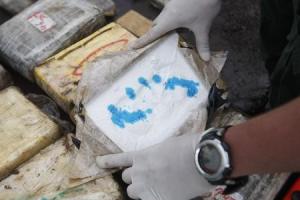 .
A Venezuelan National Guard demonstrates a test for the purity of cocaine, during a presentation of confiscated …

CARACAS (Reuters) – Hidden in a large ochre-colored container, the 1.4 tonnes of cocaine got past two dozen army checkpoints during a 500-mile journey from the Colombian border to the Venezuelan capital.

The drugs were stored for several days at the Simon Bolivar International Airport outside Caracas, then placed in 31 suitcases with false name-tags and put on an Air France flight to Paris on Sept. 10, 2013.

Ten days later, French police announced the biggest cocaine haul in their history – the shipment was worth about $270 million – after a meticulous operation involving French, British, Spanish and Dutch authorities.

The foreign agents kept Venezuelan authorities in the dark.

“Why would they tell them about the operation knowing that Venezuela’s military was involved?” Camero told Reuters. 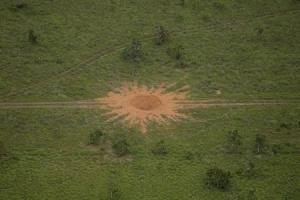 Dubbed the “narco-maletas” or “drug-suitcases” scandal, it is the most high-profile in a series of cases that illustrate Venezuela’s growing role in the global drugs trade.

U.S. and other Western officials, plus domestic political opponents, accuse Venezuela’s military of colluding with traffickers and allege that President Nicolas Maduro’s socialist government is, at the very least, turning a blind eye.

Maduro, who won election last year after Chavez died of cancer, denies that, depicting the claims as a U.S.-led campaign to besmirch Venezuela and pave the way for foreign intervention.

Authorities point to arrests and drugs seizures as evidence they are battling traffickers like never before.

In the last five years, at least 100 military and police officials – albeit mainly low-ranking ones – have been convicted or are in jail awaiting charges of drug-trafficking.

Among 27 people eventually arrested over the Air France case, eight were low-ranking military officers. The rest were airline and airport employees. Their trial is yet to start. 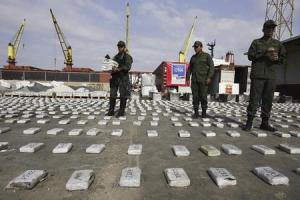 During a raid this month on a clandestine cocaine lab in jungle near the Colombian border, Defense Minister Vladimir Padrino said accusations of widespread corruption were nonsense though he acknowledged there were some rogue officials.

“They are rotten apples, individual actions,” Padrino said after landing with soldiers in a helicopter on a 20-hectare strip of coca and marijuana plantations. The traffickers had already fled by boat to the Colombian side of the inhospitable border.

Anti-narcotics operations this year have brought in 46 tonnes of illegal drugs.

Perched on the northeast shoulder of South America with vast expanses of thinly-populated territory and a long Caribbean coast just a three-hour flight from Miami, Venezuela has many geographical advantages for traffickers. 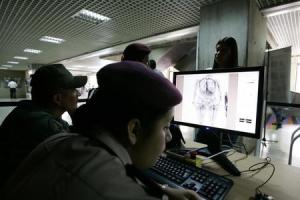 Customs officers use body-scanning equipment, bought in 2009, to check a traveller for drugs at Maiq …

Experts say Colombia’s successes in recent years against left-wing rebels and right-wing paramilitaries heavily involved in the drugs trade have driven traffickers to use Venezuela to ship drugs to Europe, where profits can be up to 40 percent higher than in the United States.

“The leaders of big Colombian gangs have turned Venezuela into their base,” said Steven Dudley, of Colombia-based think-tank InSight Crime.

The U.S. government says the amount of cocaine moved from Venezuela to Europe and the United States has shot up to 300 tonnes a year from 60 tonnes a decade ago. That would mean half the cocaine produced in South America moves through Venezuela.

Nine Venezuelan officials are on the U.S. Treasury Department’s list of people suspected of financial links to trafficking. Five are active or retired military officers.

In 2005, Chavez expelled the U.S. Drug Enforcement Administration from Venezuela, accusing it of spying. 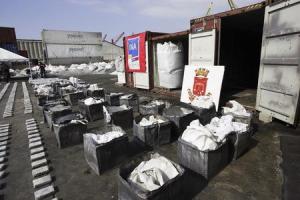 Confiscated cocaine are seen during a presentation to the media in Maracaibo April 25, 2013. REUTER …

Drug seizures, mainly of cocaine and marijuana, jumped 80 percent to 77.5 tonnes that year with Chavez gloating that the anti-drugs fight was more effective without U.S. involvement, although they have since dropped again.

Evidence of widespread trafficking extends from the Simon Bolivar airport to the Colombian frontier.

Ramon Carrizales, a pro-government governor, says his border state Apure is infested with drug gangs. “Money laundering via purchases of ranches on the border must be investigated because they are allowing planes to land safely,” he said.

To combat just that, Maduro has authorized the shooting down of unidentified flights. Official data shows 36 drug planes were caught or downed in 2013, and 25 so far this year.

But opposition politicians and critics say “narco-mafias” still run amok and claim a shadowy military group called the “Sun Cartel” is at the center of it, although they have presented no convincing evidence.

One man who tried, 55-year-old journalist Mauro Marcano, may have paid for it with his life. According to relatives and court documents, he left his home in Maturin town on the morning of Sept. 6, 2004, planning to use his weekly radio show to name military officials he accused of involvement in drug-trafficking.

He never made it: two men on a motorbike intercepted him in his garage and shot him dead.

His family said police agents immediately searched his home, taking documents, recordings and a video camera that he had said contained evidence of the “Sun Cartel”.

The Marcano case was closed in 2008 without convictions but in 2012, after pressure from the family, it was reopened and a local trafficker was sentenced to 23 years behind bars.

Camero, the former anti-drugs agency head, was sacked around the time Marcano was killed.

“I began providing reports on drug-trafficking by the military,” she said in an interview at a Caracas cafe, lowering her voice to add: “That displeased high levels of government.”