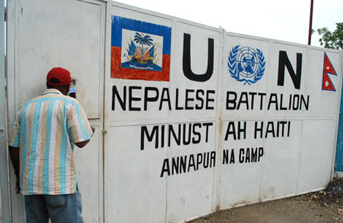 A mathematical model of cholera transmission in Haiti following the 2010 earthquake suggests that current approaches to cholera control and elimination, which focus primarily on improving sanitation, are not likely to solve the problem.  However, eradication of cholera is possible with use of oral cholera vaccine.

“We need to focus on routine vaccination in areas that are at risk of cholera transmission in Haiti,” said Ira Longini, a professor in the College of Public Health and Health Professions and the College of Medicine’s department of biostatistics. Longini is the senior author of the report.

Previous cholera elimination strategies have emphasized the need for infrastructure improvements; the authors, however, suggest that this approach has led to few if any changes in Haiti’s water and sanitation infrastructure. According to the authors, resources should be allocated toward administering oral cholera vaccines, or OCVs, in order to end transmission over the next few years.

Longini stressed the need for urgency, citing climatic instability as a factor that could increase disease occurrence.

“We need to start now,” he said. “We don’t know when the next disaster is coming – the next hurricane or the next earthquake – that could cause another big jump in transmission. We know it is going to happen. We just don’t know when.”

The study relied on data from the Ouest Department of Haiti, a region that includes Haiti’s capital of Port-au-Prince and the surrounding area. It suggests, however, that several vaccination strategies have the potential to end cholera transmission throughout Haiti before 2023 – the deadline established by Haiti’s Ministry of Public Health and Population in 2013 to eliminate cholera from the country.

The vaccine would not need to be 100 percent effective in order to eliminate cholera transmission. In fact, the study’s mass vaccination projections assume that vaccine effectiveness will only be 60 percent – a level surpassed by Shanchol, one the two OCVs prequalified by the World Health Organization, in previous studies.

The WHO manages a stockpile of several million doses of OCVs. Since more than 1 billion people live in regions at risk of cholera, however, campaigns relying on WHO resources will likely have to begin with targeted vaccination instead of mass vaccination. Longini is currently developing models that will identify where vaccination campaigns should be targeted to be most effective.

“Transmission occurs along river systems and in areas with poor sanitation,” Longini said. “UF researchers have been tracking where cholera transmission occurs since the beginning of the epidemic, so we know where to look for transmission.   Now we just need national and international leaders and health policy officials to place a strong emphasis on administering these vaccines to the population.”