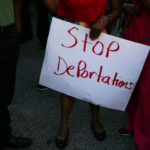 “The provision of a safe haven to those who would face dire conditions if forced to return to their home countries is fundamental to U.S. humanitarian policy,” Benjamin Johnson, executive director of the American Immigration Lawyers Association, said in a statement. “The bottom line is that conditions in Haiti have not improved to an extent that would remotely justify the end of TPS.”

Haitian migrants were first given the protected status in 2010 by the Obama administration after one of the region’s most destructive earthquakes affected an estimated 3 million people and killed more than 200,000. Hurricane Matthew last year decimated the southern region of the nation and killed 1,000 people, halting reconstruction work ongoing after the earthquake. A continuing cholera outbreak has claimed the lives of 10,000 people.

In the spring of 2015, Haitian migrants who went to Brazil in search of work began streaming north to the United States border crossings that lead to Southern California, the New York Times reported. With temporary protection from the Obama administration, extended several times, nearly all were able to enter the United States “because immigration officials were prohibited, under the modified deportation policy, from using the so-called fast-track removal process often employed at the border for new, undocumented arrivals,” according to the New York Times.

The migrants were placed in slower deportation proceedings and released with appointments to appear in immigration court. Most of these Haitian migrants were given permission to remain in the country for as long as three years under a humanitarian parole provision. These are the people the Trump administration is seeking to deport.

President Obama in September ordered immigration officials to resume deportations of undocumented Haitian immigrants, meaning any Haitian migrants who arrived at the border without visas were immediately placed in expedited removal proceedings. This has continued under Trump. In November, the Obama administration quietly deported 200 Haitian immigrants and an estimated 4,400 Haitians were in detention during the same time.

The last extension of protected status for Haitian immigrants in the United States is set to expire July 22. In the letter obtained by USA Today, McCament is proposing an extension to January to allow for a “period of orderly transition.”

This latest move is one of many recent efforts by both the Trump administration and the GOP to target Black immigrants.

More than 4,000 Somalian immigrants were marked for deportation by Immigration and Customs Enforcement, while the federal agency detained an estimated 388 Somali nationals in recent weeks, according to news reports. In January “100 Somalis were removed on the same plane—half the number that was deported in the entire 2016 fiscal year,” America’s Voice reported.

The Black Alliance for Just Immigration (BAJI) has outlined how Trump’s executive orders on immigration impact Black immigrant communities. It seems his orders have emboldened lawmakers. Sens. Tom Cotton (R-AR) and David Purdue (R-GA) in February introduced the RAISE Act, which would restrict family-based visas and eliminate the diversity visa lottery entirely. Nearly 69 percent of Black immigrants come to the United States through sponsorship by relatives or the diversity visa lottery. In an email statement, BAJI called the RAISE Act “one of the most disgusting attacks on Black immigrants to date.”

A final decision on the fate of the 50,000 Haitian immigrants in the United States because of TPS will eventually be made by Department of Homeland Security Secretary John Kelly.

“Having just returned from a delegation to the country, I can safely say that the crisis in Haiti, and the need for TPS, has not abated. In many respects, it has only deepened,” Christine Lin, CGRS senior staff attorney, said in a statement.