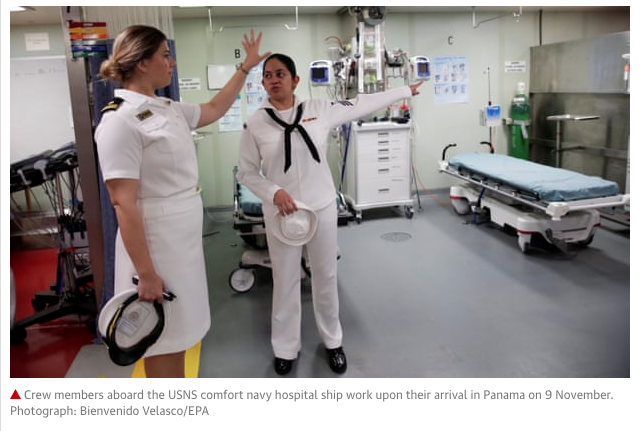 A US navy hospital ship moored off Colombia has started giving free medical care to Venezuelan refugees, in a move likely to rile officials in Caracas who deny the existence of a humanitarian crisis in their own country – and have long been suspicious of the close relationship between Colombiaand the US.

As well as treating Colombians, US medical teams aboard the USNS Comfort will attend to Venezuelan refugees, particularly at the ship’s next stop in Riohacha, a city near the border between the two countries.

Some 3 million Venezuelanshave fled political turmoil and economic hardship at home, including 1 million who have taken shelter in Colombia, which has struggled to deal with the exodus.

Venezuela has been seized by a worsening health crisis amid a dire shortage of drugs, vaccines and sanitary products and outbreaks of infectious diseases.

Last year authorities recorded 406,000 cases of malaria – a disease which Venezuela had come close to eradicating in the 1980s – an increase of 69% from 2016. Measles is also on the rise, and both diseases have spread across the border, worrying Colombian health officials.

The USNS Comfort, which is on a three-month mission that has taken in Ecuador and Peru and will end next month in Honduras, arrived at Colombia’s north-western port city of Turbo on Wednesday.

Patients in Turbo and Riohacha, where the ship will dock next week, will receive medical assistance from the crew of more than 900 doctors, nurses, military technicians and volunteers, with installations aboard the 272-metre-long vessel as well as on shore.

The ship is equipped with a dental suite, four x-ray machines and an optometric lab, and carries 5,000 blood packs – a marked improvement on the rudimentary hospitals in the two cities. Two helicopters will ferry patients between land and the ship.

The mission has been billed as a reflection of the “enduring promise of friendship, partnership and solidarity with the Americas”, according to a statement put out by US Southern Command.

But it has stoked tensions in the region, with China – one of Venezuela’s few allies – hastily dispatching its own hospital ship to Venezuelain September ahead of the US mission.

“This is how you undertake diplomacy in the world,” the Venezuelan defense minister, Vladimir Padrino, said at the time. “With concrete actions of cooperation and not stoking the false voices of those who beat the drum of war.”

Tensions between Washington and Caracas have been ratcheted up recently, with the US national security adviser, John Bolton, labelling Venezuela as part of a “troika of tyranny”alongside Nicaragua and Cuba.

“It’s pretty brilliant PR, isn’t it?” Adam Isacson, a security analyst at the Washington Office on Latin America, a thinktank, said in response to the deployment. “We could just as easily, at similar cost, send a huge contingent of civilian doctors, working on land where the people are, to help tend to the Venezuelan population. But sending a military ship – even though it’s white with a big red cross on it – sends more of a message about projecting US power.”

While US officials describe an enduring alliance with Colombia, Donald Trump has twice snubbed the Andean nation by cancelling planned visits.