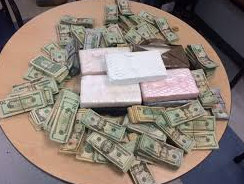 Honduran President Juan Orlando Hernández is one of the main targets of a Drug Enforcement Administration investigation into “large-scale drug-trafficking and money laundering activities” related to the “importation of cocaine into the United States,” according to a court filing.

The document, filed Thursday, states the DEA has been investigating Hernández and eight others since 2013. Hernández became president in January 2014.

The Justice Department did not immediately respond to a request for comment.

Hernández’s brother, Juan Antonio “Tony” Hernández, was charged by U.S. federal prosecutors in New York last November for “large-scale” cocaine trafficking from 2004 to 2016. The charges included bribing local officials in Miami to overlook cocaine shipments arriving in the region, making false statements to federal agents, and possessing and using assault-style weapons as part of his operation.

“Hernandez and his criminal associates allegedly conspired with some of the world’s most deadly and dangerous transnational criminal networks in Mexico and Colombia to flood American streets with deadly drugs,” Special Agent in Charge Raymond Donovan said in a statement.

At the time of the indictment, President Hernández called it a “heavy blow” to the family, adding, “No one is above the law.”

Honduras is at the center of a migration phenomenon that has been unfolding over the past five years. During fiscal 2018, which began Oct. 1, 2017, approximately 76,000Honduran citizens were encountered at the U.S.-Mexico border after illegally crossing north.