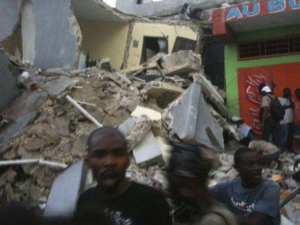 NEW YORK — A US judge heard arguments on Friday in a copyright case pitting a photojournalist who took pictures of the earthquake in Haiti against Agence France-Presse and other news organizations.

Judge William Pauley did not issue an immediate ruling on AFP’s request that the case, filed by Daniel Morel, a Haitian-born freelance photographer, should be thrown out.

Morel posted at least 13 pictures of earthquake damage and victims to micro-blogging service Twitter on January 12, the day of the 7.0 magnitude quake that killed 250,000 people in Haiti.

The photographs were distributed to clients by AFP and its US partner Getty Images and used by other news outlets.

AFP, in a claim filed in March with the US District Court for the Southern District of New York, maintained that Morel provided a non-exclusive license to his pictures when he posted them on Twitter.

“AFP published Mr. Morel’s photographs in good faith with the understanding that by posting them on Twitter, he had granted the requisite license to third parties to use, copy, publish, display and distribute those photographs,” AFP said.

Morel, in a counterclaim filed against AFP, Getty Images, the ABC and CBS television networks and CNN owner Turner Broadcasting Inc., is asserting that AFP and Getty infringed his copyrights, resulting in lost sales.

In his claim, Morel is asking the court to dismiss the AFP suit, rule that AFP, Getty, CBS, ABC and CNN infringed his copyrights’ and award damage