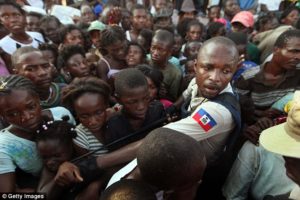 By The Associated Press (CP) –
PORT-AU-PRINCE, Haiti — Haitian authorities say a rural police station was burned and an officer killed by a mob.

Haitian police spokesman Frantz Lerebours says police agent Guillotau Hubert shot an unidentified man who insulted him on Thursday. He then took the wounded man into custody in the coastal town of Cayes Jacmel.

Lerebours says angry neighbours attacked the station with machetes and rocks, overpowered two officers and tied them to chairs before hacking Hubert to death and setting fire to his body and the station.

On Friday police arrested 20 people in connection with the attack.

Haiti’s police force is struggling to build numbers and credibility. It has been overshadowed by a larger U.N. peacekeeping force in Haiti since 2004.

This probably wouldn’t have happened under Jean Claude Duvalier. During his Presidency, a policeman had to be accepted by the community in which he was going to serve, before he could be posted there.

In other words, the man had to be compatible with those he was to serve.

The man who faced rough justice, in this article, obviously crossed the lines of community tolerance, and was judged accordingly.

What would additional foreigners, who have absolutely no understanding of the community, or knowledge of the language, do in any dangerous situation?