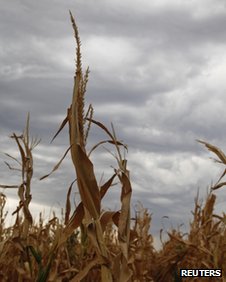 The US Department of Agriculture (USDA) has slashed its forecasts for corn production and predicted sharp price rises, due to a drought and heatwave destroying much of the country’s crop.

It now thinks that this year’s corn yield – the amount produced per acre – will be the lowest since 1995-96.

The US is the world’s biggest producer of corn, soybeans and wheat.

The United Nations (UN) has warned that the dry spells in the Midwest could lead to higher food prices.

The UN’s Food and Agriculture Organization (FAO) has called on the US to suspend its production of biofuel ethanol.

Under US law, 40% of the corn harvest must be used to make biofuel, a quota which the UN says could contribute to a food crisis around the world.

The US argues that producing much of its own fuel, rather than importing it, is good for the country.

The latest forecasts from the USDA suggest that corn production in 2012-13 will be 10.8 billion bushels, some 2.2 billion bushels less than it predicted last month and the lowest since 2006-07.

Drought in US bakes cattle and crops

The USDA lowered its corn yield forecast by 22.6 bushels per acre to 123.4 bushels, citing the extreme heat and dryness.

Dan Basse, analyst at Agresource, said there was room for the yield numbers “to come down more”.

“For those of us who have been in the field, the crop numbers are likely to fall further,” he said.

The USDA expects further rises in prices, and it is predicting that global corn trade will be sharply lower this month “in response to tighter US supplies and higher prices”.

Corn is a staple food in many countries, and is also used in animal feed and to produce biofuel ethanol.

Concerns about the impact of the dry weather in the US pushed corn prices up by 23% in July, according to the latest FAO food price index.

Writing in the Financial Times, the director general of the FAO, Jose Graziano da Silva, said suspension of the quota would allow more of the crop to be diverted for food production.

“The worst drought for 50 years is inflicting huge damage on the US maize crop, with serious consequences for the overall international food supply.

“The situation reminds us that even the most advanced agricultural systems are subject to the vagaries of the weather, leading to volatility in supplies and prices, not just on domestic markets, but also internationally.”

Rick Whitacre, a professor of agricultural economics at Illinois State University, said consumers may see price rises in many food products because corn is used in everything from cereal to cake mixes to cosmetics.

Beef and pork prices could rise by as much as 4% to 6% as many farmers have sold livestock as pastures dry up and feed costs rise.

“You’re going to see the ripple of this go out for quite a distance,” he said.

By law, 13 billion gallons of biofuel must be produced in the US this year. The country’s Renewable Fuel Standard, as the law is known, was designed to reduce greenhouse gas emissions and dependence on imported oil. It has long been controversial, with many blaming the quota for pushing up corn prices.

The US Agriculture Secretary Tom Vilsack said the biofuels standard was having a positive impact on the country.

“It is impacting in a positive way the cost of gasoline in this country – some estimates put it at 25 cents to as much as $1.30 less for gas because we have a biofuel industry.

“There are jobs connected to that industry and less reliance on foreign oil. The question is: Is the market responding to concerns about supply and the answer is yes.

“Exports are down just a bit and ethanol production is down from between 10% and 30%, depending on the part of the country.”

The United Nations is not alone in calling for the quota to be suspended. Livestock producers in the US, worried about the cost of cattle feed, also want it scrapped and the governments of China, India and France have expressed concerns about the policy.