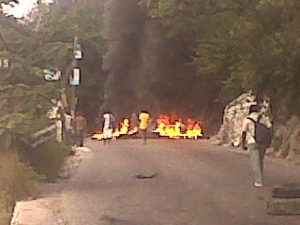 PORT-AU-PRINCE, Dec 8 (Reuters) – Thousands of protesters rampaged through the streets of Haiti’s capital on Wednesday to contest election results, and they torched the headquarters of the ruling government coalition they accused of rigging the results, witnesses said.

Port-au-Prince descended into chaos as supporters of popular musician and presidential candidate Michel Martelly, who failed to qualify for an election run-off in results announced by Haitian electoral authorities, set up burning barricades of timber, boulders and flaming tires.

The unrest, which was also reported in at least one other town in the poor, volatile Caribbean country, appeared to dash international hopes that the U.N.-backed elections could create a stable new leadership for Haiti, which is struggling to recover from a devastating January earthquake.

The protesters in Port-au-Prince set fire to the headquarters of Preval’s ruling (Inite) coalition. Businesses and schools stayed closed and many fearful residents stayed home, off the rubble-strewn streets.

Plumes of black smoke rose above the sprawling, crowded city, which still bears the scars of the Jan. 12 earthquake that killed more than 250,000 people in the Western Hemisphere’s poorest state, which is also battling a raging cholera epidemic.

The protests erupted in the Petionville, Delmas and Canape Vert districts of the capital, among other areas.

Local radio also reported protests in the southern town of Les Cayes in which Martelly supporters burned down government buildings, including the tax and customs offices.

Shouting slogans against Preval, the enraged protesters carried sticks and portraits of Martelly, a star of Haiti’s Kompa music who has already accused the president of trying to rig the election in favor of Celestin, a government technocrat.

Apparently overwhelmed, Haiti’s police made no attempt to halt the protesters, witnesses said. Besides an occasional patrol, there was also no sign of United Nations peacekeepers trying to intervene, they added.

American Airlines (AMR.N) suspended its flights to and from Haiti, local staff told reporters. Port-au-Prince’s airport appeared to be closed but there was no immediate confirmation.

The United States, through its embassy in Port-au-Prince, immediately questioned the CEP results late on Tuesday, saying it was concerned they were “inconsistent with” vote counts observed around the country by “numerous domestic and international observers.

The election unrest could badly hinder a U.N.-led fight against the unchecked cholera epidemic in the country.

The United Nations mission in Haiti (MINUSTAH) and a joint Organization of American States/Caribbean Community election observer mission had given a cautious initial endorsement of the vote, despite acknowledging irregularities.

But U.N. Secretary-General Ban Ki-moon on Friday said the electoral irregularities were “more serious than initially thought” and called on Haiti’s leadership and election candidates to negotiate a “Haitian solution” to avert violence. (Additional reporting by Allyn Gaestel; Writing by Pascal Fletcher; Editing by Jackie Frank)