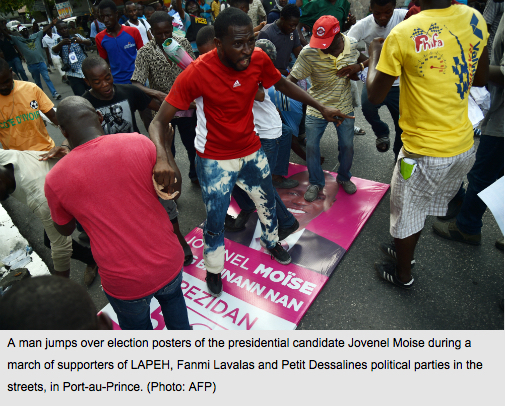 The second round of voting to choose a successor to President Michel Martelly had been due to go ahead on December 27 but was cancelled after fraud allegations.

The first-round of voting and the subsequent lengthy and delayed vote count was marked by street protests alleging official corruption.

An “election evaluation committee” has been set up to determine a way forward, but no new date has been set for the run-off, leaving the western hemisphere’s poorest country once more in political limbo.

After talks in New York, members of the 15-nation UN Security Council issued a statement to express “their strong commitment to supporting free and fair elections.”

They “called on all political forces to work through the electoral process to ensure that the will of the people is reflected in the outcome of the election.”

And the top world body urged all sides “to remain calm, refrain from violence or other provocations and resolve any electoral disputes through established legal mechanisms.”

The vote will pit Jovenel Moise — backed by Martelly and the ruling party — against Jude Celestin, the second-place vote-getter from more than 50 contenders in the first round.

Moise won 32.8 per cent in the first round and Celestin took 25.3 per cent, according to Haiti’s election commission, which some opponents allege is stuffed with Martelly placemen.

The first round of voting was relatively peaceful, in contrast to violence during August legislative elections that left two people dead.

Haiti is still struggling to recover from a devastating 2010 earthquake that killed more than 250,000 people and crippled the nation’s infrastructure.