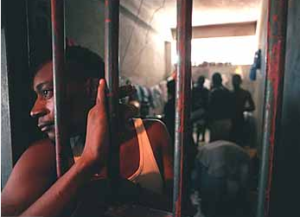 The United Nations is investigating the shooting of dozens of prisoners during a jail riot in the chaotic days after Haiti’s earthquake, a spokesman for the UN peacekeeping mission has confirmed.

The official commented after The New York Times posted a story on its website reporting the riot and suspected killings by police, and said there were indications that Haitian officials were covering up what happened in the town of Les Cayes.

“As far as we’re concerned there was a major human rights violation in that prison,” UN spokesman David Wimhurst said after the newspaper’s story was released.

The New York Times’ account concerns a largely unnoticed riot that took place on January 19, a week after the quake that killed between 230,000 and 300,000 people in Port-au-Prince and surrounding areas, according to government estimates. The report said it appeared 12 to 19 prisoners were killed and up to 40 wounded by gunshots.

The newspaper said the riot started when some of the 467 prisoners, severely overcrowded and terrified by aftershocks, tried to escape.

Haitian police and UN peacekeepers from Senegal surrounded the prison to prevent a mass exodus like the one that occurred at Port-au-Prince’s main prison days earlier.

Mr Wimhurst said that at some point, Haitian police rushed the building and opened fire. He said UN police saw the bodies of 10 dead prisoners but more people were believed to have been killed and dozens more wounded.

The UN opened an internal inquiry on May 12 and a more extensive formal inquiry is possible. Mr Wimhurst said the UN investigation was delayed because of the heavy toll the earthquake took on the 9,000-member peacekeeping force, including the collapse of its headquarters – the largest single loss of life in the world body’s history.

“Seven days after the earthquake we were still digging ourselves out of the rubble,” he said about the day of the riot in Les Cayes, a coastal town about 100 miles south-west of the capital and out of the main quake zone.

Haitian authorities are also said to be investigating.

Sometime during Preval’s first shot at being Prime Minister, under Aristide, there was a problem at the National Penitentiary. Seems as though the convicts were demonstrating for some reason.

Preval and General Raoul Cedras went to the jail.

As they stood outside, Preval called the police commander and told him to select 10 prisoners, and shoot them.

Cedras asked him to wait. He would go an talk with the prisoners.

Preval was disgusted, but agreed.

Cedras went in and spoke with the men. After about 15 minutes he came out of the building, having restored peace and order.

Preval shrugged and commented. “That may have worked, but it is not my way…”

Preval would have murdered 10 men when a few words would solve the problem.

That is the same man who now holds life-and-death power over Haiti.