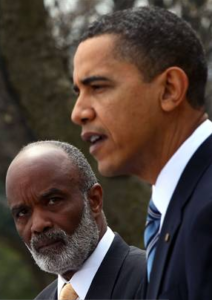 ARCAHAIE, Haiti — Surrounded by waving banners of blue and red, Haitian President Rene Preval pledged Tuesday to step down as scheduled next year, rebuking critics who say he is using the post-earthquake emergency to hold onto power.

Preval told thousands celebrating Flag Day in the seaside town of Arcahaie that he will step down at the end of his term, Feb. 7. The two-term leader sparked protests this month when he adopted a decree that would extend his term by up to three months if a planned presidential election is not held by the end of November.

“This is the last May 18 I will spend with you as president,” Preval said. Pledging to pass his office to a successor on the constitutionally mandated day, he added, “I will go and my heart will be calm.”

A group of men positioned near the dais let up a supportive cheer. A group of hecklers in the back chanted, “He must go!” — ironically the same message, though with a markedly different tone.

In Port-au-Prince tires were burned in front of a university, several large demonstrations took place.

The town is where a revolutionary congress adopted the flag in 1803 by taking the French tricolor and ripping out the white part. On Tuesday, red and blue banners declaring “Together let’s remake Haiti” were hung along the road from the capital.

School groups and marching bands waved flags and danced in the town’s square. Teenagers and 20-somethings left their cracked homes and tents behind, packing buses and pickup trucks for drives to turquoise-water beaches for all-day parties.

Holding elections on time will be difficult. Much of the electoral council’s headquarters and records were destroyed in the quake. Officials must also contend with the loss of polling places, countless voter deaths and the displacement of 1.5 million people.

A February election for legislative seats was canceled because of the disaster, leaving Haiti with a third of a parliament for the foreseeable future.

The Organization of American States and United Nations say elections can be held before the end of the year — if needed political decisions are made on time.

A series of accelerating demonstrations, throughout the country, are sending a message to Preval and his associates.

So too are diplomatic representatives who press Preval for his departure, as  scheduled, after elections this coming November. Preval had pushed through an unconstitutional amendment to the Electoral Law by paying parliamentarians several million US for their votes.  The reactions were immediate, and blunt. Preval must go as scheduled.

The Haitian people do not trust Preval’s word now. It has been worthless, in the past….so they will continue demonstrating until he finally gets the message.