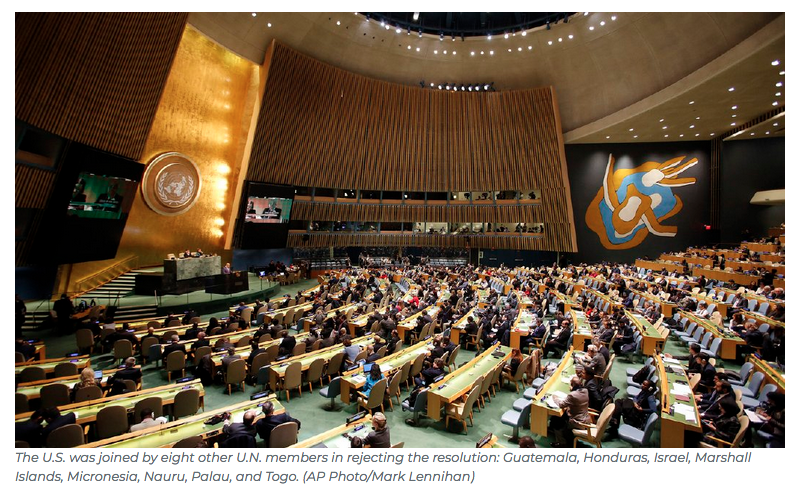 That warning from the U.S. was met with hostility from other UN members.

“Such an attitude is unacceptable,” Turkish Foreign Minister Mevlut Cavusoglu said of the “bullying” threat from the U.S. “You can be strong but it doesn’t make you right.”

The U.S. was joined by eight other U.N. members in rejecting the resolution: Guatemala, Honduras, Israel, Marshall Islands, Micronesia, Nauru, Palau, and Togo.

Thirty-five other members abstained, including Canada. That’s a relatively strong showing for the United States, which usually comes out on the losing side of Israel-related votes at the UN.

“While the resolution passed, the vote breakdown tells a different story,” a spokesperson for the U.S. mission to the UN told reporters after the vote. “It’s clear that many countries prioritized their relationship with the United States over an unproductive attempt to isolate us for a decision that was our sovereign right to make.”

Haley, and President Trump himself, had warned repeatedly that a vote in opposition to the American position could lead to a reduction in foreign aid. She reiterated that point during the Thursday morning debate on the resolution.

“The United States will remember this day in which it was singled out for attack in the General Assembly for the very act of exercising our right as a sovereign nation,” she said. “We will remember it when we are called upon to once again make the world’s largest contribution to the United Nations. And we will remember when so many countries come calling on us, as they so often do, to pay even more and to use our influence for their benefit.”