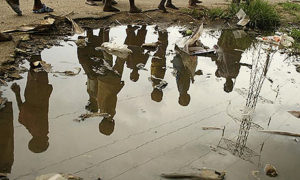 Ban Ki-Moon has appointed Paul Farmer, a doctor and professor at Harvard Medical School, to “help galvanize support for the elimination of cholera in Haiti,” the United Nations said in a statement. He will also be charged with advising “on lessons learned” from the epidemic and “how those can be applied in Haiti and other settings,” the statement added, without making any reference to the cause of the outbreak. Earlier this month, the UN launched an appeal for $2.2 billion to finance a campaign to halt the epidemic, which has exceeded 620,000 cases since it began in October 2010. Farmer, 53, heads Harvard’s department of global health and social medicine. From 2009 to 2012, he also served as deputy to the UN special envoy for Haiti under former US president Bill Clinton. A huge UN operation has been helping the impoverished country with its political strife and the aftermath of a giant earthquake in January 2010 that killed an estimated 250,000 people. While a UN investigation found there was no way of knowing what caused the cholera epidemic, a growing number of experts, including some from the US Centers for Disease Control and Prevention, have said the cholera strain in Haiti matched the prevalent strain in Nepal. The outbreak has been traced to a camp of Nepalese peacekeepers in the town of Mirebalais. Lawyers for some victims and families of the dead have called on the United Nations to pay hundreds of millions of dollars in compensation and threatened a court case. UN officials said 70 percent of the $2.2 billion needed in the next decade would be used to build water and sanitation facilities. The UN said it would also buy quantities of a new oral vaccine.