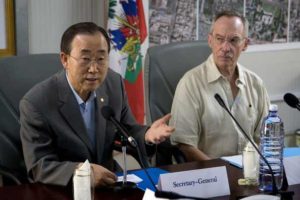 Secretary-General Ban Ki-moon announced Monday that Mariano Fernandez will replace Edmond Mulet as head of the seven-year-old international peacekeeping force at the end of May.

Mulet took the job after his predecessor, Hedi Annabi, died in the 2010 earthquake.

Fernandez inherits a military force of more than 12,000 soldiers and police that has come under increasing criticism as the Caribbean nation struggles to rebuild.

A U.N. panel recently acknowledged after months of denials that its troops likely introduced the cholera bacteria that has killed nearly 5,000 Haitians.