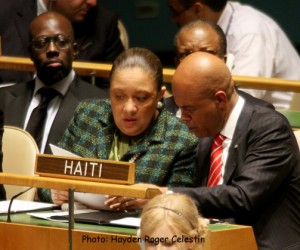 The United Nations Office of the Special Envoy for Haiti said Tuesday that more than half of the $5.33 billion pledged by donors to help the Caribbean nation rebuild after the 2010 earthquake has been released.

An analysis of pledges made at a donors’ conference shortly after Haiti’s 2010 earthquake revealed that $2.79 billion, or 52.3 percent of the approximate $5.33 billion pledged by 55 donors for recovery activities between 2010 and 2012, has been disbursed.

The bulk of that money, or almost three quarters, were grants awarded to the Haitian government, non-governmental groups and private contractors.

Another 10 percent went toward grants that supported the U.N., Inter-American Development Bank and World Bank. The rest went toward loans and budget support to the Haitian government.

The U.N. Office of the Special Envoy for Haiti is run by former U.S. President Bill Clinton. The bureau has been tracking the pledges made at an international donors’ conference in New York that came two months after Haiti’s massive earthquake in January 2010. The disaster displaced more than a million people, toppled thousands of buildings in the capital and other southern cities, and killed an estimated 314,000 people.