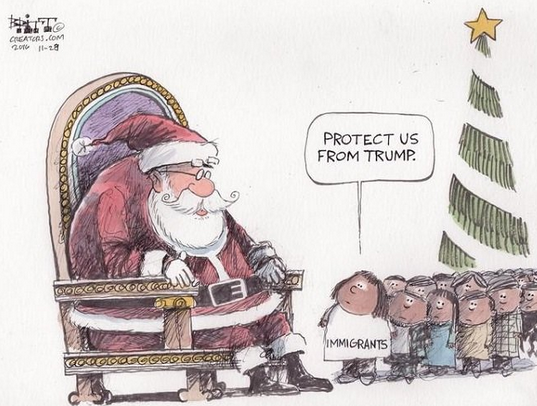 Immigration from the Caribbean island nation of Haiti continues to be dismally low throughout the U.S., which has spurred an exodus to Canada for fear of deportation. The welcome mat to U.S. citizenship introduced 10,200 newly naturalized citizens on Aug. 22, at the Los Angeles Convention Center. During Fiscal Year 2017, the USCIS L.A. District welcomed 85,640 new citizens, while USCIS welcomed 752,800 people nationwide.

MIAMI — Beads of sweat trickled down her forehead as Carole Wembert dragged one bulky black-and-red suitcase and toted two other bags, the load weighing heavy on both her mind and body as she approached the border crossing.

After 15 years in the United States, the Haitian immigrant had quit her job at Walmart in Fort Lauderdale, Fla. She packed up her four children, flew 1,200 miles to New York City, took a bus for seven hours and then a taxi before finally reaching the heavily forested spot on the U.S.-Canada border that has become a word-of-mouth entry point to a new life for Haitian immigrants.

The future in Canada was uncertain, but she was pretty sure what she faced in the U.S.: deportation.“The president doesn’t want the immigrants to stay,” Wembert said.

She was repeating the widely held belief among some immigrant groups that President Donald Trump is closing the door to immigrants. Haitians, in particular, are worried because nearly 60,000 — including Wembert — have been living in the U.S. under Temporary Protected Status (TPS), the special humanitarian relief given to Haiti since its devastating 2010 earthquake left more than 300,000 dead.

The Trump administration has been increasingly signaling that it may end the status for Haitians in January. That’s fueling an unprecedented exodus of mostly Haitian immigrants from the United States across a dirt and gravel-covered ditch in upstate New York to Canada.

More than 3,800 migrants have flowed into Quebec during the first two weeks of this month, Royal Canadian Mounted Police spokesman Claude Castonguay said during a press conference on Aug. 17.

Carole Wembert and her four children of Fort Lauderdale crossed the border to Canada at the dead end of the U.S. side of Roxham Road a week ago on Aug. 12. Thousands of people have crossed over into Canada from an irregular crossing near the Champlain-St. Bernard de Lacolle border in hopes of finding residency in Canada. Among them are Haitians who worry that Temporary Protected Status in the U.S. could soon end under the Trump administration.

Wembert said she needed to flee the U.S. to save her children. Three of the four were born in the U.S. and she says there are no prospects for her children in Haiti.

“I don’t want to go with my kids to my country,” Wembert said. “With what am I going to take care of them if I go back?

“I felt that I had no other choice but to come here with my children,” she added.

As the illegal flow of Haitian migrants continues into Canada’s French-speaking Quebec province, many families like Wembert’s — with U.S.-born children — could face a painful dilemma, say immigration experts: what to do with their children if they are deported to Haiti.

To win an asylum claim in Canada, migrants will have to convince an independent immigration and refugee board that they would be at risk of persecution or even death if they returned to their homeland. Failure to prove it means deportation.

Despite being allowed to enter Canada, many Haitian immigrants aren’t granted asylum. “The success rate for last year, 2016, was 50 percent so you’re facing a very real risk of being refused,” said Richard Goldman, an immigration attorney with the Committee to Aid Refugees in Montreal.

“It’s not an easy case to make especially if you’ve been living in the States for many years.”

Even if parents win asylum, their U.S.-born kids will be refused, Goldman said, because they would not be in danger in the U.S. The parents, however, can include the kids in their permanent residence applications so they can remain in Canada.

“They have to think, ‘Am I being threatened if I go back to Haiti and can I prove that?’ ” said Francine Dupuis, who oversees PRAIDA, a Quebec government-funded program that supports asylum seekers after their arrival. “If they are not in that situation if they were only in the States because there was an earthquake and their country is poor, that is not enough to become a refugee. They have to think about that before they cross the border.”

Under a 2002 agreement between Canada and the U.S., migrants must apply for refugee status in the first country they arrive in. A migrant crossing into Canada at a regular U.S. border point will be told to turn around and claim refugee status in the U.S. But the treaty, known as the Safe Third Country Agreement, only applies at land ports-of-entry where border guards can visually confirm that a migrant is entering one country directly from the other.

Over the years, asylum seekers have realized that if they can make it past the border at an illegal entry point, such as the Roxham Road crossing in upstate New York, where there are no border guards, they can request asylum from within Canada.

Jacqueline Charles is a reporter for the Miami Herald, where this story first was published.

This truly sad story should not be unfolding.

The lady is leaving 15 years that built a life to parachute into nothing.

Canada could deport her back to Haiti since she really has no basis for claiming Asylum. Her children, being American, are left in limbo.

All of this because some Haitian decided to peddle a load of garbage and use it to make money.

Haitians should stay where they are, get an attorney to file for a court hearing on their deportation and wait for the court date.

It could be 15 years in the future.