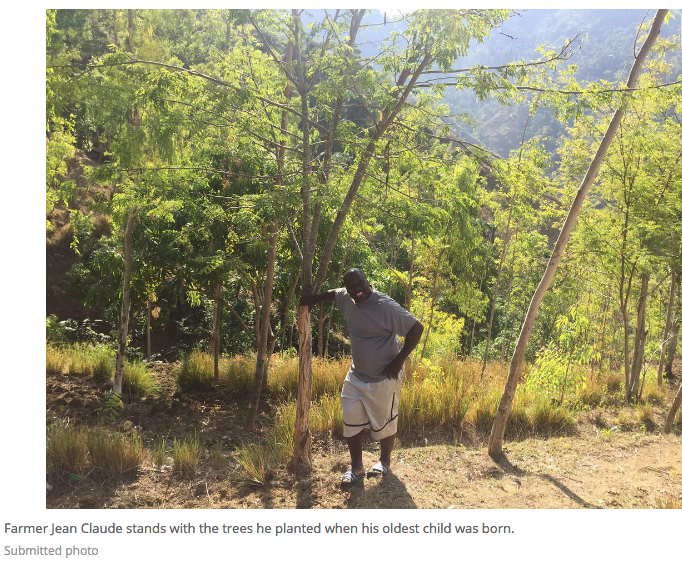 The Haiti Reforestation Partnership took the old adage about teaching a man to fish to heart.

In a decades-long effort to improve the quality of life for the small Caribbean country, Haiti Reforestation Partnership learned early that the best way to turn things around was to let the locals take complete ownership of the reform, to teach them how to breathe life back into their land and let them work the magic—and reap the benefits.

“Once they started seeing the results of what they can accomplish with just basic agricultural knowledge and skills, they were able to feed their families, preserve their land and then see their land become productive,” said Susan Yelton, a member of All Saints Episcopal Church in Concord and longtime participant in Haiti Reforestation Partnership. “My first trip was in ’99, and the land was just barren. I’ve been there seven times, and I can see the difference.”

The partnership began in 1990s when Jack Hanna, who had retired and was sailing around the Caribbean, witnessed the crisis in Haiti firsthand.

“He stopped in Jamaica, and he heard about Haiti,” Emily Badgett, Haiti Reforestation Partnership intern, said. “He sailed over to Haiti and saw the need. He was the visionary for the project.”

Hanna went back to his home in New Bern, and two churches there worked together to form Haiti Fund Inc. Now, more than 25 years later, the organization has grown to about 60 churches and other community members all across the East Coast. The group has planted 14 million trees in Haiti using its signature CODEP method, covering an area roughly the size of Asheville.

Given the program’s success, Badgett said organizers want to expand beyond the 58-square-miles currently covered. The group changed its name to The Haiti Reforestation Partnership and began to think more broadly.

Haiti’s forest have succumbed to deforestation going back centuries, back to when France held the country as a colony in the 1800s. Losing lush forests en masse has not only wreaked havoc on wildlife but also contributed to severe erosion.

“Without forests, there’s no root system to support the soil,” Badgett said. “So when they have an earthquake or hurricane, soil disappears, and when the soil disappears, their crops and their homes go along with it.”

Simply planting trees back isn’t as simple as it sounds, either. Haiti’s mountainous terrain makes reforestation something of a challenge.

The Comprehensive Development Project, or CODEP, uses a trellis system planted with grasses to first restore and claim the soil enough to support the trees.

“You start on a bare hill,” Yelton said. “We taught them how to kind of terrace it, and they would plant eucalyptus trees. The eucalyptus was good in many ways: A goat wouldn’t eat it, and if you cut it down, it grows back really fast, so you don’t lose the root structure. So we went in with very basic, start from scratch, teaching them how to compost, how to build a tree nursery, and we started planting trees literally by the millions, hundreds of thousands every year.”

Once the eucalyptus trees are in place, they planted fruit trees so farmers would have something to feed their families and sell to make a living.

But the other crucial piece to the CODEP method is it acts as an incentive-based reforestation program.

“The biggest problem is they cut [trees] down for coal,” Badgett said. “So you gain points, and after so many points you can get a house built, an addition to the house. We’ve always kept this mentality of a point system in order to help our farmers because it’s difficult to tell them to plant this but you won’t get any immediate benefits. We’re teaching them that by keeping it in the ground, you will get benefits in the long term.”

But the program wouldn’t work unless the Haitians themselves bought in. Yelton said Haiti Reforestation Partnership has been almost as much about education as about planting trees, teaching the locals how to do the work and then just providing the funding and supplies to make it happen. Though she has been down to the watershed where the partnership is working, Yelton said she hasn’t done any physical planting in years; that would be taking a job from a Haitian, she said.

“It was a very slow start to get the Haitians on board with us because they hadn’t seen it; they hadn’t seen any results,” she said. “We started slow. We built core groups. They were led by Haitians, so this was better than someone from the outside coming in and telling them what to do.”

Badgett said Haiti Reforestation Partnership’s CODEP method is the most successful in the country. The Cormier Watershed where they began working in 1990 has grown to encompass six other watersheds, and workers have begun sharing their process with other groups in the hopes to spread its success to other parts of Haiti, as well.

“It’s very difficult to plant trees, but we’ve been working there for 26 years, so we have a method that’s working and continues to grow,” Badgett said. “It’s made a difference in the six watersheds that we work in, and it’s slowly making its impact across the country with other small reforestation projects. There’s a lot of nonprofits that are doing amazing work, but it seems like they’re beating around the bush, and I feel like reforestation is one of the most successful and sustainable ways to make an impact in Haiti; when you make an impact, it will last beyond the generations that’s doing it. Reforestation is the one thing I think will live past you.”

Part of the growth process means finding more money to make it work. Badgett said the group is currently in the process of fundraising to buy two trucks. A dealer in Florida agreed to donate the vehicles.

“The idea is that we have one truck, but it’s not working properly right now, and we really need a truck to get to these locations because it’s the size of Asheville, so getting there is a little difficult,” she said, adding the trucks would help transport people, supplies and seedlings. “The other option is for our farmers to walk the distance, more like hike the distance, but we want to be able to get them where they don’t have to take more time out of their day because they spend a day of their work week to work with us.”

The partnership has already raised more than $15,000 in the Bucks for Trucks campaign, including a $6,500 match.

Yelton, who has participated in the program since All Saints joined in 1999, said the experience has had an impact on her life, as well.

“As one person, you can’t do a lot to change all the problems of the worlds,” she said. “But All Saints and many other churches have made a difference, a true difference, in this corner of the world.”