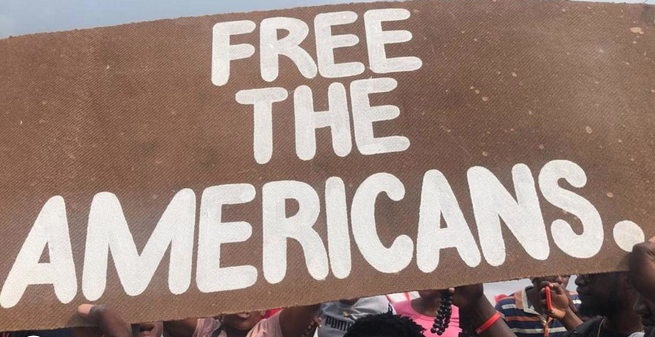 The Biden administration is urging U.S. citizens in Haiti “to strongly consider returning to the United States” amid a gang-aggravated fuel shortage and a deteriorating security climate in which 17 Christian missionaries, including 16 Americans, have been held hostage more than three weeks.

The message in a Friday security alert from the U.S. Embassy in Port-au-Prince came as Haiti’s commercial banks and other businesses announced reduced hours starting this week, grocery store owners warned of coming food shortages and the United Nations encouraged employees to stock up on emergency supplies of water, food and other essential items.

“The U.N. can confirm that a message was sent to all U.N. staff on 28 October strongly advising them, due to the prevailing security and fuel situation, to stock at least 14 days of emergency supplies of water, food and necessities,” Daniel Dickinson, a spokesperson for the U.N.’s political office in Port-au-Prince, said. “This advice is in line with the U.N.’s security and contingency planning.”

Americans in the country are being encouraged to depart while commercial flights are still available, noting that while the security situation has been unpredictable for months, the environment has deteriorated rapidly in recent days.

“It sounds like an abdication of any kind of responsibility,” Robert Maguire, a longtime Haiti expert who once prepared U.S. diplomats being sent to Port-au-Prince, said of the responses of the U.S and the U.N. to the unfolding crisis, which is expected to get worse this week if authorities don’t manage to supply fuel. “I think this administration would prefer for Haiti to go away. But it’s not going to go away. It seems that there is no real unanimity of what to do in this administration.”

A U.S. State Department spokesperson said that the welfare and safety of U.S. citizens abroad is the highest priority. The U.S. has been encouraging U.S. citizens for some time to avoid non-essential travel to Haiti and those deciding to travel to Haiti should carefully consider the information available on travel.state.gov regarding the extremely high risk of kidnapping.

“Our Travel Advisory for Haiti is a Level 4: Do Not Travel due to kidnapping, crime, civil unrest, and COVID-19,” the spokesperson said. “Kidnapping is widespread and victims regularly include U.S. citizens.”

Over the weekend, ramped up gang shootings in Port-au-Prince led to panic and deaths and further dashed hopes that fuel tankers would be able to get through gang-controlled territories to access blocked distribution terminals.

A justice of the peace confirmed to Le Nouvelliste, the country’s daily, the deaths of a 95-year-old woman and her driver as they crossed Martissant 7 on Saturday, where there were other unconfirmed reports of deaths during a gang rampage less than a half-hour away from the presidential palace.

That same day, at the other end of the capital, in Croix-des-Bouquets, bandits opened fire on a vehicle, killing a young child and injuring his father and older brother. The incident was confirmed by the Evangelical Theological Seminary of Port-au-Prince, which said that its student coordinator, Pastor Stanis Stifinson, was in the car with his children.

When the unabated gang violence and political instability aren’t leading to deaths, they are crippling everything from cellphone service to COVID-19 treatment to schools and food supplies.

“Children in classrooms across urban areas are increasingly becoming targets for robbery or ransom,” UNICEF said in its latest plea about the vulnerable state of children in the country. “Gang violence is fast becoming another reason for parents not to send their children to schools.”

Since June, the violence has forced at least 19,000 people in metropolitan Port-au-Prince to flee their homes and thousands of school children to interrupt their education, the U.N. said. The growing violence is also affecting the recovery efforts in the south of Haiti, where a 7.2 earthquake in August killed over 2,200 people and left 800,000 in need of humanitarian assistance.

Haitians say the current crisis is the worst to hit the country since the the 1990s, when the international community and Clinton administration maintained economic sanctions after a Sept. 29, 1991, military coup toppled Haitian President Jean-Bertrand Aristide.

Unlike the U.S. embargo, which shattered the Haitian economy after the international community blocked Haiti’s military junta from carrying out imports or exports, the current crisis is being aggravated by a deteriorating security environment.

Since Oct. 17, armed gangs have been blocking fuel tankers from transporting petroleum products from two distribution terminals in the capital. In a middle-of-the-night address last week, interim Prime Minister Ariel Henry said police had created “a security corridor” to get gasoline and fuel shipments to key areas, including some hospitals and cellphone companies.

But the corridor, which allowed fuel to begin flowing again on Oct. 27, was quickly shut down by gangs, leading to frustration and long lines at the few stations that did manage to get gasoline and diesel.

As a result of the shortage, a key hospital in the capital, Bernard Mevs, announced it’s closed for patients, while others have been turning away even emergency cases. Schools, factories and other major businesses have also temporarily shut their doors. .

On Friday, Haiti’s national water authority said the inability to get fuel means that potable water in the capital of nearly 3 million will also become scarce because without diesel, the National Directorate of Drinking Water and Sanitation cannot operate its 20 pumping stations.

“It’s a total collapse and nobody can predict what will happen next week,” said Frantz Bernard Craan, the former head of the Chamber of Commerce of Haiti Industry. “The situation looks like the one we had during the embargo. At that time, we lost 30% of GDP in two years but we didn’t have the insecurity that we are having now.”

Gasoline, which is being taken by gangs, who are also kidnapping fuel tank drivers, is currently being sold for as much as $30 a gallon on the informal market. “Prices of basic commodities are going sky high when you can find them,” Craan said.

The Biden administration has sent teams to Port-au-Prince to evaluate the security situation, and FBI agents are still trying to secure the release of the missionaries and their relatives. They were kidnapped over three weeks ago in the Croix-des-Bouquets area after returning from visiting an orphanage. The group includes an eight-month-old baby.

In an interview Friday with Haitian reporters in Port-au-Prince, new U.S. chargé d’affaires Kenneth Merten, when asked about calls for a U.S. intervention or support for a U.N. peacekeeping mission, said, “We don’t want to be accused of meddling.”

“If only because of its geographic proximity. But now that has been reinforced more because of its diaspora and its engagement in American domestic politics. Haiti is as much an international issue as it is a domestic issue now,” he said.

The U.S. can’t afford to continue to ignore Haiti or Haitian voices and has to start addressing the country’s multidimensional crises by sending messages that impunity does not rule the day, Maguire said.

“You do that by enforcing your own laws in the United States on financial dealings and that sort of thing. It’s the same thing that the Congress said in its April 26 letter; the 62 people who signed the congressional letter to the administration,” Maguire said. “One of the strong points they made was, you’ve got to start battling impunity and violence in Haiti by ending the sources and by going after the sources in the U.S.”

The State Department spokesperson said the U.S. shares deep concerns over the effects of the ongoing fuel shortage on all people in Haiti, and the embassy is in contact with the Haitian government, including the Haitian National Police as well as private sector fuel importers and retailers, to encourage a speedy resolution to the crisis.

Some Haitians, however, would like the U.S. and its international partners to do more than travel warnings or its support of the Haiti National Police, which continues to be outgunned by the gangs.

In a letter to Biden on Monday, over 1,000 religious leaders urged fundamental changes in U.S. policy in Haiti to support civil society.

“The U.S. can help by stopping the flow of weapons into Haiti, sanctioning corrupt public and private sector actors, freezing assets, and providing U.S. financial aid to Haitian institutions rooting out impunity and corruption,” the letter said.

Though insecurity has been growing in Haiti, it has gotten worse since the July 7 assassination of Haitian President Jovenel Moïse. His death provoked a power struggle among members of civil society demanding to be put in charge of the country, his loyalists seeking full control of the government and opposition parties that had opposed the late president. One leading gang member offered to allow fuel tankers to pass in exchange for Henry’s resignation.

Biden administration officials say that, while they are more focused now on the acute security crisis than on political discussions under way in Haiti, they continue to call for elections as soon as possible.

“What that means is, rather than looking to establish an arbitrary date, we’re focused on establishing the enabling environment for elections — so that is, obviously, starting with the security situation, but also support for a negotiated accord,” a senior administration official told reporters last week.

The official insisted that the administration is focused on Haiti, saying that based on the direction they have received from President Biden and Vice President Kamala Harris, they have to “think ambitiously on Haiti, think long-term, and try and build a bipartisan road map that goes beyond what has traditionally been in Haiti a very short-term focus on stability.”