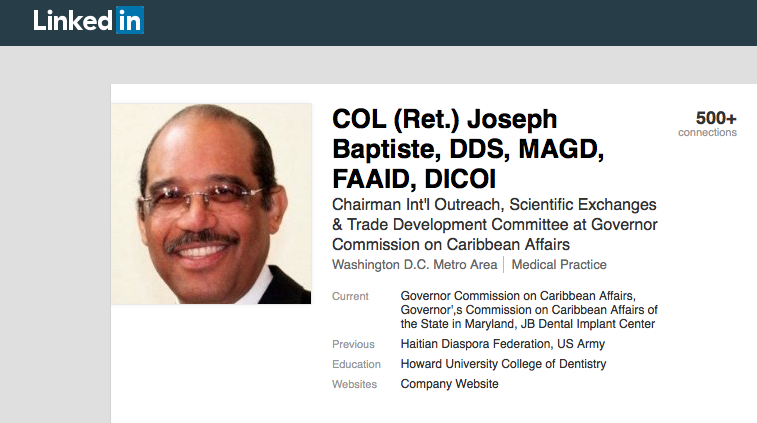 The U.S. Attorney’s Office in Massachusetts has charged a retired U.S. Army Colonel for conspiring to bribe officials in Haiti.

According to federal officials, 64-year-old Joseph Baptiste is charged with money laundering and facilitating bribes in connection to a proposed project to develop a port in Mole-Saint-Nicholas, Haiti.

The proposed project was expected to cost around $84 million and involve a number of peripheral projects.

Baptiste allegedly told agents during a recorded meeting at a Boston hotel that he would funnel payments to Haitian officials through a non-profit organization he controls based in Maryland to secure government approval for the project.

He was allegedly recorded in a phone call with a federal agent saying the official would need $25,000 to approve the project.

“It is alleged that after undercover agents wired approximately $50,000 to the non-profit controlled by Baptiste for the purpose of bribing Haitian officials, Baptiste used the $50,000 for personal purposes, though he intended to seek additional money from the agents to use for future bribe payments in connection with the port project,” a news release about the charges reads.

Born in Port-au-Prince, Haiti, the son of an attorney-father and an accountant-mother, Dr. Joseph E. Baptiste was attracted early to the medical profession with a strong desire for healing, restoration, and rebuilding the health of people. He immigrated to the United States at age 15 and completed secondary school in Chicago. He matriculated through the University of Illinois Circle Campus with a Bachelor of Science degree in biology-chemistry. After one year as a Microbiological Researcher with Johnson Product & Company Research Center in Chicago, Dr. Baptiste attended Howard University School of Dentistry. Upon receiving his Doctor of Dental Surgery degree, Dr. Baptiste joined the US Army where he completed his dental surgical residency program, and actively served for four years as staff Dental Surgeon at Walson Army Hospital Center.

As an Army Major, Dr. Baptiste served on active duty in Iraq during the Desert Storm campaign of 1991. He has a distinguished military service rising to the rank of Colonel. Dr. Baptiste was called upon to go to Iraq serving as chief of a medical/dental detachment in the Global War on Terrorism “Defending Freedom” mission. Already a highly decorated soldier, Dr. Baptiste was awarded the National Defense Service Medal, the Global War on Terrorism Service Medal, the Armed forces Expeditionary Medal, the Army Meritorious Unit Award, Army Achievement Medal, and the Army Commendation Medal. He is currently Chief of Dental Services of the 2290th USAR at Walter Reed Army Medical Center.

Recognized in the dental community as one of the most skilled dental health surgeons in the nation, Dr. Baptiste was appointed in 2000 as a member of the State Board of Dental Examiner, and is a member of the Northeast Regional Board. His private practice, J.B Dental Implant and Reconstruction Center, in Silver Spring, Maryland is recognized as one of the most advanced in the field of implantology. He holds a Mastership at the Academy of General Dentistry, a distinction attained by only 10 percent of his peers. He is a Diplomat of the International Congress of Implantology, and a Fellow and Diplomat of the American Academy of Implant Dentistry and the American College of Forensic Examiners. His many professional awards include: Who’s Who Among Outstanding Americans and Who’s Who Among Outstanding Executives and Professionals. The Washingtonian Magazine named him one of the Top 100 Best Doctors in the Washington, DC, Maryland, Virginia area.

Dr. Baptiste has distinguished himself in working on Haiti’s behalf, including by establishing the National Organization for the Advancement of Haitians (NOAH in 1991, the leading social policy advocacy organization on Haiti in the United States. NOAH has played a pivotal role in addressing some of the social and economical needs of the poor and disenfranchised by sponsoring medical and dental screenings in Haiti 10 years running; ensuring that potable water is accessible for an entire village; and when necessary, influence United States policy vis-à-vis Haiti. Under Dr. Baptiste’s leadership, NOAH has partnered with the fourth largest bank in Haiti, Promobank, forming PROMOCAPITAL, a venture capital bank to bring together experienced, competent Haitians and Haitian-American leaders to create an investment infrastructure with global potential to contribute to the future welfare of the local community in Haiti and in America. Over 10 million dollars have been invested in Haiti’s local economy as a direct result of NOAH’s investment initiatives.