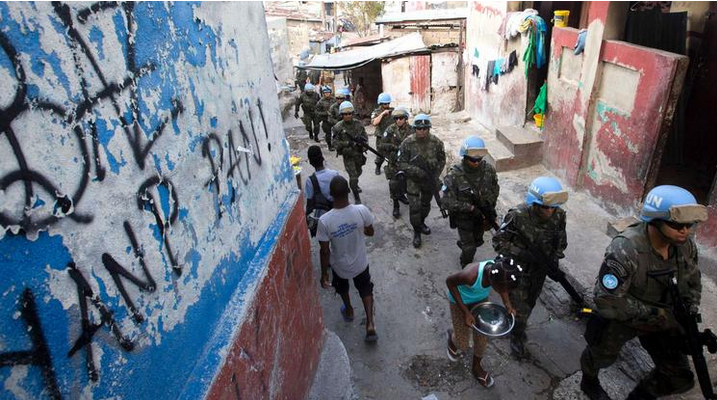 The United Nations’ recent announcement that it would end its peacekeeping mission in Haiti in mid-October, removing its soldiers and leaving a smaller contingent of police, has been met with celebration, apathy and concern.

It also raised the perennial question: What’s in store for Haiti now?

The decision to pull out the military component of the United Nations Stabilization Mission in Haiti, commonly known by the French acronym MINUSTAH, recognizes the progress that the Caribbean nation has made toward stabilization, including last year’s presidential election and the return to constitutional order, U.N. officials said.

“These are all indications that the people of Haiti are ready to move forward,” Sandra Honoré, U.N. special representative and head of MINUSTAH, said in an interview with The Times.

The resolution calls for the more than 2,300 blue-helmeted personnel to gradually depart while 1,275 U.N. police remain for an initial period of six months. The mandate of the follow-up mission will be to train Haitian national police and support the government in maintaining the rule of law, human rights and stability, Honoré said.

“Haiti is ready to move on without the presence of the military contingent,” she added.

But what will this mean for the poverty-stricken country of more than 10.4 million people that has been beset by political tumult and had successive U.N. peacekeeping missions for more than two decades?

The U.N. military presence was never really welcome. Peacekeepers first arrived in 1994 to facilitate the return of ousted President Jean-Bertrand Aristide, secure a stable environment in the country and promote the rule of law.

Various U.N. missions followed until MINUSTAH was established in 2004, following Aristide’s second removal from power. His overthrow was among more than 20 military coups in Haiti since the country won independence from France in 1804.

But the presence of U.N. troops in the country sparked controversy.

“There’s been an ongoing question over whether Haiti ever needed peacekeepers,” said Jake Johnston, a research associate at the Center for Economic and Policy Research in Washington, D.C. “It’s not a country with an ongoing civil war. It’s not at war with any of its neighbors.”

“In many respects, Haitians have chafed over this incursion into their sovereignty,” said Robert Maguire, a professor of international affairs at George Washington University. And various politicians had called for the U.N. mission to end.

In recent years, the peacekeepers have been plagued by controversy. They were blamed for a 2010 outbreak of cholera in Haiti that killed at least 9,100 people and sickened hundreds of thousands more. Scientists traced the source of the waterborne disease to a U.N. base.

Some U.N. troops also have been implicated in a sexual abuse scandal, including a sex ring that exploited Haitian children, according to an internal U.N. report obtained by the Associated Press.

“You’re talking about a mission of foreign soldiers who were ostensibly sent to protect people and caused quite a bit of harm to those they were meant to protect,” said Johnston, the research associate, adding that a U.N. resolution passed last year to tackle the issue of abuse by peacekeepers does little to hold them accountable.

“It’s very troubling that MINUSTAH is withdrawing from Haiti without a real concrete commitment to repair harms that it has caused,” said Beatrice Lindstrom, a staff attorney at the Boston-based Institute for Justice and Democracy in Haiti.

Lindstrom’s group is among several organizations that filed a federal class-action lawsuit seeking compensation for the cholera victims. But “promises to provide a remedy to the victims remain unfilled” she said.

The U.N. is trying to raise $400 million to compensate the cholera victims, including money to support survivors and renovate the shoddy water and sanitation infrastructure. But so far, less than 2% of the total has been raised, according to the agency’s data.

With regard to the sexual abuse scandal, Honoré said the U.N. had taken steps to sanction the abusers, that a zero tolerance policy was now in place, and support and advocacy for the victims were continuing.

Positive gains lay behind and pitfalls ahead

Despite these setbacks, U.N. officials praise the peacekeeping mission as a success. Accomplishments include training police personnel, creating a law enforcement office dedicated to addressing sexual and gender-based violence, reestablishing law and order in the capital, undertaking humanitarian work, helping to draft a law aimed at increasing judicial independence, strengthening the nation’s human rights institution and bolstering the renewal of democratic institutions.

“Just the presence of those troops kept the Haitian political scene in balance,” said Maguire, the professor, who in 2000 served as Haiti specialist in the U.S. State Department’s Bureau of Western Hemisphere Affairs. “There’s always the chance and risk in Haiti that a coup d’etat can occur against the government in power, especially when the leader of the country is away. The U.N. effectively put an umbrella over Haiti and kept it a politically stable place.”

The peacekeepers were also valuable in providing logistics and manpower during catastrophic emergencies in Haiti, which since 2000 has endured repeated natural disasters including mudslides, hurricanes and a 7.0 earthquake in 2010 that killed at least 220,000 people.

Honoré cautioned that Haiti would continue to need international assistance following the peacekeepers’ departure and U.N. humanitarian programs, such as those focused on development, education and children, would persist, she said.

Further progress was still needed in areas such as the internal management and oversight of the national police and the force’s geographical reach, U.N. officials said.

Analysts warned of other potential pitfalls that could hinder Haiti’s advancement in the absence of peacekeepers, including the re-creation of the Haitian army.

Aristide disbanded the force in 1990s, but Michel Martelly, who ruled the country from 2011 to 2016, launched initial steps to restore it.

“Now without any soldiers there from the U.N. this will undoubtedly give more push among those who want to create a Haitian army to do so,” Maguire said. “The presence of a Haitian army is a particularly problematic and dangerous thing. There is the long history of the Haitian army becoming directly involved in politics and being used as a tool by political leaders to destabilize governments.”

In Miami’s Little Haiti, home to a sizable population of Haitian émigrés, news of the U.N. mission’s departure was greeted with satisfaction, relief and nonchalance.

“Growing up Haitian American, we always heard negative stories about the peacekeepers” from family members who remain on the island, Delifort said. “Stories of mistreatment and stories of them not even doing the peacekeeping.”

While conceding that some Haitian leaders had caused the country harm by exploiting their people and resources, many Haitians pointed to outside influences as being equally responsible for the nation’s woes.

Independence of the world’s first black republic was met with isolation, meddling and exploitation from the U.S. and France.

Sandy Dorsainvil, a Miami-based consultant, said the departure of the peacekeepers would allow the new government “ to have an opportunity to take full responsibility and run the country.”

“As one of the first countries to be free in the Western Hemisphere, it’s disheartening to see that we’ve gotten to the point where it seems as if we need help from other people to govern ourselves,” Dorsainvil said. “And I don’t think that’s necessary. It’s become more of a hindrance. All of these outside nations having a presence in Haiti has not helped the country move forward.”

“That they’re leaving, it’s not too soon,” artist Edouard Duval Carrie said of the peacekeepers. “Haiti has to grow up. We can’t be under tutelage all the time.”