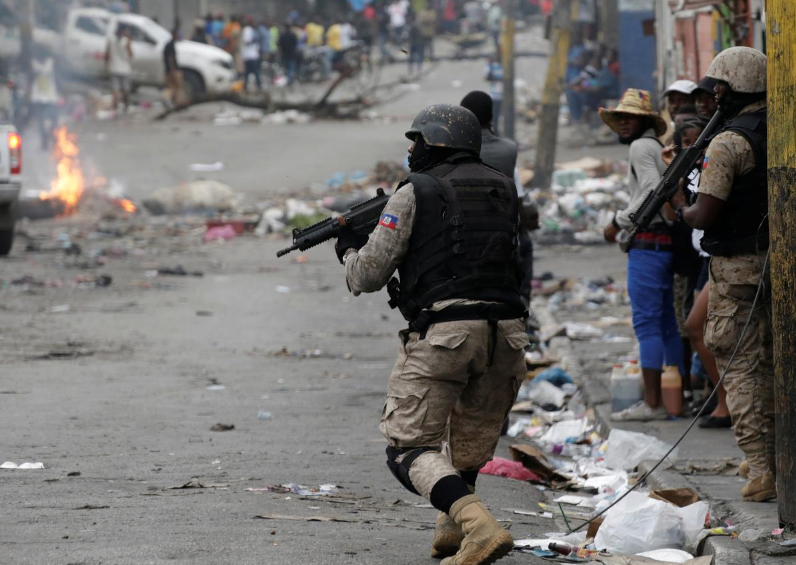 A correction to what I sent earlier… black market gas in Haiti is currently selling for between US$13 and $15 a gallon, while the cost at the pumps has not changed for some time. I should have highlighted the severe shortage of fuel and resulting black market prices, and not made an inaccurate blanket statement about rising fuel prices.
While the corruption is the same and the net impact the same, I am remiss in not being accurate on pump prices.
The accurate replacement formula is: rampant and uncontrolled corruption = severe fuel shortages + high black market fuel prices + devalued currency + exceptionally high food prices.
But please remember that the hope part that I closed with below still stands!
Regards,
ORIGINAL (uncorrected) NEWSLETTER TEXT:
The citizens of Haiti have taken to the streets en masse to demand the resignation of President Jovenel Moïse, and the regular functioning of life throughout the country has come to a near standstill. There are literally hundreds of roadblocks on most days in and around cities and towns, all mounted in an effort to put pressure on the president to resign.
Huge protests have become the norm, with radical elements using these otherwise boisterous but peaceful gatherings as cover to destroy property. Businesses and schools are closed. Government offices are not able to function. And there is a tension so thick and pervasive it seems like a dark otherworldly shadow at the periphery of your vision. Ever present and almost visible, but never quite in focus.
I am sharing my observations with the goal of helping to shed some light on what is happening on the ground in Haiti, while leaving the political commentary to others more qualified.
At the heart of the current situation is how corruption has led to the extraordinary rise in the price of fuel and food, both of which cost more, relative to incomes, than in traditionally expensive cities like New York, London or Paris.
While the full story goes back to 1804 when the world turned its back on the first and only nation to be founded by former slaves, the current cycle of dysfunction can be traced to a 2006 agreement called PetroCaribe. This deal allowed Haiti and several other Caribbean nations to buy fuel from Venezuela and pay 60% up front, with the remaining 40% to be paid back over 25 years at 1% interest.
Not only did this arrangement save the Haitian government a lot of money, it actually earned a great deal. This is because the government has a monopoly on importing fuel and they sold that 40% at a significant profit. The commitment to Venezuela was that these funds–the combined savings and additional income–were to be used for infrastructure and social programs to improve agriculture, health, and education. But at least $2 billion of the PetroCaribe windfall was misused, misappropriated and outright stolen by the very officials, in three successive administrations, who were charged with using it to improve the lives of their fellow citizens.
Then last year the PetroCaribe program stopped when Venezuela’s oil production tanked. The Haitian government had to start buying fuel elsewhere at market rates and with no subsidies or loans available for its purchase. Since then they have never had enough cash on hand to buy the full amount of fuel the country needs. Shortages have been getting worse and worse. Gas, diesel and kerosene prices have been getting higher and higher, both because of shortages and because the government can’t afford to make up for the subsidies that previously helped to keep prices low.
As fuel prices go up, so too does the cost of just about everything. This leads to exports being more expensive and contributing less to the economy. The combined effect of all this has been a gradual but steady devaluation of the Haitian gourde over the past few years. This, in turn, has led to astronomical increases in the price of food, because more than 50% of the food consumed in Haiti is imported.
The details of wrongdoing and exactly which individuals are responsible may not be widely understood or agreed upon, but there is a broad consensus among Haitians from every walk of life that rampant corruption has led to huge increases in the price of fuel and food. President Moïse may be the poster boy for the ills that currently afflict Haiti, but his removal is no guarantee of a significant short-term course correction in the country’s governance.
So why am I so committed to a country that, while beautiful and enchanting, is in such a mess?
The answer is that I know so many smart, brave and committed Haitians, particularly young people, who are making tremendous strides in business, education, the arts, agriculture and public service. But like many places in our present world, their voices and the positive advances they are making are often lost in a cacophony of the negative. These powerful change agents have not yet had a chance to come together to form a movement that will transform Haiti, but I believe the time for that coming together is closer than most jaded pundits are even willing to consider.
We need to be fully aware and unflinchingly honest about the many problems that currently beset Haiti. Otherwise we can’t begin to navigate the physical and political roadblocks in the process of trying to make a difference. It isn’t easy, but I keep hearing echoes of the many voices rising up to form the chorus of Haiti’s future. I invite you listen and feel the rhythm.
Regards,
Hugh Locke
President, Smallholder Farmers Alliance + Impact Farming