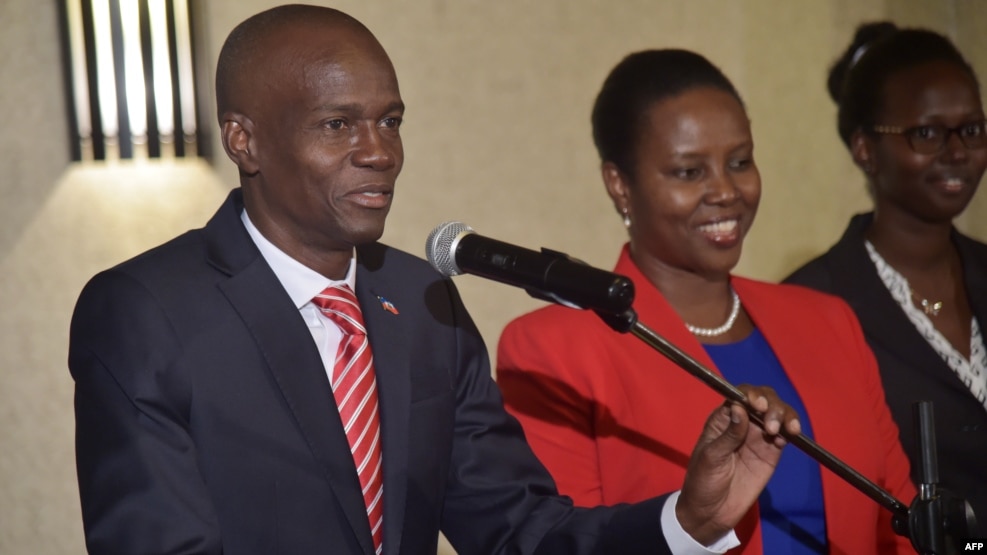 Haitian President-elect Jovenel Moise of PHTK political party, gives a speech, in Petion Ville, a suburb of the Haitian capital of Port-au-Prince on Jan. 3, 2017.

President Donald Trump is sending a U.S. delegation to Haiti to attend the inauguration of President-elect Jovenel Moïse on Tuesday.

A White House statement says Under Secretary for Political Affairs Thomas Shannon will lead the Presidential delegation that also incudes the U.S. Ambassador to Haiti, Peter Mulrean, Acting Principal Deputy Assistant Secretary of State for Western Hemisphere Affairs Kenneth Merten and Omarosa Manigault, the Assistant to the President and Director of Communications for the Office of Public Liaison.

Manigault was a contestant on the reality television show “The Celebrity Apprentice” when it was hosted by Trump.

In a recent interview with Reuters news agency, he drew parallels between himself and U.S. President Trump.

“President Trump and I are entrepreneurs, and all an entrepreneur wants is results,” Moïse said. “And therefore I hope we’ll put everything in place to make sure we deliver for our peoples.”

Moïse has said as president he would govern inclusively. “We have to work together,” he told VOA in an interview in Haiti’s capital on the eve of his election victory.

The Haitian businessman, 48, faces lingering suspicions related to his financial dealings. Late last month, he spent four hours in a closed Port-au-Prince courtroom answering questions about purported money laundering. He has denied the allegation, claiming it is politically motivated.

“The Haitian businessman, 48, faces lingering suspicions related to his financial dealings. Late last month, he spent four hours in a closed Port-au-Prince courtroom answering questions about purported money laundering. He has denied the allegation, claiming it is politically motivated.”
This entire line of thought was non-existent until the Lavalas/Aristide/Privert axis created it in their attempt to derail, or poison the situation.
No one has bothered to mention the one billion, or so, stolen or generated via the cocaine bushiness, by Aristide.
Or the millions stolen by Preval and Jude Celestin.
Or, the millions stolen by Privert, and his associates, over the pat 12 months.
In fact, the court has stated that there is no evidence of any wrong-doing by Jovel.
Having said that, Privert, Aristide, Lavalas will continue to toss dirst.
Throw enough and some will stick.
That is their plan for the future.