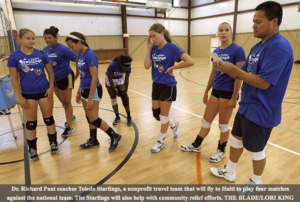 Three years have passed since the Haiti earthquake.

The devastation and destruction left behind by the natural disaster drew global attention and plenty of assistance from people who were moved by television footage and streaming Internet video of lives lost in collapsed buildings, as well as displaced residents forced to live in makeshift tent communities.

Toledoan Dr. Richard Paat was among those who felt the need to do what he could for those Haitians in need after the Jan. 12, 2010, earthquake that registered 7.0 magnitude. Paat will make his fifth trip to Haiti, from Sunday through July 12, since the quake.

However, this venture to Haiti — the western half of the island of Hispaniola that covers about 27,750 square miles — will be different from the others.

“This is about development and helping kids with school and Haiti’s national volleyball team,” Paat said.

Paat is also the head coach for the Toledo Starlings volleyball club, which is a nonprofit travel team for players between the ages of 14-17. He is traveling to Haiti with nine members of the team, which recently placed third out of more than 100 teams in a national tournament held in San Diego.

Paat, a St. John’s Jesuit and University of Toledo alumnus, has scheduled the group to play against a Haiti national team in four matches. The group is also delivering medical and school supplies, clothing and shoes, and water-filtration devices to people still recovering.

Paat thinks the group, composed of players from economically limited to middle-class backgrounds, will gain more than just experience on the volleyball court. This is a trip to provide the local teens with a life perspective beyond the boundaries of life in northwest Ohio and southeast Michigan.

“It will be an eye-opener,” Paat said. “They’ll see what extreme poverty is. Some of them don’t have a lot, but what they do have, they’ll see it is head and shoulders above what people have in Haiti.”

To help pay for the trip, the team held a fund-raiser recently at Zia’s Restaurant, where sports memorabilia, including a volleyball signed by Olympic team members, were auctioned off. The event raised more than $8,000.

Jada Flynt has been a member of the Starlings for several years and is team captain. The Central Catholic High School senior is excited about going to Haiti even though the trip drew concerns from her mother. She had to convince her mother that traveling to Haiti with her teammates was a “once-in-a-lifetime” opportunity.

“It’s not just about playing volleyball, it’ll be about the entire experience,” Flynt said. “Hopefully, it will make me not just a better volleyball player, but also a better person.”

The feeling seems to be shared among the Starlings’ teammates. Katelyn Barnes believes the trip will be more worthwhile than any other the group has taken, including their recent tournament in San Diego.

“I’m really excited to help out with the Haiti kids,” said Barnes, a 16-year-old Bowsher junior. “There are a lot of underprivileged kids. It’s a whole different world.”

Barnes and her teammates are traveling with plenty of items to hand out to those in need. Among the clothing items are Toledo Mud Hens baseball caps and Toledo Starlings jerseys. The also group will spend time at a grade school built after the earthquake.

“We’ll be helping out at the school and will be giving them water filtration systems,” said Barnes, the team’s setter. “I’m more excited than nervous. I think it will be a good experience.”

Central Catholic senior Sierra Syeh [pronounced “say”] was like most of her teammates, who had to get a passport before making their first flight out of the country.

“It’s a new experience for me, and I’ll get a chance to see how other people live in another country, and see how fortunate we are because we have what we have here,” Syeh said.

The team’s top defensive player said the trip is also a chance to visit another country before taking a trip to Africa in an upcoming year to visit relatives in Liberia, which is where her father is from.

“It’s a once-in-a-lifetime experience to look back on 10 years from now,” Syeh said. “I’m grateful for Starlings to be able to go on this trip.”