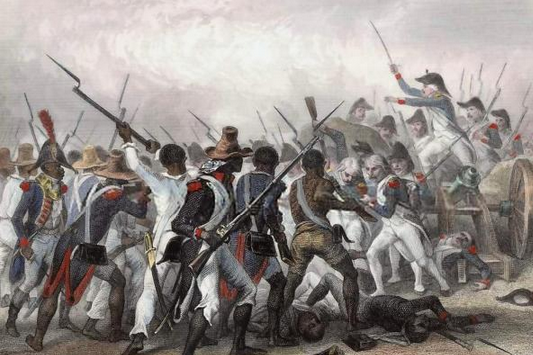 Today is an important date when it comes to understanding the legacy of slavery in the Americas. In a statement shared with Sojourners, Semegnish Asfaw Grosjean of the World Council of Churches said:

UNESCO’s (United Nations Educational, Scientific and Cultural Organization) annual Slavery Remembrance Dayis held on 23 August. On this day in 1791, an uprising of enslaved Africans on the island of Saint Domingue (modern Haiti) began. The uprising was finally successful at establishing Haiti’s independence from the French in 1804 and was the only uprising to give rise to a state ruled by former slaves. It was a crucial event in the fight to end the European transatlantic slave trade. The date has been designated by UNESCO as Slavery Remembrance Day, a reminder that enslaved Africans were the main agents of their own liberation.

Audrey Azoulay, Director-General of UNESCO, has released a message for this occasion:

This 23 August, we honour the memory of the men and women who, in Saint-Domingue in 1791, revolted and paved the way for the end of slavery and dehumanization. We honour their memory and that of all the other victims of slavery, for whom they stand. (…) To draw lessons from this history, we must lay this system bare, deconstruct the rhetorical and pseudoscientific mechanisms used to justify it; we must refuse to accept any concession or apologia which itself constitutes a compromising of principles. Such lucidity is the fundamental requirement for the reconciliation of memory and the fight against all present-day forms of enslavement, which continue to affect millions of people, particularly women and children.

Mikie A. Roberts of the World Council of Churches also shared a prayer of remembrance for this day:

Eternal God, you are not a stranger to humanity’s suffering. We ask of you today to bless those who have suffered and continue to suffer from systemic racism. We bring before you as well as those who even now are victims of modern-day slavery, in whatever form it exists. In our fight for justice, we ask of you to strengthen us when we grow weary. Renew our zeal and commitment when we feel hopeless and helpless. Equip and empower us as we combat and challenge systems and ideologies to end racism in our societies. Help us to work together for just and inclusive societies where all can live with respect, dignity and freedom. Amen.