As the Democratic Republic of Congo prepares for just its second general elections in four decades on 28 November, Congolese affairs analyst Theodore Trefon considers whether this failed state, still recovering from a war which led to an estimated four million deaths, can ever be rebuilt.

People in the Democratic Republic of Congo expect very little from the state, government or civil servants.

In fact, ordinary Congolese often repeat expressions like “the state is dying but not yet dead” or “the state is ever present but completely useless”.

It seems they also expect little from the upcoming elections and there can be little argument that DR Congo is indeed a failed state.

The government is unable to provide decent education or health services.

The country – two-thirds of the size of western Europe – is a battleground.

The citizens of DR Congo pray to be delivered from the brutal militias that still control parts of the eastern provinces, where rape has become so commonplace that one senior UN official called the country “the rape capital of the world”.

The Democratic Republic of Congo covers 2,344,858 square km of land in the centre of Africa, making it the 12th largest country in the world.

I asked a university colleague if he thought things could get worse.

“When you are rock bottom, you can still dig deeper,” was his response.

Public administration is in shambles. Civil servants have mutated into predators.

Ferdinand Munguna is a retired railway worker in Lubumbashi, the mineral capital of DR Congo in the south of the country.

He has to bribe the man working in the pension office who requires “motivation” before processing the old man’s file. Mr Munguna complains that his pension is “hardly enough to buy soap”.

Starting a business in DR Congo takes 65 days compared to the sub-Saharan African average of 40 days. In neighbouring Rwanda it takes three days.

And guess which country has one of the worst air safety records worldwide?

The recently released UNDP report on human development indicators put the former Belgian colony at the bottom of the 187 countries it surveyed.

On the political front, President Joseph Kabila has shown much more interest in regime consolidation than implementing his five-point development agenda – which most Congolese consider more as a political slogan than a development initiative.

When criticised, Mr Kabila’s henchmen resort to the ultimate force of dissuasion.

Take Zoe Kabila, the president’s brother, who ordered his Republican Guard escort to beat up two traffic officers because they did not give his 4X4 priority.

Usually immune to the brutality of the security forces, even people in Kinshasa were shocked by this incident at a busy downtown intersection.

Numerous cases of journalist beatings and killings have also been reported.

Poor leadership is a major problem for DR Congo.

There are few figures on the political landscape with vision, leaders able to bring an end to corrupt government, reduce poverty, solve the country’s security problems or improve the well-being of ordinary people.

But I think that this is unfair.

While it is important to maintain pressure on Kinshasa’s unabashedly corrupt political establishment, we also have to consider the country’s troubled past.

Few societies have accumulated so many woes.

Those old enough to remember say the whip and chain is what they associate most with Belgian colonialism.

Others however are nostalgic and wish for the Belgians to return to solve the country’s problems. 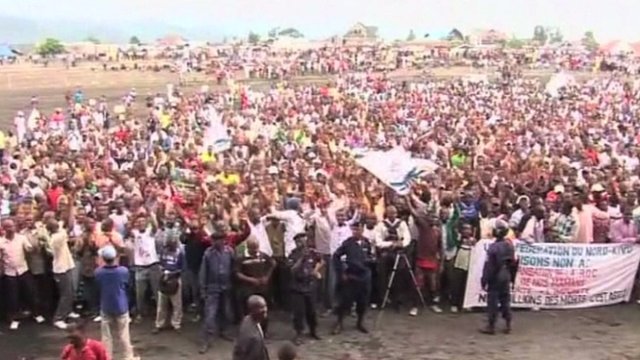 He ruled what was then named Zaire for 32 years, supported by the West because of Cold War strategic interests.

Two wars – the liberation war that toppled Mobutu and “Africa’s first world war”, from 1997-2002 – are overwhelming obstacles to development, state-building and well-being.

DR Congo is also victim to what is commonly referred to as “the resource curse”. The central government cannot control borders with its nine neighbours.

Much of DR Congo’s coltan, a mineral used in computers and mobiles, is illegally exported through Rwanda. Precious tropical hardwoods are siphoned off through Uganda.

DR Congo’s financial and technical partners – the so called “international community” – are also to blame.

They have no master plan for reform. They do not share a common vision and often implement contradictory programmes.

Belgium supported the idea of decentralisation arguing that it could bring government accountability down to the grassroots level. The World Bank blocked the process. 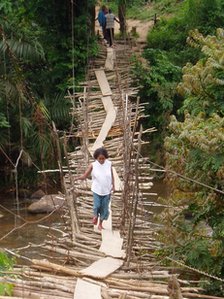 DR Congo’s road to development is paved with good intentions

Bank experts have some control of the treasury in Kinshasa but they have absolutely no idea of how resources in the provinces are managed.

Data collection is a surreal concept in DR Congo – many offices do not have electricity, let alone computers.

Absence of national sovereignty is another hallmark of a failed state.

DR Congo is a country under international trusteeship. Important decisions are taken by World Bank technocrats, UN officials and increasingly by international NGOs.

When the electoral campaign officially opened last month, candidates travelled to Europe and the US to garner support.

The UN mission, Monusco, is playing a key logistical role in the elections by transporting ballot boxes across the vast nation. People would not be able to vote without this kind of support.

Whatever accountability there is in DR Congo is directed towards international backers, not the Congolese people.

Congolese authorities have abdicated from the development agenda.

Road rehabilitation and bridge building have been delegated to the World Bank and Belgian Technical Cooperation.

Monusco is supposed to look after the security sector. The World Health Organization and medical NGOs try to deal with the public health challenges.

The UK is involved in reinforcing governance programmes, while churches provide primary education.

The state is an absentee landlord – outside partners do its work.

So DR Congo is on an artificial life-support system. But replacing the state, or acting on its behalf, is not viable in the long-term. It undermines state-building momentum.

DR Congo and its partners are clearly confronted by the tragedy of powerlessness.

The system is such that when things do not work, go wrong or do not move forward, it is never really anyone’s fault.

There are plenty of good excuses. A colleague told me when asked why he did not show up for an appointment: “Well, there was an eclipse that day.”

While DR Congo is clearly a failed state, Congolese society has not failed.

On the contrary it is strong, vibrant, dynamic, tolerant and generous. People have a sense of taking charge of their own destinies.

Women form rotating credit systems to compensate for the absence of an accessible banking system.

Farmers band together to hire a lorry to get their cassava or charcoal from the central city of Kikwit to market in Kinshasa.

Bebe, who lives in the Paris suburb of Griney, sends money home to Kasai via Western Union. Some months it contributes to school fees, others it pays for medicines for her ailing mother-in-law.

Her father will spend some of it on Primus, the beer of choice in Kinshasa.

“Elikia” means hope in Lingala and there is much of it throughout the country.

Hopes for positive change will come from the people, not from the Congolese political establishment, and certainly not from outside interventions.

Theodore Trefon is senior researcher at the Royal Museum for Central Africa and author of the blog Congo Masquerade: The political culture of aid inefficiency and reform failure.

On 25 November, the BBC World Service is broadcasting a special one-hour debate in front of a Kinshasa audience: Is DR Congo a failed state? Tune in at 1900 GMT.